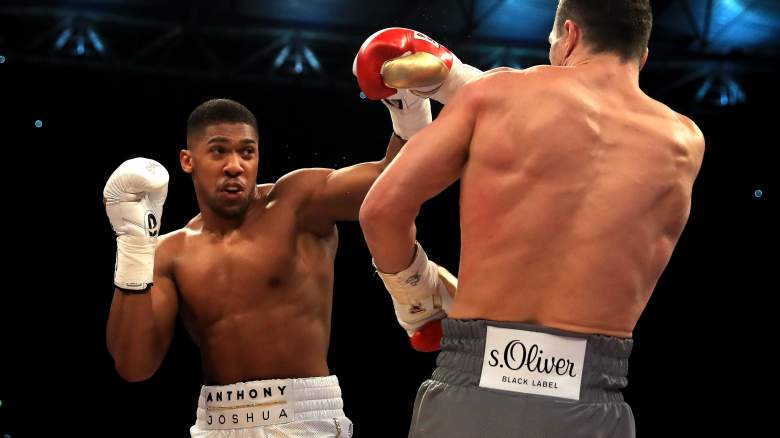 Those were the final fireworks in what was a scintillating back-and-forth battle that was full of them.

Joshua first knocked Klitschko to the canvas in the fifth round:

But Dr. Steelhammer returned the favor in the very next round:

It will be interesting to see what happens next for the victor, who retained his IBF heavyweight title and won the WBA and IBO titles vacated by Tyson Fury after he tested positive for cocaine.

Luis Ortiz, who is 27-0 with 23 knockouts, is the WBA No. 1 ranked heavyweight and stands as the mandatory challenger. However, before this fight, the WBA confirmed that a “special permit” could be granted if the winner were to seek a different challenger.

“It’s in writing that Luis Ortiz should be the next opponent for the winner,” said WBA president Gilberto J. Mendoza. “I know sometimes boxing allows things to happen in a different way – it would have to be something very important to consider [Ortiz not fighting the winner].”

That something special could be Deontay Wilder. The WBC heavyweight champ was in attendance at Wembley on Saturday, and it wasn’t as a fan.

“I am for sure going there to scout,” Wilder said. “All the other heavyweights come to my fights. They’re not just there to be a fan. They’re there to scout and look for different openings and certain signs. I am definitely going over to scout. And maybe we can make a mega-unification bout.”

Of course, Saturday night’s battle was an instant classic and perhaps the best heavyweight bout this sport has seen in the last decade, and as such, a rematch would surely be a compelling option.

If a rematch doesn’t come to fruition, and if Joshua and Wilder don’t meet in an unification bout, there is another option:

"Tyson Fury where you at baby!" – Joshua

No matter what happens next, though, one thing is clear: After a long number of stale years, the heavyweight division appears to be returning to must-see status.