As Leonard Fournette heads to the Jacksonville Jaguars, his daughter, Lyric, remains by his side. Leonard just added a baby boy, Leonard IV, to the mix as well.

Heavy has learned that Leonard and Lyric’s mother, Jamie Jones, are no longer together but have a working relationship to raise Lyric. Leonard IV is with a different mother who prefers to stay out of the spotlight and raise their new son.

BUGA Nation, a phrase created by the Fournette family, is headed to the next level. BUGA stands for “Being United Generates Attitude” a mindset that Leonard has tried to embody throughout his life. Both Leonard and Jamie’s family remain heavily involved in helping the raise Lyric.

There could not be a bigger fan of Lyric than her father, Leonard. He uses both his Twitter and Instagram accounts to show off his daughter.

1. Jamie Met Leonard Through Her Brother

According to The Advocate, the two met through Jamie’s older brother. Jamie and Lyric live in New Orleans with her family who are heavily involved in helping raise the kids.

Jamie does use Twitter to talk about an unnamed love interest but it is unclear who that person is. Here is a sampling of some of her tweets:

You do it for the love of you and I❤️

I'm really a big brat never want my baby to leave me ?

I found true love in you .?

My man is my bestfriend ❤️

2. Lyric Is Almost As Famous as Her Father

It is not uncommon for Leonard to get notes on social media when Lyric is seen out in public with Jamie. He explained his daughter’s stardom to The Advocate.

“She’s really more famous than me,” Leonard told The Advocate.

Leonard is doing his part to make sure his daughter is spoiled. She has multiple kids cars including an Audi and Mini Cooper.

Welcome my young boy to this world L4 pic.twitter.com/qAfhpVfBkV

Leonard will have his hands full not only with learning a new playbook but also with the birth of a new son. Leonard tweeted out a photo of the newborn on March 6, 2017. The caption read: “Welcome my young boy to this world L4.” It sounds like Leonard and Jamie named the boy after Leonard hence the term “L4”.

The birth fulfills Leonard’s dream for a boy as he told The Advocate in the summer of 2016.

4. Lyric Was Born Five Weeks Premature With the Umbilical Cord Tied Around Her Neck

It is hard to blame Leonard for posting so many photos of his daughter once you know the backstory. There were complications with Lyric’s birth. She came premature and when she was born the umbilical cord was tied around her neck. The Advocate recounts the first few week’s of Lyric’s life.

She was born five weeks premature, weighing 3 pounds, 2 ounces — less than half the weight of an average newborn child and the size of a half-gallon of milk. She came so quickly that doctors had no time to administer pain relief medication to her mother, Jamie Jones.

When she did arrive, Lyric’s umbilical cord was wrapped around her neck, depriving her of precious oxygen as her father, five days removed from a breakout performance in the Music City Bowl, nervously watched in the delivery room.

Lyric spent the next week in the hospital, fed via a tube that ran through her nose and down her throat.

This is how fatherhood began for Leonard Fournette.

Much to the happiness of her parents, Lyric turned into a healthy little girl who loves Mambas candy and Rice Krispies treats.

Jamie and Leonard became accustomed to FaceTime during his time at Baton Rouge. Jamie lives in New Orleans with her parents who help take care of the kids. Leonard calls Jamie and Lyric every morning as they begin their day.

“If I FaceTime someone else, she says, ‘Dad!’ ” Jamie told The Advocate.

Jamie is studying business at Nunez Community College. Her parents along with Leonard’s family enjoy helping out with the kids as they are able. Leonard’s mother, Lory Fournette, explained the closeness of the two families.

“It’s been a joy. We’re all close, Jamie’s parents and us. Every Sunday we go over there and have Sunday dinner. We see Lyric at least five times a week,” Lory told The Advocate.

The original edition of this story reported Jamie Jones and Leonard Fournette were still dating. Heavy has since learned through several sources they are no longer together and his newest baby is with a different mother. They still have working relationship to raise their daughter, Lyric. 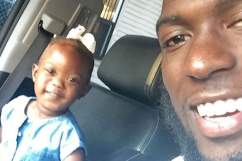