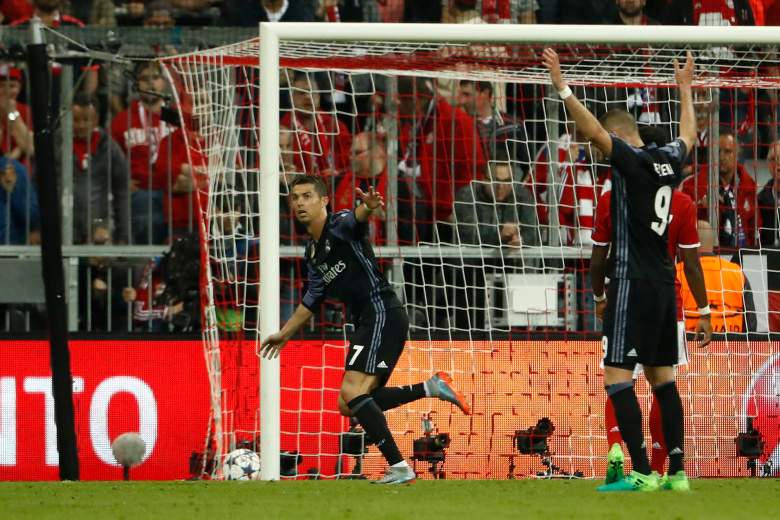 Real Madrid came up with the 2-1 victory over Bayern Munich on the first leg of the Champions League Quarter-final. Cristiano Ronaldo lived up to his reputation as he powered Real to a comeback by scoring two straight goals in the second half. The two teams will square off again next Tuesday.

Bayern controlled the first half and entered halftime with a 1-0 lead. The second half was all Real Madrid as Ronaldo scored a goal less than two minutes after the half began. Ronaldo pulled with an injury at the very end of the match and his status will be worth monitoring as the teams look towards the rematch.

Things really shifted for Bayern after Javi Martinez received his second yellow card at the 60′ mark forcing Bayern to play with 10 men for the final 30 minutes of the match.

Here’s how Real Madrid came away with the win.

After numerous failed corner kick opportunities, Bayern was finally able to convert at the 24′ mark. Vidal was inside the box unmarked and scored off a beautiful header that found the top of the net. It was the first goal of the game in a match that featured little opportunities for Real Madrid early on. Bayern controlled possession to start the match.

Bayern Missed a Penalty Kick After a Questionable Call

Towards the end of the first half, the referees gave Real Madrid a yellow card for a hand ball. The replays showed the ball hit the shoulder of the Real player and likely should have been a no-call. This led to a penalty kick for Vidal that would have given both he and Bayern two goals. He sailed the ball over the net on the penalty kick. As they say in the basketball world, “ball don’t lie”.

Ronaldo Evened the Score at the Start of the 2nd Half

Ronaldo needed less than two minutes in the second half to even things up for Real. Real Madrid had great spacing that allowed Ronaldo to convert on a chip shot that ended Ronaldo’s Champions League drought. Real Madrid may not have had as many opportunities as Bayern early on, but the score was even just over the halfway mark.

Javi Martinez Received a Red Card at the 60′ Mark

Martinez clipped Ronaldo at the 60′ mark causing him to receive his second yellow card. Martinez was sent off leaving Bayern to play with 10 men for the final 30 minutes of the match. The momentum was all on Real Madrid’s side at the start of the second half.

Ronaldo Scored His 2nd Goal of the Match

Ronaldo gave Real Madrid the lead at the 76′ as he was able to convert off a beautiful pass. Ronaldo got the ball in the middle of the box and slid to hit the ball with the bottom of his boot. The ball slid between Bayern’s goalie’s legs to give Real their first lead of the game.