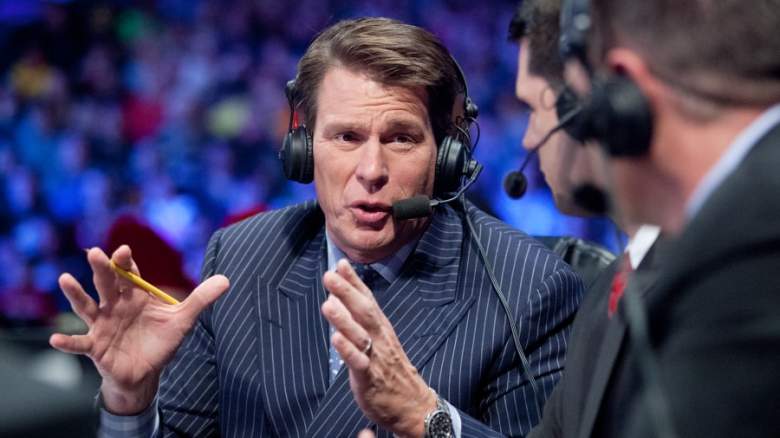 After a bullying scandal that caused WWE fans to demand his firing, John Layfield was invited to co-host Talking Smack this week.

Layfield, also known as “JBL,” was the co-host of Talking Smack on April 25th, hosting alongside Renee Young. He was filling in for Daniel Bryan, whose wife, Brie Bella, is getting ready to have a baby.

It’s unclear how permanent this is, but Renee Young referred to JBL as her “new co-host.”

No reference to the bullying scandal was made on the show, but when Renee Young asked JBL if he was ready to talk some smack, he said, “Yes, that’s what I do best!”

Layfield had been accused of bullying for years now, but fans really began to take notice following the departure of former SmackDown Live commentator Mauro Ranallo. Ranallo, who suffers from bipolar disorder, recently left the WWE, and there have been rumors that he was bullied backstage by JBL and others. Ranallo himself has not said as much, but Ranallo’s good friend Bas Rutten‏ has suggested that this is only because Ranallo has signed a non-disclosure agreement.

@andersonjim5651 there are things they call an "NDA", look into what that is, it's different then "balls"

At the same time, former ring announcer Justin Roberts recently released a book in which he alleges that JBL was a bully backstage and even once instructed some WWE employees to steal his passport.

“[E]very day I saw him, he asked me why I was still alive and told me to go kill myself,” Roberts says in the book.

Roberts expanded on this in his Reddit Ask Me Anything, saying that JBL “terrorized” people backstage.

“He terrorized me, and a lot of guys,” Roberts said. “He’d make life hell for a lot of guys. He chewed Miz and Morrison out after they won the titles for not celebrating enough.”

Layfield has dismissed all of this as Internet gossip, and the WWE has not responded to the accusations in any way.