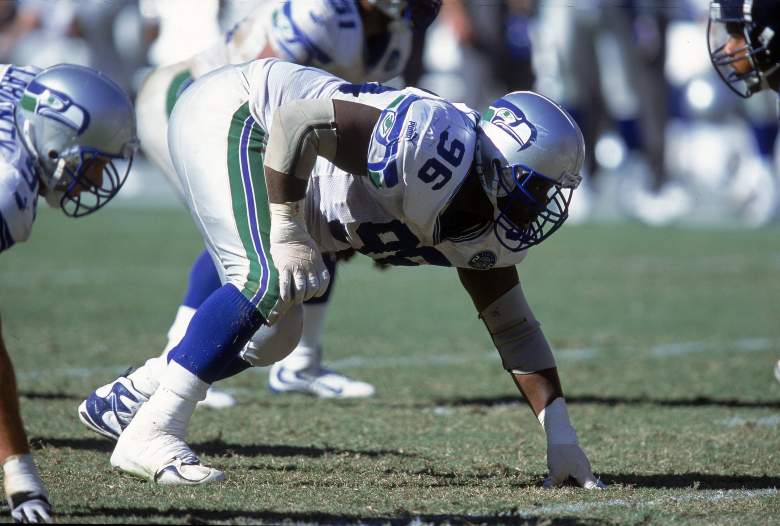 Cortez Kennedy was a legendary defensive tackle for the Seattle Seahawks. (Getty)

Hall of Famer Cortez Kennedy has passed away at the age of 48. According to TMZ, the Orlando Police Department confirmed the death of the former NFL player noting there was “nothing suspicious” about Kennedy’s passing.

In a police report obtained by The Seattle Times, the report noted a friend found Kennedy on the bedroom floor.

“She called for help. She tried to find someone to help her perform life saving rescue, but could not find anyone outside to help her and she ran back in the house and did compressions,” the report noted. According to The Seattle Times, Kenendy had been hospitalized for five days with swollen legs just two weeks prior to his death. Former teammates have noted Kennedy suffered from diabetes.

“We can confirm his passing and at this time there is nothing suspicious to report, but we are conducting an investigation regarding his unattended passing,” Guido told KOMO News.

Orlando PD tweeted out this short message confirming the reports of Kennedy’s passing:

OPD can confirm the passing of Cortez Kennedy today. Nothing suspicious to report. OPD conducting investigation into his unattended passing pic.twitter.com/0oMUim8lpw

Kennedy was a widely popular player in Seattle where he played his entire career as a Seahawk. According to 247 Sports, Kennedy’s number was retired by the Seahawks, and he is part of Seattle’s ring of honor. He was elected to the Pro Football Hall of Fame in 2012. Kennedy was originally from Wilson, Ark. and attended the University of Miami.

The defensive tackle had 58 sacks over his 11 NFL seasons starting in 153 games with the Seahawks. Kennedy’s honors were numerous including being named an eight-time Pro Bowler.

“He doesn’t have an official title [with the Saints], but I like having him around because he’s a good role model,” Loomis told The New York Times. “This is a guy who had a lot of success, was able to protect what he earned, lived a good lifestyle and has done well 15 years after his career ended.”

Loomis respected Kennedy so much he named him his son’s godfather. After Kennedy’s playing days were through, he moved back to Arkansas to raise his daughter but the family decided to move to Orlando to avoid the spotlight Kennedy received back home.

Known for his humility, Kennedy avoided the spotlight that is common for NFL players. His 1992 interview with Sports Illustrated showed this humility.

“I consider myself a football player, not an athlete,” Kennedy told Sports Illustrated.”I know where I want to go; I just need a little guidance to get there. I don’t consider myself a superstar, and I can’t imagine ever being one. I work hard every day to get better, and I get smarter and wiser. But I won’t ever take myself or my accomplishments too seriously.”

Despite his modesty, Kennedy would indeed become a superstar and was one of the best defensive tackles to play during his era.

I just got New one of my best friends Cortez Kennedy pass this morning my condolence goes out to his this is going to be hard. R.I.P TEZ

.@Seahawks and NFL Hall of Famer Cortez Kennedy has passed away. Our hearts, thoughts & prayers go out to the Kennedy family. pic.twitter.com/A1lKaskSHc

RIP Cortez Kennedy, all I remember from your career at Miami was you being a brick wall in cleats pic.twitter.com/eynJEn20VE

Terrible news on former @Seahawks defensive lineman, and Hall-Of-Famer, Cortez Kennedy. My thoughts are with his family and teammates… https://t.co/fr1BLNh9Ge

So sorry to hear about my fellow football alum Cortez Kennedy. My prayers to his family. U Family!

Here are highlights of Kennedy’s legendary playing career as well as an interview after he was inducted into the Pro Football Hall of Fame.