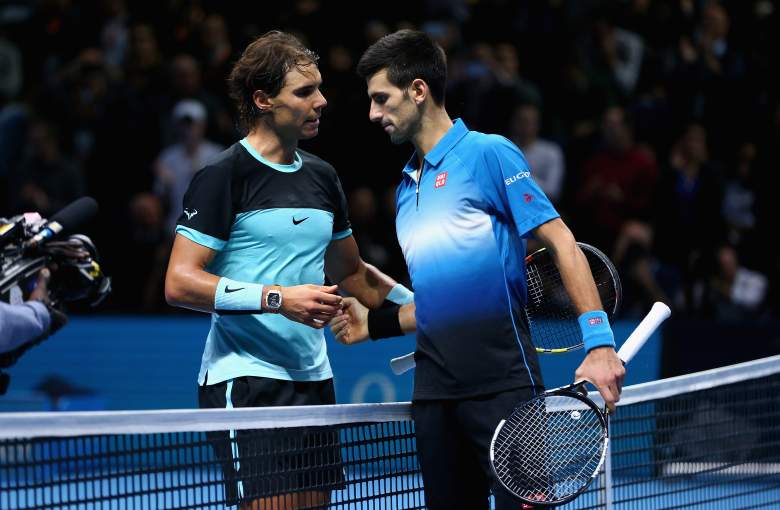 Novak Djokovic (right) and Rafael Nadal will meet for the 50th time in their careers on Saturday in Madrid. (Getty)

They meet again… the 50th time to be precise.

Serbia’s Novak Djokovic will once again find himself standing opposite Spain’s Rafael Nadal, this time in the Madrid Open semifinals on Saturday (10 a.m. ET).

Djokovic, the world’s number No. 2 player, will look to upend Nadal (No. 5.) for the eighth straight time and propel himself into his first tournament final since January. Nadal — with a victory — will make his sixth tournament final appearance this year.

Here’s everything you need to know about Saturday’s matchup:

The second-seeded Djokovic received plenty of rest on Friday after his opponent, six-seed Kei Nishikori, was forced to withdraw with a wrist injury. He doesn’t figure to have as easy a time on Saturday when he will square off against the fourth-seeded Nadal, who take care of David Goffin 7-6 (3) 6-2 on Friday, securing his place in the tournament’s semifinal.

Djokovic is 26-23 all-time against Nadal — having won their last seven contests, most recently in May of last year at the Rome Masters, 7-5, 7-6 (4). Nadal last conquered the the Belgrade native back in 2014 in the French Open final.

Nadal — a four-time Madrid Open champion — last won the tournament in 2014, defeating Nishikori after the latter retired with a back injury. The Spaniard has been on some sort of a role as of late, having won 13 matches in a row — last losing to Roger Federer in March of this year. His last tournament championship came in late April of this year, winning the Barcelona Open for the 10th time in his career.

Meanwhile, Djokovic is looking for his first tournament title since January of this year at the Qatar Open in Doha. The 29-year-old has lost four matches since his victory in Doha.