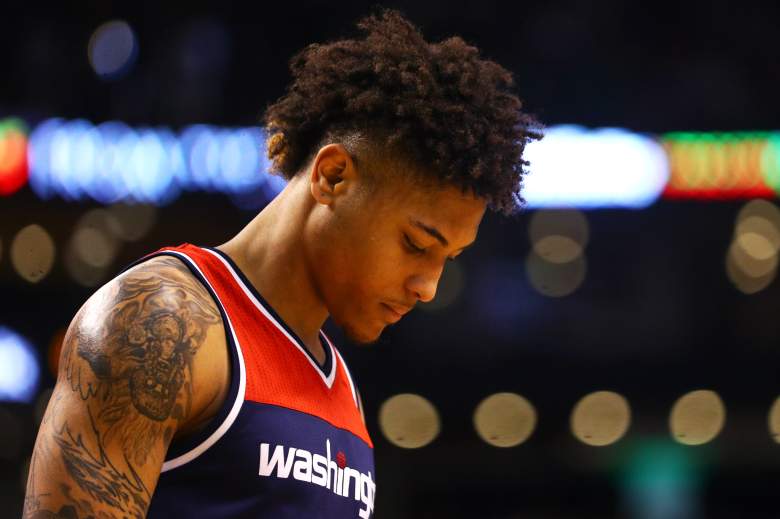 Wizards forward Kelly Oubre Jr. will miss Game 4 against the Celtics after being ejected from Game 3 for shoving Boston’s Kelly Olynyk to the floor. (Getty)

Washington Wizards forward Kelly Oubre Jr. has been suspended for one game and will miss his team’s Game 4 tilt against the Boston Celtics on Sunday after being ejected for shoving Kelly Olynyk to the floor in Game.

Yahoo Sports’ Adrian Wojnarowski was first to report the news.

The NBA is suspending Washington's Kelly Oubre for Game 4 vs. Boston for altercation with Kelly Olynyk, league sources tell @TheVertical.

In the second quarter on Thursday, Olynyk set a hard screen that flattened Oubre after he tried to go through it. Immediately after getting up, Oubre took exception and charged after Olynyk, shoving him with two arms — sending Boston’s reserve forward to the ground. Oubre was handed a flagrant 2, ejection. The Wizards took Game 3 convincingly, 116-89 but still trail the best-of-seven series 2-1.

Boston is already vowing payback though it’s unclear if they mean against Oubre or just on the scoreboard. The Celtics Gerald Green told reporters after the game on Thursday, “We’re going to beat their ass.”

The bad blood between the two teams isn’t just a product of playoff intensity though one could argue that has only heightened the tensions.

In January, the Wizards John Wall and Boston’s Jae Crowder were both fined for a confrontation following a 117-108 Celtics victory. The two exchanged words, Crowder jabbed a finger at Wall, and then Wall attempted to slap Crowder. As the teams exited to the locker room, more words were reportedly exchanged between the two.

About two weeks later, the Wizards wore all-black to the two teams’ next meeting.

“We’re wearing all black to the game. You know where we’re going with that,” Oubre told reporters back in January.

Wall elaborated on the wardrobe choice, “All black everything. A funeral.”

Boston’s Isaiah Thomas called it “cute” that the Wizards decided to all wear black.