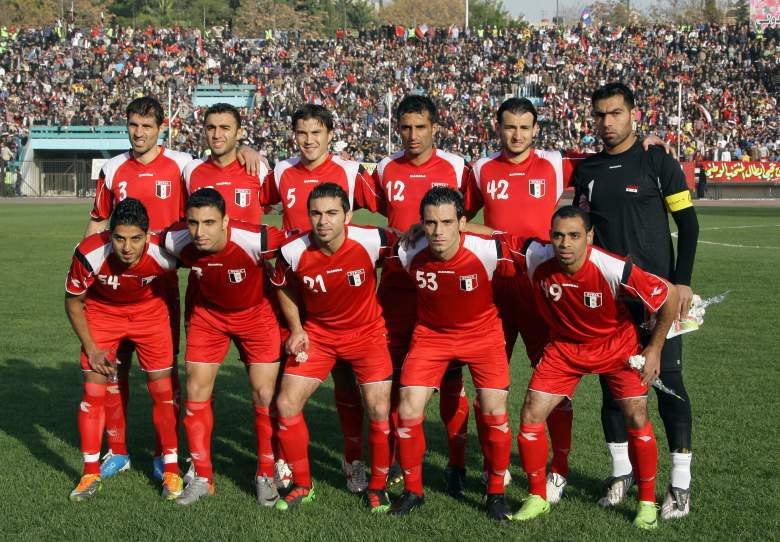 The Syrian national team players pose for a picture before a game in 2010. (Getty)

The battle surrounding Syria’s men’s soccer team has never been so brutal, and now so well-documented.

Thanks to an E:60 feature by ESPN and senior writer Steve Fainaru, the stories surrounding the intense circumstances in the country have finally come to light.

The current unrest started afterwidespread protests in 2011 of Syria President Bashar al-Assad and his regime began. Assad sent the military to put a forcible end to the protests, and demonstrators were removed, killed and violently suppressed.

Defectors of the Syrian army formed the Free Syrian Army and started fighting government forces. By June 2013, at least 100,000 people — including 11,000 children — had been killed, United Nations statistics showed.

Since 2011, 470,000 Syrians have died and life expectancy in the country has decreased from 70-years old to just 55. The country currently has about 12 million displaced people — half of its 2011 population.

Some of those same players say that they simply don’t have a choice but to lace up their cleats and take the pitch to play for Syria, or risk death.

1. Many Consider the Team Backed by its Harsh Government 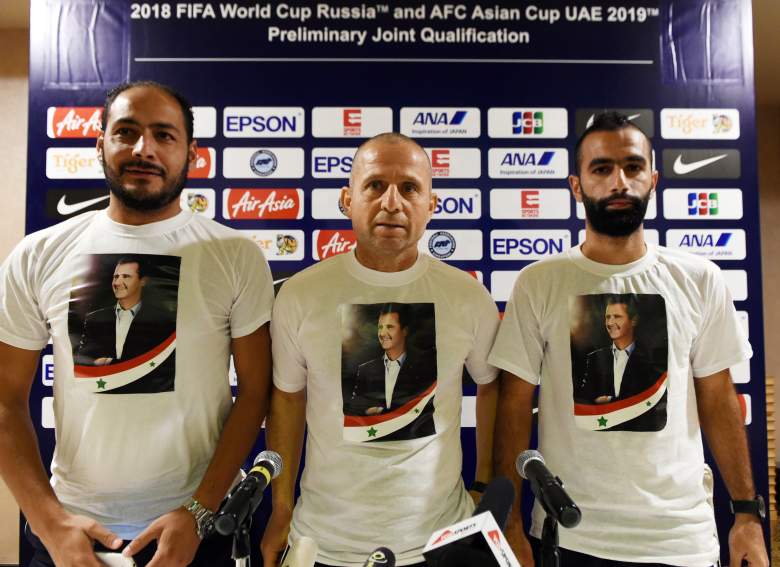 Syria’s head coach Fajr Ibrahim, center, and his player Osama Omari, right, wear t-shirts with a portrait of their President Bashar al-Assad after their pre-match press conference in 2015. (Getty)

With such turmoil occurring in the country, the team has been viewed as a promotional tool for Assad and his harsh regime.

ESPN launched a full investigation into the matter in fall 2016 and in one year earlier, a 20-page document titled “War Crimes against Syrian Football Players” was dropped off at FIFA headquarters. The document showed evidence that the country was in direct violation of FIFA’s rules that prohibit political interference in things related to soccer.

The rules have been used over 20 times to ban and suspend countries from playing internationally. However, FIFA hasn’t acted on the allegations against Syria, saying that there are “tragic circumstances” in Syria that “go far beyond the domain of sporting matters,” adding that the conflict is beyond its control.

“There is a contradiction between FIFA’s decisions and its rules,” former Syrian soccer player Ayman Kasheet said in the ESPN investigative article. “They issue a directive to freeze a federation because of political interference, while at the same time there is all-out war occurring in a country where stadiums are being used to store military equipment, where children and soccer players under 18 years of age are dying, where soccer players are being thrown in prison. All this is taking place and there is abundant proof, but where is the decision? This is hypocrisy.”

There are many signs that Assad and his government have a direct relationship with the club. In a press conference in November 2015, the team spokesman, then-coach Fajer Ebrahim and a player showed up wearing T-shirts that had a photo of Assad on the front.

On numerous occasions, Ebrahim and the spokesperson have gone out of their way to since Assad’s praises. The coach has called Assad the “best man in the world” and started his interview with ESPN by complimenting the Syrian president.

“We know our president is the right man,” he said. “A very, very great man. Without our president, Syria is destroyed.”

Syrian Football Association Vice President Fadi Dabbas said to ESPN that the team’s “primary goal” is “to bring all Syrians together” and show the world that “Syria is fine, that Syria has a pulse.”

Dabbas said that Assad watches every game the team plays and follows “the most minute details of the team.” 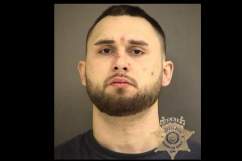 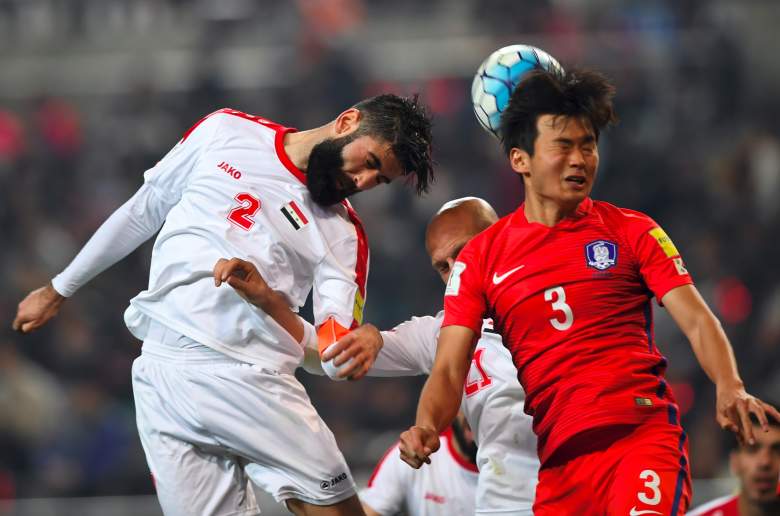 What’s most amazing about the story of the Syrian soccer team is that they are a few victories away from advancing to the 2018 World Cup in Russia. It’d be the first-time ever Syria has advanced to the World Cup, and they’ve done it with virtually no budget.

Due to sanctions placed on the country by the U.S. and the European Union, the team doesn’t have a lot of money to fund its games and practices.

FIFA froze development money intended for Syria because of those. The team cuts costs at any chance, including avoiding stadium fees by practicing at local fields.

Despite that, though, the team has battled and finds itself close to uncharted territory.

Syria suffered a 1-0 defeat at the hands of South Korea on March 28, leaving them four points back of the third-place finish needed to advance in qualifying with just three matches remaining, but still have an outside shot of qualifying. It was a tough loss, especially coming off of a 1-0 victory against Uzbekistan to give them a chance to advance to the playoff stage.

As it currently sits, Syria is in fourth place in its group with the top-two teams qualifying for the 2018 World Cup in Russia. Iran (17 points) is on top of the group with South Korea (13) in second. Uzbekistan (12) is in third, and the Syrians are in fourth (8). China sits behind with five points and Qatar is in last with four.

The third-place finisher in the group must win two playoff games to qualify for the World Cup.

Syria advanced out of the second round of qualifying by taking second place in its group behind first-place Japan. It’s as close as Syria has been to making the World Cup in 31 years.

3. Many Soccer Players In Syria Have Been Killed 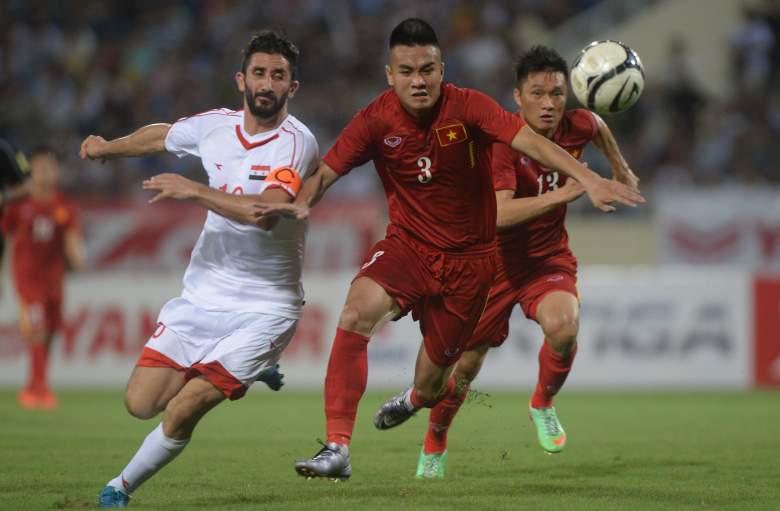 The ESPN investigative piece told the story about how some players on the team feel intimidated by the stranglehold the Assad-led government has on it.

According to information by former sports writer Anas Ammo, who wrote in Aleppo and tracked human-rights abuses in Syria, the government has been responsible for widespread killings of its own players.

Ammo said there have been at least 38 deaths to Syrian soccer players that can be directly attributed to the regime in the country’s first and second division. Thirteen players are still missing.

One former Syrian player, Jaber al-Kurdi, said that he was detained by the regime in 2013 and was tortured for months. He was held for nine months without a trial and guards “repeatedly beat the soles of his feet with a rubber hose and shocked him through electric wires attached to his skull.”

Kurdi, who’s now fled to Germany, said that he had to be treated for recurring nightmares because of the actions.

Another former player, Jihad Qassab, was a star on the professional soccer team that plays in Homs. He was arrested in August 2014 for an undisclosed reason, and he hasn’t been seen or heard from since.

In September 2016, it was reported that Qassab was dead after being “barbarically tortured,” but no other details were provided. His body was never discovered and some of his friends reportedly still think he may be alive.

In an eye-opening interview with ESPN, former player and friend of Qassab Mohamed Hameed said that the former player would have been celebrated in virtually any other country. But not Syria.

If Jihad lived in another country, he would have been honored and rewarded for his long history of achievements in sports.

In Syria, under Assad, he gets detained and tortured. 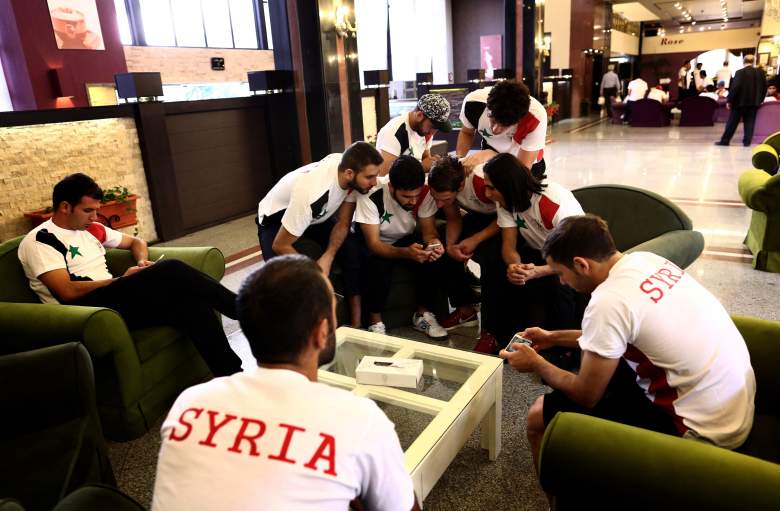 Players from the Syrian national football team check their cell phones in the lobby of a hotel before a 2018 World Cup qualifying match on June 11, 2015. (Getty)

Part of the reason some players are terrified to leave the team and flee the country for good is because of fear they —
or their families — will be harmed and/or jailed if they do so.

Ammo told ESPN that some players on the national team have had their family members arrested or killed by Assad’s regime.

“They are basically forced to play, otherwise they may kill their relatives,” he said.

Another reason is because the Syrian government controls every player on the team’s travel documents, meaning fleeing the team and the country isn’t much of an option. Ammo said that he believed if players on the roster had access to their passports, they would defect and flee the country as refugees. 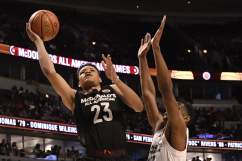 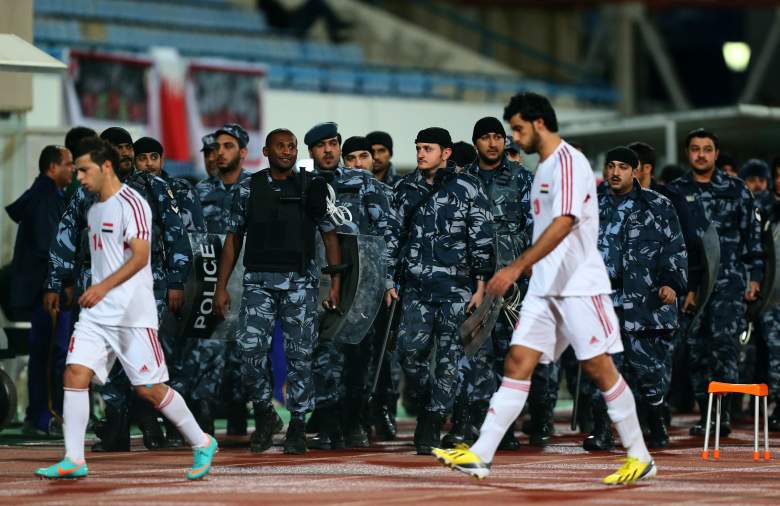 Syrian football players walk in front of Kuwaiti riot police as they arrive at the pitch after several Syrian nationals and opponents to Syria’s President Bashar al-Assad, tried to enter the pitch waving an old national flag in 2012. (Getty)

The men’s team often struggles to find a place to play its home matches. Because of the ongoing civil war in the country, FIFA hasn’t allowed it to host international home games, forcing it to look elsewhere for a venue.

Their stadium in Syria is used to store military equipment and train forces.

Firas al-Ali told ESPN of a time shortly after the civil war started when he arrived at the practice stadium only to find it being used by the Syrian military. He said he got to the stadium in Damascus and the team had half of the stadium to practice on while the army had the other half.

“There was artillery in places meant for athletes,” he said. “They would go out to suppress the demonstrations from the stadium that I was practicing in. I’d hear gunfire from inside the stadium. And the demonstrators still didn’t have weapons. The only ones who carried weapons at that time were the regime.”

After getting out of the second round of World Cup qualifying, the country couldn’t find a proper place to play in the Middle East. It finally found a suitor in Macau in China, but the city backed out just days before its game. Instead of hosting its game in Macau, Syria played the game in Seremban, a Malaysian industrial town.

Finally, Syria had a place to play its home games: Malaysia.

“We heard that our home was going to be Qatar, then Lebanon or Macau,” team captain Abdulrazak al-Hussein said to ESPN. “I don’t know what happened exactly. There shouldn’t be all these rejections and non-acceptances.”

Read More
Soccer, Syria
The Syrian soccer team is close to making history by qualifying for the 2018 World Cup. But it comes at a time of intense civil war and unrest in the country.