.@WWE How are you going to let this comment by JBL about @iLikeSamiZayn slide and completely ignore it? It's really disgusting. #FireJBL pic.twitter.com/3lYX2P0qZF

On the WWE Network’s Bring it to the Table this week, SmackDown Live commentator John “Bradshaw” Layfield invoked ISIS when talking about one of the company’s Muslim employees, Sami Zayn.

During the course of the talk show, which airs on the WWE Network, Layfield talked about the fact that he dislikes Sami Zayn, a professional wrestler who is Muslim and is of Syrian descent.

“I would rather be captured by ISIS than have to have dinner with Sami Zayn,” Layfield said.

This is another example of Layfield making inflammatory statements on WWE programming in order to target a specific coworker. A few weeks ago, Layfield went on an extended rant against fellow SmackDown Live commentator Mauro Ranallo on Bring it to the Table, and this reportedly was one of the reasons why Ranallo ended up leaving the WWE. There has not been confirmation of this, as Ranallo signed a non-disclosure agreement.

This all lead to many WWE fans calling for JBL to be fired. But the WWE never took any action against Layfield, and he has remained a major part of SmackDown Live over the past few weeks; in fact, he recently co-hosted Talking Smack with Renee Young.

At the start of this episode of Bring it to the Table, the controversy surrounding Layfield was addressed; Peter Rosenberg and Corey Graves opened by saying that they have been criticized for certain comments of theirs, and when they turned to Layfield, there was a lengthy silence. 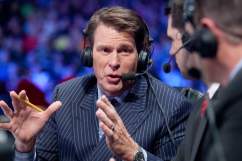