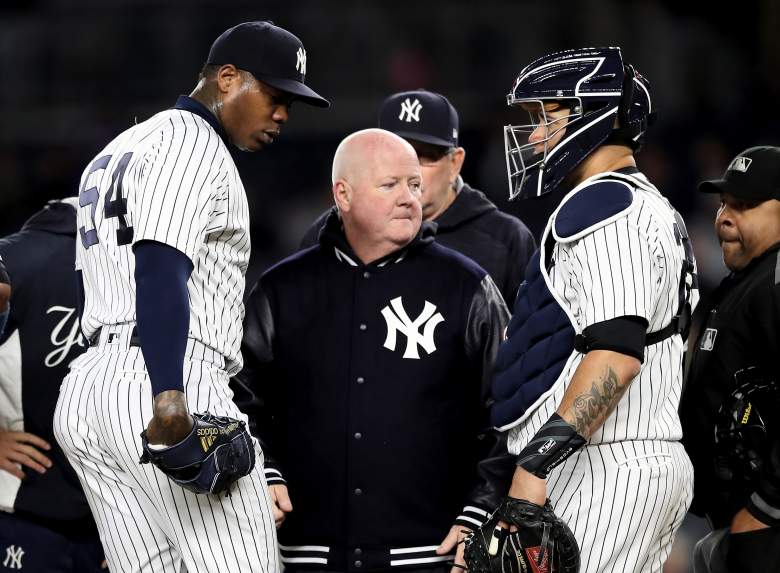 While this Sunday is universally considered “Derek Jeter Day” in the Bronx, not all is well on the New York Yankees front today.

The team announced that star closer Aroldis Chapman has been placed on the 10-day disabled list with left shoulder rotator cuff inflammation.

He will be shut down for two weeks and could miss a month, according to general manager Brian Cashman.

ESPN’s Marly Rivera reports that Chapman did undergo an MRI on his left shoulder on Saturday, which revealed no structural damage.

Aroldis Chapman: "I'm not worried about it. I believe with the treatment I'm going to get in the coming weeks, I should be fine."

Chapman last pitched on Friday against the Houston Astros, going 0.2 IP and giving up three hits and one run. The Cuban reliever threw 24 pitches, 16 for strikes.

At one point during his appearance on Friday, Chapman was visited on the mound by the training staff after showing some visible discomfort. It’s unclear, though, if that is when he suffered the injury.

Girardi also said Chapman says he was fine, though the bench saw the same apparent discomfort shown on tv.

Chapman also struggled against the Chicago Cubs last Sunday — blowing a three-run lead in the bottom of the ninth inning, giving up three hits and issuing two walks.

After winning a World Series in 2016 with the Cubs, the Yankees signed Chapman as a free agent, handing him a five-year, $86 million deal — the largest ever for a relief pitcher.

The Yankees originally acquired Chapman in December 2015 from the Cincinnati Reds in exchange for four minor leaguers.

Chapman was suspended for 30 games at the start of the 2016 campaign for violating the league’s domestic violence policy, stemming from a January incident in which he allegedly choked his girlfriend. 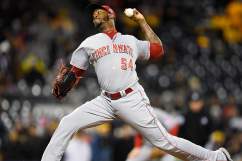 He was traded to Chicago from New York near the trade deadline in 2016 for top prospect Gleyber Torres, reliever Adam Warren, and two lower level minor leaguers.