Brock Lesnar, the WWE Universal Champion who is known as The Beast Incarnate, will be making his return to the WWE on June 12th. This comes after a two month absence, as Lesnar has not been seen since shortly after winning his title at WrestleMania in April.

Lesnar first signed with the WWE in 2000, back when the company was still the WWF. Since then. he has held the WWE Championship four times, and he is currently the fourth Universal Champion ever.

Although he might be a Beast, Brock Lesnar comes from a fairly humble upbringing, being raised on a farm in South Dakota. Here’s what you need to know about the family of Brock Lesnar.

1. His Mother is Stephanie Lesnar 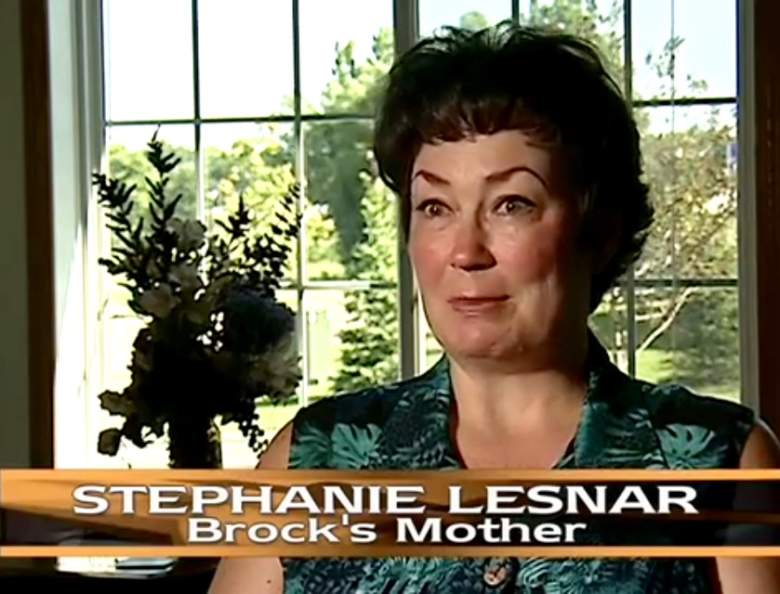 Brock Lesnar was born in Webster, South Dakota in 1977 to Stephanie and Richard Lesnar. In the 2003 documentary Brock Lesnar: Here Comes the Pain, Stephanie Lesnar shows a picture of herself with a baby Brock, revealing that he was born weighing 9.9 lbs. 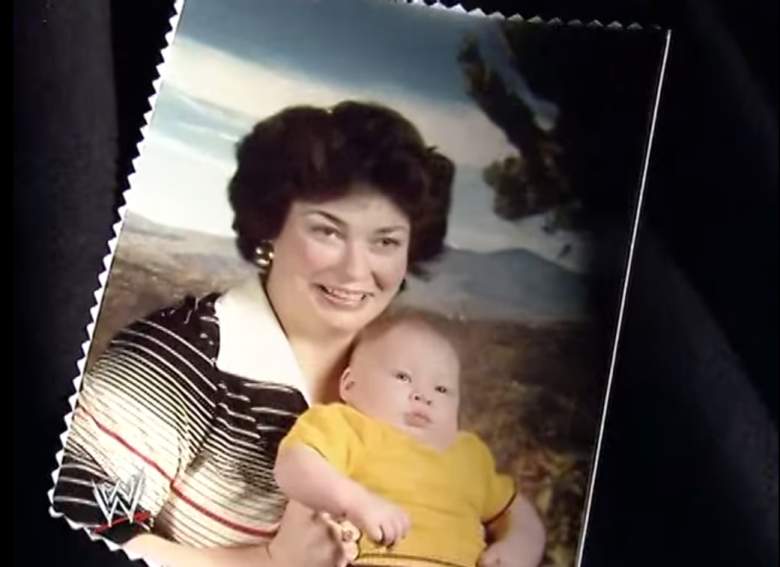 Stephanie also describes Brock as “robust, on the go, inquisitive.”

In the book Death Clutch: My Story of Determination, Domination, and Survival, Brock Lesnar says that while his mother was always supportive, she never heaped praise onto him, wanting him to always push himself harder.

“My mom didn’t accept any excuses,” Brock Lesnar writes. “If I lost, it was my fault. Period…My mom was pretty stiff, but it turned out to be the best thing for me. It may seem coldhearted, but she loved me enough to make me want to go out there and earn victories. Just like crying was not acceptable if I lost, there was no big celebration if I won. Instead, my mom would just say, ‘Good job, Brock, now let’s get in the car and go home. You won. That’s what you’re supposed to do.'”

Brock Lesnar goes on to say that he will never forget how upset his mother was when he lost in the quarter finals of the National Junior College Wrestling Tournament.

“She knew I had been blessed with certain gifts as an athlete, and that I had the ability to push myself harder than anyone else; so why wasn’t I number one?” Lesnar writes. “In her mind, there was no reason I shouldn’t be the best, and she wasn’t ever going to let me think second place was ‘okay.'”

2. His Father is Richard Lesnar 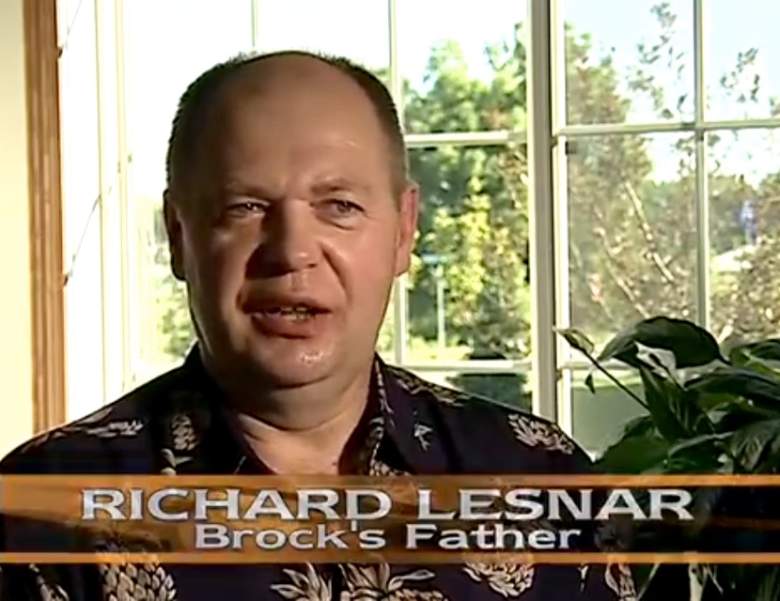 For being the father of The Beast Incarnate, Richard Lesnar seems like fairly normal guy, at least based on the documentary Brock Lesnar: Here Comes the Pain.

It seems that Richard is very emotionally invested in his son’s career, and in the documentary, he describes the experience of watching Brock face Wes Hand in college. This match ultimately ended with Brock winning and becoming 2000 National Collegiate Athletic Association Division I Heavyweight Wrestling Championship..

“I’ll tell you, that championship match was probably harder on his mother and I,” Richard Lesnar said. “My wife says, ‘You’re going to go into cardiac arrest or something.’ I was all white, yelling, screaming.”

In the book Death Clutch: My Story of Determination, Domination, and Survival, Brock Lesnar says that his father was stoic just like his mom was, always pushing him to be better and never heaping him with praise.

“My dad was no different,” Lesnar writes. “If I won a trophy, he would say, ‘good job.’ If I lost, he would tell me to try harder and win the next time. That was it. The expectations were clear. Losing was not an option.”

Lesnar also says that his parents were very supportive in terms of getting him into wrestling tournaments and taking him to practices.

3. Brock Grew Up on a Dairy Farm That His Parents Ran 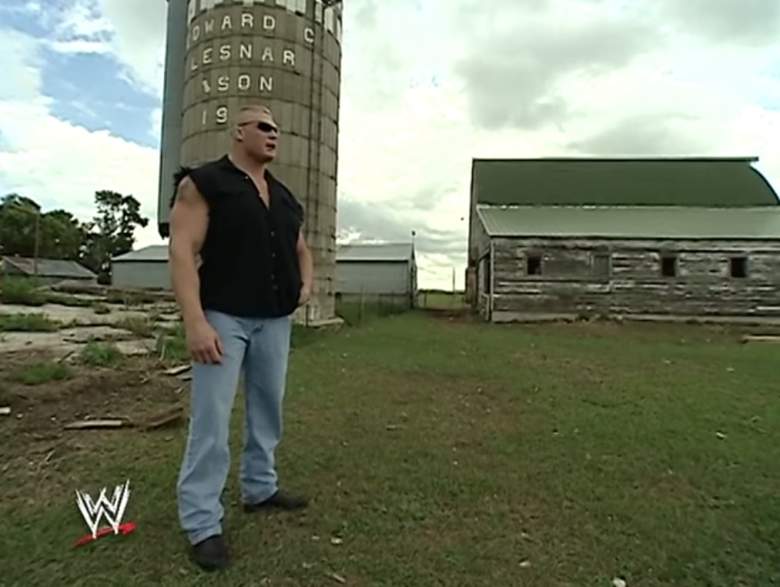 Brock Lesnar returns to the farm where he grew up in the 2003 documentary ‘Brock Lesnar: Here Comes the Pain.’ (WWE)

Brock Lesnar grew up on a dairy farm that his parents ran. In the documentary Brock Lesnar: Here Comes the Pain, Lesnar says that he enjoyed farm life and used to like to sleep in the hayloft.

“Some nights it would just be cool to sleep up in the hayloft,” Brock Lesnar said the documentary. “My hayloft was like my jungle gym.”

Brock Lesnar’s father, Richard Lesnar, says in the documentary that Brock was a very active kid who liked to help out even from a young age.

“Very independent. Very headstrong,” Richard Lesnar said of his son in the documentary. “He liked to be outdoors, even at the age of 4 and 5 he wanted to help out on the farm. He was really a worker.”

In his book Death Clutch: My Story of Determination, Domination, and Survival, Lesnar points to his humble upbringing and says that he had to work for everything he has.

“I didn’t grow up like a lot of people think I did, as a spoiled athlete who got his ass kissed all the way through school, and was catered and coddled,” he writes. “I grew up poor, on a dairy farm in South Dakota, and I had to work for everything I have.”

Lesnar also writes, “I can picture myself in the back of the family station wagon for hours on end, watching the farm fields go by, and wondering where we would end up.”

4. He Has Two Brothers & One Sister 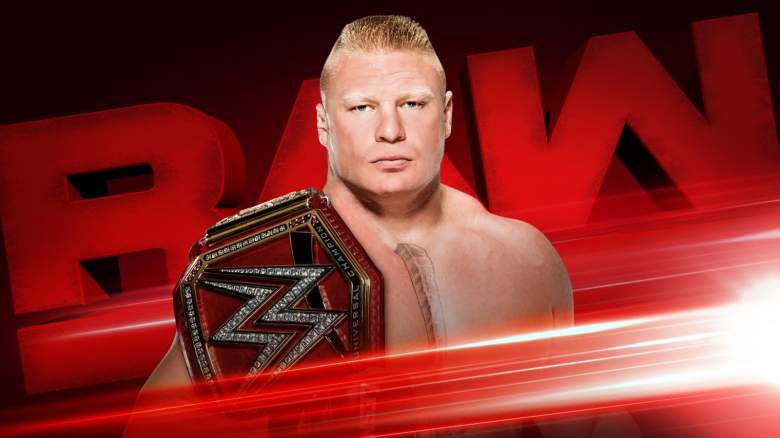 Brock Lesnar was not an only child; rather, he has two older brothers, Troy and Chad Lesnar, and one younger sister, Brandy Nichol Lesnar.

According to the book Death Clutch: My Story of Determination, Domination, and Survival, Troy and Chad Lesnar were also interested in athletics when they were younger, but they did not pursue it professionally like Brock did.

“My two older brothers, Troy and Chad, were standout athletes in their own right, but chose not to pursue sports as a career,” Lesnar writes. “Over time, they became known as Brock’s brothers.”

He says that his sister was also a gifted athlete, but it was hard for her to define herself as anything other than Brock Lesnar’s sister.

“My poor little sister, Brandy, was a very good athlete too, and she excelled at basketball, volleyball, track, and any other sport she decided to play,” Lesnar writes. “But no matter how well she did, she still had to live in the shadow of her big brother Brock.”

In the book, Lesnar also says that things were usually all about him when he was growing up.

5. He Is Married to Sable & They Have Two Children

Brock Lesnar in 2006 married Rena Marlette Lesnar, who performed in the WWE as Sable. The two began to date around the time that Sable returned to the WWE in 2003; Sable was technically still married to Marc Mero at the time, but things were starting to fall apart between them.

Mero said in an interview with Jim Ross, “We were still married at the time, but we weren’t really seeing….I don’t know, it was falling apart. I remember calling her and her not answering the phone and I got very upset. Here I am, assuming she was seeing another wrestler. I remember thinking ‘when i find out who this guy is, I’m gonna be the tar out of him!’ Well, when I found out it was Brock Lesnar, it gave forgiveness a new meaning.”

These days, Brock Lesnar has returned to the farm life that he grew up around, having recently moved onto a farm in Canada with his family, according to the USA Today.