After being traded to the Houston Rockets from the Los Angeles Clippers on Wednesday, point guard Chris Paul took to Twitter to express his gratitude to the Clippers fan base, as well as the “Clipper Nation”, for their support over the last six seasons. 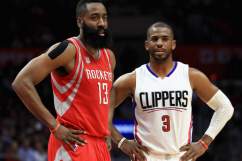 “Unbelievable amount of emotions right now — I don’t even know what to say. Lots of love and tears,” Paul wrote. “I’m so blessed and thankful for the ability to play this game, this is the part no one can prepare you for.”

“To the Los Angeles community and to CLIPPER NATION I say thank you!!!! For the past 6 years you all have welcomed not only me but my family. We love all of you.”

“Most importantly, I’m thinking about the kids at LA’s Best and the Brotherhood Crusade. You guys have changed my life. Doesn’t matter where I go to work — we have a lot more to do.”

Paul opted in to the final year of his $24.2 million contract, according to The Vertical’s Adrian Wojnarowski, which allowed the Clippers to trade him to Houston prior to the start of free agency on July 1.

In return for Paul, the Rockets will send over guards Patrick Beverly and Lou Williams, forwards Sam Dekker and Montrezl Harrell, the non-guaranteed contracts of DeAndre Liggins, Darrun Hilliard and Kyle Wiltjer, along with a 2018 first round draft pick — top three protected.

With Paul opting in to his current deal, he is now eligible to sign a five-year, $205 max deal with the Rockets. Had he opted out and waited until free agency, Paul would only be able to sign a deal starting at $34 million per year.

Opting in also afforded the Clippers the opportunity to get something in return for the nine-time All Star rather than losing him in free agency for nothing.

After dealing Paul, Los Angeles will now turn their attention toward keeping forward Blake Griffin, per ESPN’s Ramona Shelburne. Griffin opted out his contract last week and will become an unrestricted free agent.

Paul averaged 18.8 ppg, 9.8 apg and 2.2 steals per game during his six-year tenure with the Clippers. Los Angeles made the playoffs every season with Paul but never advanced past the second round. Prior to Paul joining the Clippers in 2011, Los Angeles had not qualified for the postseason since 2006. 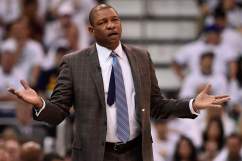 Clippers Roster 2017-18: What Life After Chris Paul Looks Like

Read More
Basketball, NBA
Chris Paul took to Twitter to thank the fans and Clippers nation following his trade to the Houston Rockets on Wednesday.