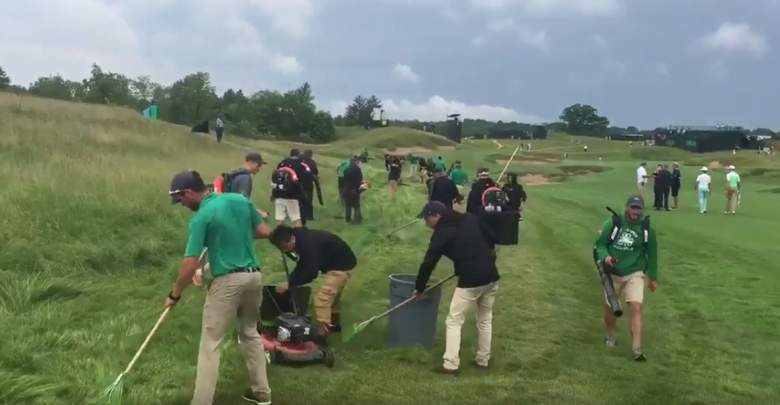 It’s known as one of the staple professional golf tournaments of the year, and it’s the only major hosted by the USGA all season long.

This year’s US Open comes to Erin Hills Golf Course in Wisconsin for the first time ever. And with two practice rounds already in the books, some golfers in the field already have major complaints about one of the things that makes the links course so unique: The long fescue grass that lines much of the fairways on virtually all 18 holes.

Multiple golfers taking part in the annual tournament complained about how long and difficult the rough was to play on, but course architects have argued that the rough is what makes the course so daunting.

Check below for what the fescue looked like at most holes on the course at Erin HIlls.

The Erin Hills fescue: Just how difficult will it be? @Sean_Zak investigates – https://t.co/tKg3x9QBkv #USOpen pic.twitter.com/cXR2rQP6mX

Definitely quite the hazard for a ball that lands outside of the fairway. But it was meant to be that way.

The grass had been carefully managed by staff at the course for years since it was selected as a site, and it was widely anticipated to present quite the challenge to golfers who have poor shots.

One of the more notable golfers that wasn’t thrilled with the condition of the rough was Kevin Na, who posted a video to his Instagram account claiming that the fescue at Erin Hills is “almost unplayable.” He added that only straight hitters in the field will have a chance to compete for the trophy.

Erin Hills is a great design course but the fescue is almost unplayable. BTW never found the ball. So don't hit it in there lol. straight hitters have a chance! #usopen #erinhills #mikedavis #lostball #usga

Understandably so, the architecture firm that designed Erin Hills fired back with a tweet that was critical of Na, encouraging him not to hit him into the rough if he wants to be a contender.

But the USGA listened to those complaints and decided to make an effort to shorten the long fescue on the course. The organization claimed that heavy rains throughout the past week matted the grass down in certain areas, and crews were instructed to significantly trim the grass with weed-whackers and lawn mowers in some areas Tuesday.

The crew is mowing down areas of fescue roughs that were knocked down by heavy rains. "It would be unplayable," @USGA's Darin Brevard said pic.twitter.com/5TtEQOaM5e

They've listened to the complaints and chopping down the rough on the 4th. Make room in the compost bin #USOpen pic.twitter.com/XLwPaNsifp

The decision to cut back on the length of the fescue at certain spots on some holes didn’t sit well with Rory McIlroy, who voiced his displeasure with the grass trim at a press briefing after Tuesday’s practice round. He said that the fairways at Erin Hills are much, much larger than other stops on the PGA Tour, so the difficulty level of the fescue goes a long way at punishing poor shots.

“We have 60 yards from left line to right line,” McIlroy said. “You’ve got 156 of the best players in the world here, if we can’t hit it within that avenue, you might as well pack your bags and go home. These are the widest fairways we’ve ever played in a US Open.”

"You might as well pack your bags and go home" – McIlroy not happy with the decision to cut the fescue at Erin Hills #Usopen2017 pic.twitter.com/W32414b2aE

The long fescue is such a staple at Erin Hills that it has its own parody Twitter account, which is more active now, with the recent developments, as it’s ever been.

In 2014, Erin Hills Superintendent Zach Reineking wrote an article talking about how to “tame the tall fescue” at the course. He said the course possesses “145 acres of unmowed fine fescue” that give it its “signature look.”

It wasn’t long ago that many golfers had similar complaints with a US Open course.

In 2015, golfers at the Open at Chambers Bay Golf Course in University Place, Washington, weren’t shy about making it known how much they didn’t enjoy the tough course.

Organizers from the USGA have long said that they seek some of the most challenging courses in the United States to play host for the US Open because of the “major” status it has.

Expect to hear similar complaints from golfers all week long at Erin Hills, which stretches a massive 7,741 yards.