After a fun week of golf at the Travelers Championship that was complete with Justin Thomas imploding in the opening two rounds of action, it’s time to regroup and look ahead to the Quicken Loans National event. There’s plenty of value this week and one or two studs, including Rickie Fowler, who may wind up breaking the bank for your FanDuel lineups.

The question is, should you pay up for Fowler, or try to go for a more balanced approach? Interestingly, the event this year will be played at TPC Potomac, but it had been held at the Congressional Country Club for the previous few years.

So, let’s jump into the FanDuel optimal lineup for the Quicken Loans National event.

Now, for Brendan Steele, who hasn’t missed a cut this season, there’s just too much to like about what he’s doing currently. The guy has a T13 at the U.S. Open and T14 at the Travelers Championship over his past two events. He’s playing excellent golf currently and this is another course that fits his game well. Expect him to push his way up into a top-10 finish here and possibly even go top-five when all is said and done.

Bill Haas is probably my favorite play on the slate and his price of $8,400 is too low. He hits a ton of greens and against a fairly weak field like this one, he’s going to be in contention to actually win the whole thing. For good measure, Haas finished third in this event with a score of 13-under last year, and fourth the year before. While they are two different courses, they still have similar qualities and that should benefit Haas.

On the season, Kevin Chappell has 14 made cuts out of 18 events with three top-10s and a victory at the Valero Texas Open. After a stretch during the middle of the season in which he was a bit all over and couldn’t seem to finish higher than 40th in an event, he broke out with a T7 at the Masters and then his lone victory. Since that point, he’s the Masters showing, he’s missed just one cut in seven events and has finished 23rd or better four times. His T23 at the U.S. Open and T4 at St. Jude have this arrow pointing upward currently.

As for Danny Lee, I’m just going to go ahead and ride the wave here. After missing the cut at The Players Championship in mid-May, he’s just gone bananas since. In the past five events, Lee has three top-six finishes with a third-place result at the Travelers Championship. His victory is coming, and it wouldn’t be the slightest bit surprising if it was this week.

Adam Hadwin is a cut-making machine, getting through on 17 of 19 events he’s played this season, and picking up a victory at the Valspar Championship. His results from late April on have shown him unable to do much after making the cut, but against a pretty weak field, this could be a prime breakthrough spot for him. Hadwin’s price tag isn’t bad, and for someone who seems almost guaranteed to make the cut, taking a toss-up on what he’ll do after the cut is completely fine in my book here.

Not only is David Lingmerth inexpensive, but he’s playing really excellent golf as of late. He’s tallied top-26 finishes in five of his last six events, as well as three top-18 finishes. Another reason to love Lingmerth is that he actually won at this course when it was a Web.com event. Pairing those two things together makes his low price tag a big head-scratching, but we’re not going to overthink it.

And finally, there’s Grayson Murray, who moved up from the Web.com tour this season. The 23-year-old is a real wild card, but he’s in a prime spot to finally breakthrough after struggling early in the season. After suffering five straight missed cuts, he’s bounced back to make the cut at his last nine events. That run includes a T11 at the Zurich Class, a T18 at St. Jude and T26 last weekend at the Travelers Championship. This looks like a potential breakthrough spot, but even if it’s not, Murray is a safe bet at just $6,200. 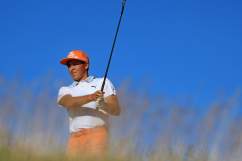