It’s official. Phil Jackson is out as the president of basketball operations for the New York Knicks. Spike Lee is pretty pumped. So is Stephen A. Smith. Michael Rapaport didn’t hold anything back when addressing Jackon’s departure. I think it’s safe to say that every Knicks’ fan there is out there is feeling better about their beloved basketball team this morning.

Yet I think it’s also safe to say that no one is feeling better Kristaps Porzingis.

Now whether or not the split that had been only getting bigger between Jackson and the Knicks’ young star was the true impetus for the dismissal remains largely conjecture. It’s speculation at best right now. Although even Knicks’ owner James Dolan would have to admit that things had gotten pretty much unmanageable as of late. Every franchise has their fair share of disagreements. But a disagreement between a top decision-making executive and a team’s star is a potential deal-breaker.

For the most part, the rift between Jackson and Porzingis officially became a thing at the beginning of April, when Porzingis skipped an exit interview with the team. According to reports at the time, Porzingis bailed on the meeting “due to frustration over what he perceives as the dysfunction and drama surrounding the organization.” It seems as if the young Latvian star had done his homework during his first two seasons in the league and was hip to what needs to happen for a franchise to be successful. Porzingis knows the team is “nowhere near delivering him the platform to develop into the cornerstone of a winning.” To which, every Knicks’ fan nodded in agreement.

Jackson took Porzingis missing the exit interview as a serious slight, saying in an interview that it was the first time in his coaching career that a player had missed one.

Things only escalated as the NBA Draft approached and reports started circulating that the Knicks, specifically Jackson, was actually considering trading Porzingis. Sure, he wanted a lot in return, but just the idea of wanting to trade one of the NBA’s “unicorns” seemed unfathomable. A trade never materialized, but it was apparent that things would be getting worse before they ever got better.

Porzingis stayed out of the trade talk, at least publicly. Who knows what the fine folks of Latvia might know about what their favorite son might really be thinking? Based solely on his Instagram feed, Porzingis has been mostly working out and doing some shoe promotion. The same goes for his Twitter feed.

Yet now that Jackson is gone, one would have to assume Porzingis would be feeling some relief at the very least. Those trade rumors are put to bed and more importantly, the triangle will be put to rest. Jackson is a well-known believer of the offensive system and his insistence that the Knicks run it, live by it, breath it had become a sore spot for those inside the Knicks’ locker room as well as a reason to avoid the Knicks for potential free agents. Despite working wonders for Jackson’s Bulls and Lakers’ teams, there is a general belief that the triangle’s best days are behind it. Jackson remains unrelenting in his allegiance to the system, though. Adrian Wojnarowski of The Vertical reported back in April that Knicks’ players were over the Triangle and dreaded the prospect of another off-season full of triangle-related drills and even worst, lengthly emails from Jackson about the triangle, drilling down on pivot moves, passing techniques and more. No one likes emails from their boss during their vacation; it doesn’t matter who you are. 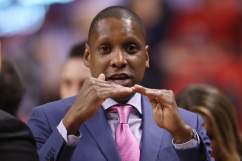 With Jackson gone, the Knicks’ future doesn’t look nearly as bleak as it did a day or so ago. I mean, it doesn’t look fantastic by any means, they still have bad contracts to deal with and a salty Carmelo Anthony to tend to, but it at least doesn’t look hopeless, something you could have said coming out of the draft. Whoever replaces Jackson will have a young stud to build around, the draw of playing in New York City and…uh…well, those are two good things to start with. The rest will figure itself out.

For Porzingis, it’s a new lease on life, a fresh start so to speak. His time with the Knicks has mostly been wonderful, but it couldn’t have been easy playing for a boss who had doubts about you, even as far back as to before he decided to draft you.

Prior to the 2015 draft Jackson had to be talked into drafting Porzingis by Clarence Gaines, a scout for the team. Yet even after picking him, Jackson wasn’t out there giving Porzingis ringing endorsements, comparing him to Shawn Bradley, an incredibly tall, lacky and lackluster big man from the 1990s. It was as if Jackson’s failure to realize what he had in Porzingis was somehow indicative of his inability to see the changing landscape of the NBA. Big men weren’t just centers anymore, setting up shop down on the post to grab rebounds and send the ball out to sharp-shooting guards. There’s a reason why Porzingis has been called a unicorn. He’s something special – a seven footer with guard-like quickness and the ability to knock down three-pointers. Jackson somewhat came around, thanks in large part to a rookie season in which Porzingis averaged 14.3 points and 7.3 rebounds, but it’s now obvious his heart was never in it.

Porzingis’ unique talent and abilities weren’t a good fit for the triangle, something that was noticeable in his second season. Porzingis only averaged 0.8 more shots per 100 possessions in the triangle, despite emerging as one of the team’s biggest scoring threats, if not the biggest scoring threat. Porzingis demands creativity from a coach and a system that evolves and flows with the team’s personnel. It’s fun to imagine what someone like Greg Popovich or Steve Kerr could do with Porzingis.

Knick’s coach Jeff Hornacek is still with the team and unlike Kurt Rambis (an assistant coach) isn’t a Jackson loyalist. It doesn’t seem like he harbors any firm allegiance to the triangle so it could be that the system’s days in New York are like Jackson’s – over. Before he came to New York, Hornacek was a decent coach in Phoenix, going 101-112 in three seasons. He’s still kind of an unknown commodity. Perhaps unshackled from the triangle Hornacek could become the kind of creative coach Porzingis demands?

Or maybe he doesn’t. Maybe the Knicks fire Hornacek too? Maybe the Knicks’ hire a new GM and he actually does pull the trigger on a Porzingis trade or a Carmelo Anthony trade? Or maybe this new GM realizes what they have in Kristaps Porzingis and build a team around, tailored to his unique skillset?

At this point no one (well, besides Wojnarowski probably) knows what the Knicks are going to do. In most cases, uncertainty can be a cause for concern. Yet this isn’t most cases. This is the New York Knicks. Uncertainty might be the best thing that ever happened to them, their young star and their fans.