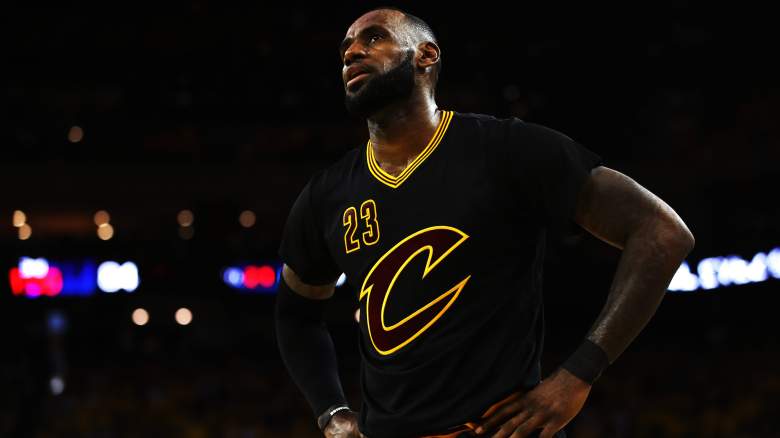 LeBron James was transcendent for most of Game 3 against the Golden State Warriors on Wednesday night, but it wasn’t enough as the Dubs put together a late comeback to secure the 118-113 win and 3-0 series lead.

It was an eventful first quarter for James, who made his first four shot attempts, shook off a big-time collision with Tristan Thompson, and responded with a monstrous throw down to cap off his big quarter:

Kevin Durant making a business decision and decides not to get dunked on by LeBron pic.twitter.com/Gvtc1LNOu4

let's dispel of the fiction that LeBron is allowed to rest, at any point, in this series

LeBron was back in at the start of the second, and you know he’s having a good night when even his passes start going in:

LeBron throws an alley-oop directly in the hoop pic.twitter.com/05fJI5ZyT9

James made his next two shots, a three and a pretty reverse layup to pull the Cavs to within one about midway through the second:

By that point, he was 9-of-10 from the field, which, amazingly enough, wasn’t the first time he’d accomplished that feat in the postseason:

Tonight marks the 3rd time that LeBron has made 9+ of his 1st 10 field goal attempts in a #NBAPlayoffs game. pic.twitter.com/Add8Y9H69B

After playing the entire second quarter, LeBron finished the half with 27 points (11-of-14 FG, 3-of-5 3PT), four rebounds, three assists, one steal and one block in 22 minutes.

LeBron cooled down a bit in the third quarter, but he did pick up four assists in the period, and for the first time all series, the rest of the Cavs helped carry the load. Kyrie Irving was especially big, as Cleveland out-scored Golden State by 11 to carry a five-point lead into the fourth.

Down the stretch, James had a handful of big plays. An offensive rebound and subsequent layup with seven minutes left. A beautiful drive and cross-court pass to JR Smith, who knocked down the three to put Cleveland up six with three minutes to go. Another offensive rebound on the next possession.

But ultimately, it wasn’t enough. After two potential James assists in the final minutes were missed by Kevin Love and Kyle Korver, Kevin Durant hit a couple of huge shots to give Golden State back the lead, and a key strip of James by Andre Iguodala sealed the victory for the Dubs:

This was brazen and playing with a bonfire by Iguodala. Lucky he got away with it pic.twitter.com/X8EQMwZXoQ

You can click here for the full Game 3 box score.