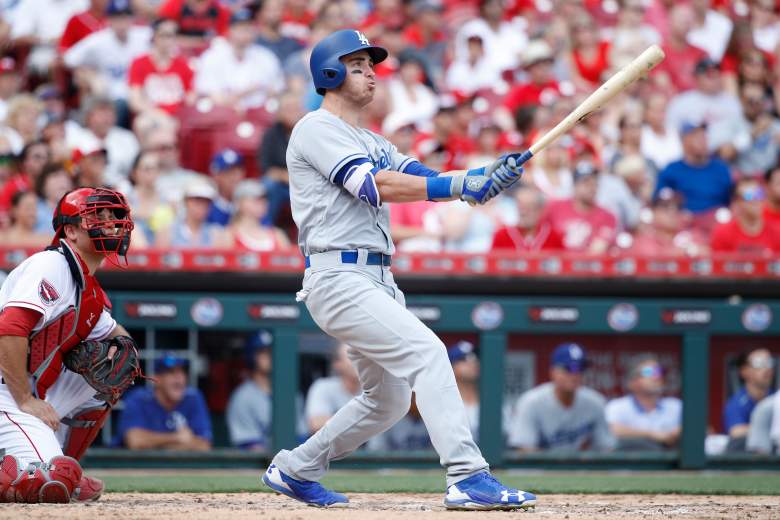 The Los Angeles Dodgers are on a roll, thanks partly to hot-hitting Cody Bellinger (Getty)

The injury-plagued Houston Astros barely hold on to their top spot in this edition of Heavy’s weekly MLB power rankings. They will be getting their two best starting pitchers back this week as they try to hang on to the top spot.

The Los Angeles Dodgers and the Arizona Diamondbacks are this week’s hottest teams and make the biggest jump in the rankings. We say goodbye to the Minnesota Twins and welcome a new team to the power rankings.

*All stats are through June 17. 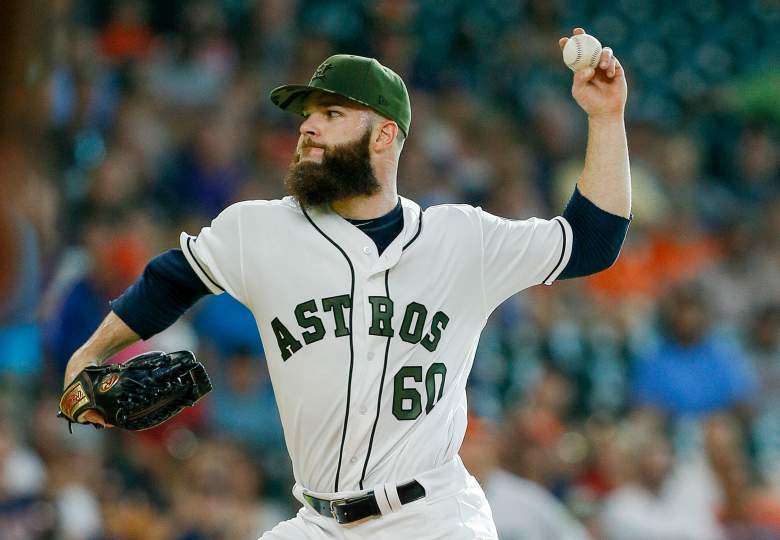 The Houston Astros are getting Dallas Keuchel and Lance McCullers Jr. back this week. (Getty)

Outlook: The Astros were a dismal 2-4 for the week, so how are they still the best team? Well, for starters, they were without their four best pitchers – Dallas Kuechel, Lance McCullers Jr., Charlie Morton, and Collin McHugh. They have only had one start from that group all month, and have still gone 8-7. It is unfair to dethrone them when they are not at full strength. Keuchel is scheduled to return on Wednesday and McCullers Jr. on Saturday. Morton is coming back a week from Sunday.

Their offense seems to be fine, especially after erupting for 13 runs against Texas on Wednesday. Jose Altuve is batting .381 with a .480 OBP in his last seven games. 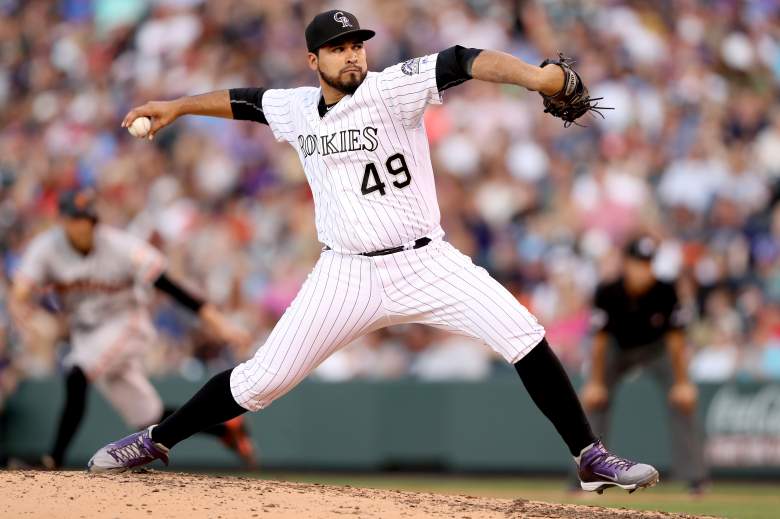 Colorado Rockies rookie Antonio Senzatela is tied for most wins in MLB. (Getty)

Outlook: The Rockies were 4-3 on the week, and were in danger of losing a spot had the Yankees played better, and if one of their losses didn’t come against MLB’s biggest bad ass, Jameson Tailon.

Antonio Senzatela is tied for the N.L. lead in wins, despite a 4.10 ERA. The 22-year-old rookie goes for win number 10 on Thursday against the Arizona Diamondbacks. Greg Holland only picked up one save last week, but still has five more than any closer in MLB. 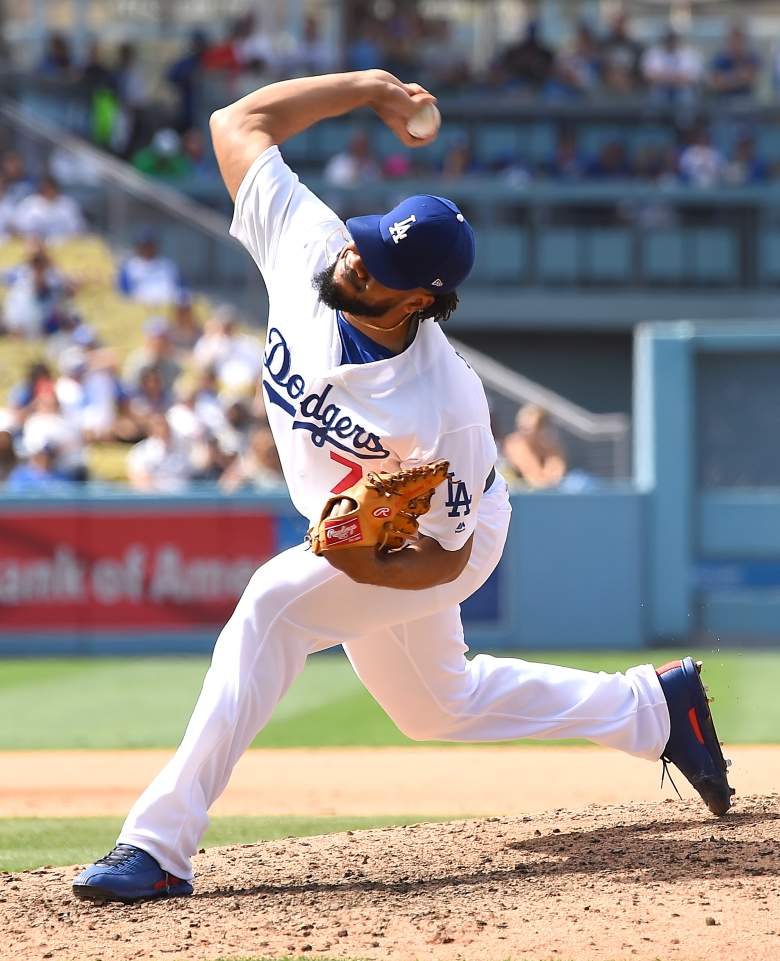 Kenley Jansen picked up 4 saves and a win last week for the Los Angeles Dodgers. (Getty)

Outlook: The Los Angeles Dodgers move up two spots this week, thanks to a 5-1 record. The Dodgers are 8-1 in their last nine games. Kenley Jansen was outstanding, picking up four saves and a win. The Dodgers will get two starts from N.L. ERA-leader Clayton Kershaw this week. Kershaw goes against the Mets on Monday and the Rockies on Saturday.

Cody Bellinger is on fire. The 21-year-old rookie has 6 home runs and 9 RBIs in his last seven games. Bellinger is one home run behind N.L. leader Eric Thames and has a .970 OPS. 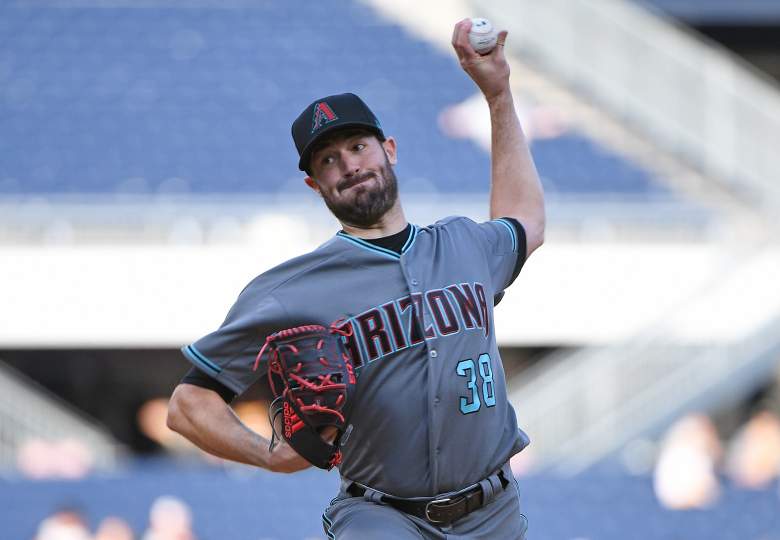 Outlook: The Arizona Diamondbacks move up two spots this week. The team went 5-0 last week and has won six straight. Paul Goldschmidt is batting .400 with 2 home runs, 6 RBIs and a 1.278 OPS in his last seven games. He leads the N.L with 3.5 WAR.

The Diamondbacks got another great start from Robbie Ray last week. Ray pitched 6.2 scoreless innings with 12 strikeouts against the Philles on Saturday. Ray is second in the N.L in strikeouts and third in ERA for the season. He will get the ball twice this week for the Diamondbacks. 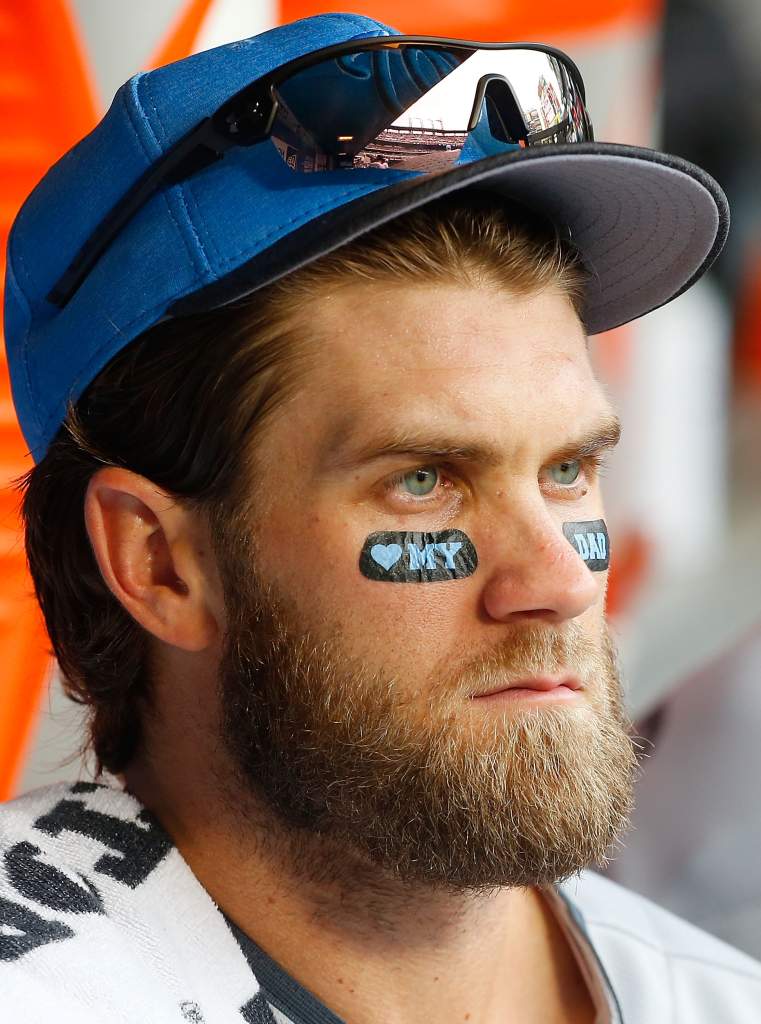 Outook: The Washington Nationals drop a spot this week, but posted a solid 4-3 record. Max Scherzer and Stephen Strasburg both picked up their 8th wins. Scherzer is second in the N.L. in wins and leads the league in innings, strikeouts and WHIP.

Bryce Harper is 3rd in the N.L in WAR, Anthony Rendon is 7th and Ryan Zimmerman is 12th. The Nationals have one game against the Mets, and three games against both the Marlins and Reds coming up this week. 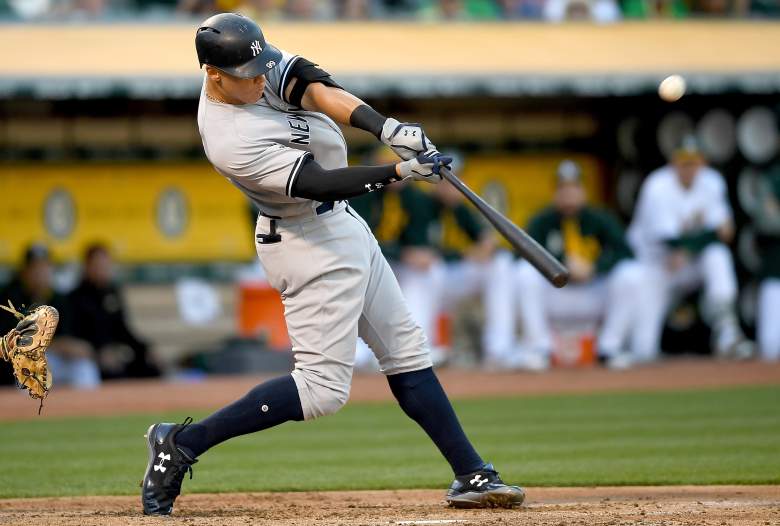 Outlook: The Yankees slip three spots this week due to a 2-5 record. They lost some close games. Three of their losses were by one run and they lost another by two runs.

The Yankees’ struggles can’t be blamed on Aaron Judge, who continues to demolish baseballs. Judge is batting .357 with 4 homeruns, 8 RBIs and a 1.379 OPS in his last seven games. Judge has three more home runs that any player in MLB. 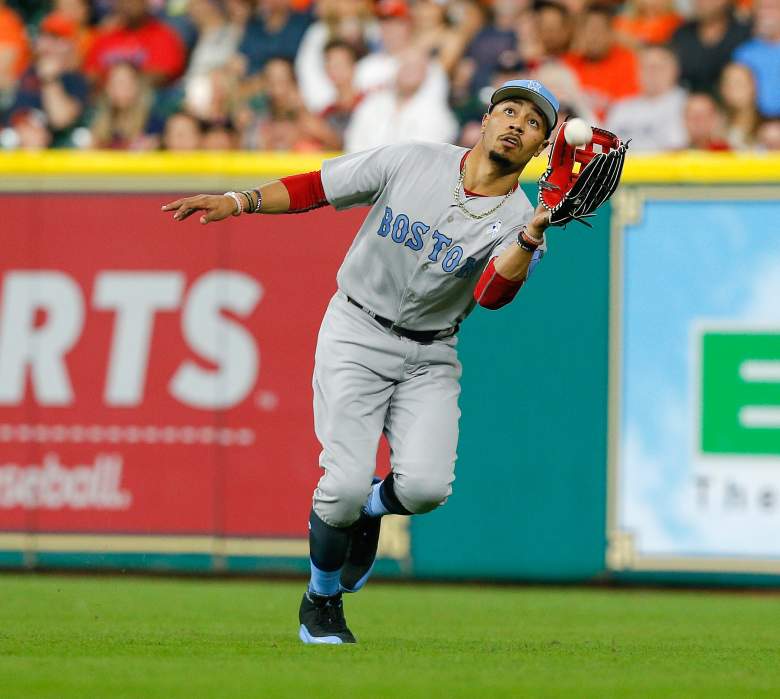 Mookie Betts does it all for the Boston Red Sox. (Getty)

Outlook: The Sox posted a 4-3 record on the week and stay put at number 7 on the rankings. Chris Sale was a hard-luck loser on Saturday. Sale pitched 8 innings with 1 earned run and 10 strike outs. He is first in the A.L. in innings and strikeouts.

Mookie Betts is batting .419 with 3 home runs and 5 RBIs in his last seven games. He ranks third in MLB with 3.5 WAR. The Sox will get two starts from David Price this week and one from Sale. 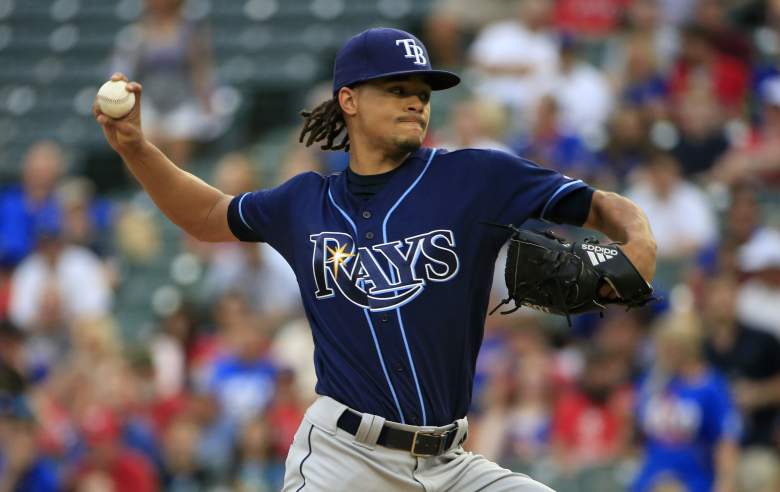 Chris Archer has been a workhorse for the Tampa Bay Rays. (Getty)

Outlook: The Tampa Bay Rays continue to hang around in a difficult A.L East, although they will have to do better than last week’s 3-3 record in order to keep pace.

Chris Archer has won his last two starts. He is second in the A.L. in innings and strikeouts. The Rays play six of their next seven games at home. 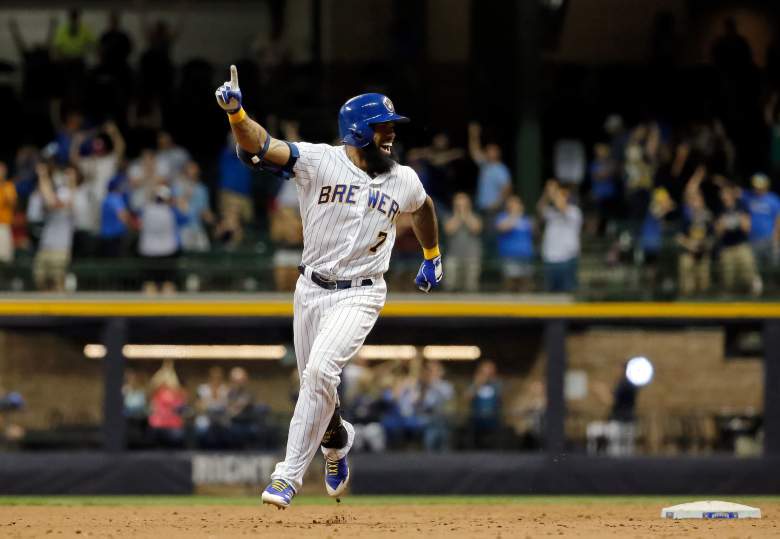 Outlook: The Milwaukee Brewers posted a 4-3 record last week and continue to be the surprising leaders of the N.L. Central. They even managed to take three of four against their long-time nemesis, the St. Louis Cardinals. Reliever Jared Hughes notched two wins on the week.

Eric Thames had a monster week batting .320 with 4 home runs and 8 RBIs. Thames is leading the N.L in home runs and had a walk-off home run on Friday. 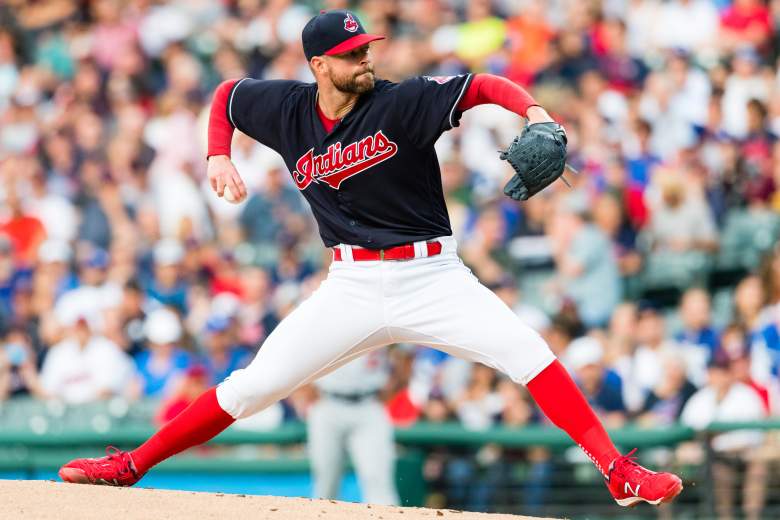 Corety Kluber has been excellent for the Indians since returning from the D.L. (Getty)

Outlook: The Cleveland Indians join the rankings this week, thanks to a 4-2 record. The Indians have won three-in-a-row against the Minnesota Twins to move into a tie for first place in the A.L. Central.

The Indians are happy to have Corey Kluber back from the D.L. Kluber has a 2.37 ERA with 28 strikeouts in 19 innings since his return. He will get the ball twice this week.