For the first time since 1994, neither Phil Mickelson nor Tiger Woods will compete at the U.S. Open. Their reasons couldn’t be more different. While Tiger continues to battle personal demons, Phil has made his decision as a proud family man. The 2010 Masters winner officially announced on June 15 that he was withdrawing from the U.S. Open so that he can attend his daughter’s high school graduation in Carlsbad, California. In the fall, Amanda Mickelson will attend Brown University. Amanda is the eldest daughter of Phil and his wife, Amy. The couple has another daughter, Sophia, and a son, Evan.

The Pacific Ridge School issued a statement saying that they wouldn’t be changing their ceremony to suit Phil’s U.S. Open commitments. While Phil himself told the New York Times, “There’s just really no way to make it, no matter what the tee time is.” Phil will be replaced in the tournament by Roberto Diaz.

1. In 2013, Mickelson Flew to California From Pennsylvania for Amanda’s Middle School Graduation

This isn’t the first time that Amanda’s academic career as impacted Phil’s U.S. Open campaigns. In 2013, Golf Week reported that Phil flew from Pennsylvania, where the Open was taking place, to California the day before the tournament started for Amanda’s middle school graduation. He then flew back to the course for tee time.

The Golf Week article quotes Phil as talking about his daughter’s graduation saying, “[Amanda] did a great job [with her speech]. I am so proud of her. She even quoted Ron Burgundy.” Phil finished as runner up in the tournament to Justin Rose.

Amanda will speak at her high school graduation. Phil told the media about his 2017 decision, “As you get older and you share these moments, you realize the greatest moments in life are those spontaneous moments with your family. And this is one of those moments that I’ll cherish forever.”

In 2016, Phil told Golf Week, “When I get [Amanda] one-on-one, she’s impressive. I learn from her. I could go on and on about her.” Phil mentioned in the interview that his daughter went to India at 16 to teach impoverished children in a village that was 10,000 feet above seal level. Phil said of that trip, “I don’t know if I could bear [that trip], to be honest.”

According to a Generation W profile of Amanda, she is “proud to be a woman, a scholar and an activist.” That bio adds:

Without her insatiable curiosity, commitment to building a new, more intersectional feminism, and (futile) attempts to be “hip with the kids,” Amanda would not be Amanda. She dreams of beating the odds as a woman in academia and of living a life defined by questions.

3. Amanda Was the Captain of Her High School Tennis & Lacrosse Teams

Sports were “an integral part of her high school career,” according to a separate Generation W profile. Amanda was the captain of her school’s tennis and lacrosse teams. Amanda was also a star on the school’s basketball team. That piece describes Amanda as an “activist, an academic, and an athlete.”

4. Amanda Was Part of Her Father’s Attempts to Win the U.S. Open in 1999; Even Though She Hadn’t Been Born Yet

Famously in 1999 at Pinehurst, while Phil, then 29 and without a major win, was in pursuit of eventual winner Payne Stewart. Meanwhile his wife, Amy, was due to give birth to the couple’s first child, Amanda, in Arizona. Phil’s caddy was given a beeper and told by Phil to come get him if it goes off, no matter what. Phil even told a reporter that if the beeper goes off, “I’m out of here. No decisions.”

Phil fell short in the Open but Stewart embraced him at the conclusion of the tournament. Stewart told Phil, “You’re going to be a father.” Amanda Mickelson was born a day later. Amy Mickelson told Golf.com about her version of events saying:

Initially we weren’t worried about the U.S. Open because Amanda’s due date was June 30, two weeks later. But the pregnancy became a little complicated. I was on bed rest after five months, and then I started having preterm labor.

Phil said in the same interview that Amanda’s “birth is the most emotional moment of our lives.”

Tragically, in October 1999, Stewart was killed in a plane crash.

Amanda has conducted independent research in Egyptology and philosophy and has worked in a museum’s collections department. She will continue her Egyptology studies at Brown University in the fall. In 2016, Amanda said that she dreams “of studying sociology and social identity in pursuit of a professional career.” On her Facebook page, Amanda writes that she is “Small and probably reading hieroglyphs right now tbh.” 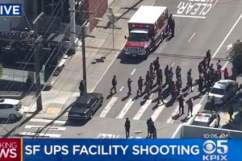 Read More
5 Fast Facts, Breaking News, Celebrities, Golf
For the first time since 1994, neither Phil Mickelson nor Tiger Woods will compete at the U.S. Open. Their reasons couldn't be more different.