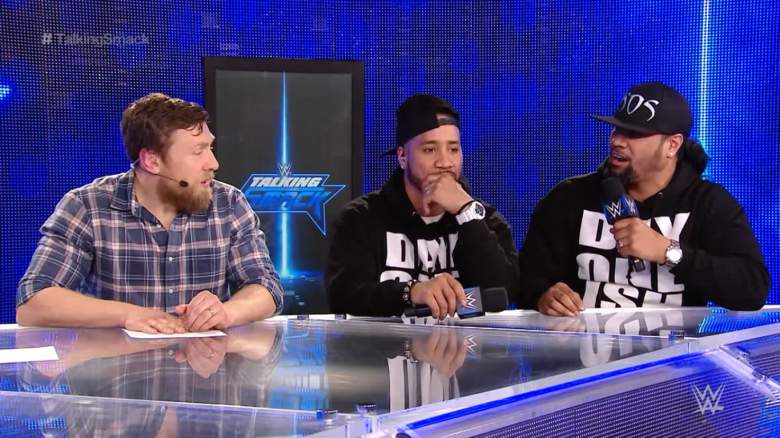 The Usos on ‘Talking Smack.’ (WWE.com)

On SmackDown Live, Jimmy and Jey Uso wear matching sweatshirts that say “Day One Ish,” and every single week without fail, viewers at home take to social media to ask what exactly that means. So what is the meaning of “Day One Ish,” the phrase printed on The Usos’ clothing?

The common interpretation is that the “ish” means what it normally does: it’s a slang term to stand in for “sh-t,” with this having its origins in rap songs being played over the radio and the swear word being replaced with “ish.”

In this case, the word “sh-t” is being used as in “the sh-t,” or the person who is at the top. Presumably, then, The Usos’ sweatshirt is meant to imply that they have been at the top since day one, and so they are the “day one sh-t.”

At least, this is what most fans believe to be the case. The Usos haven’t addressed the issue much, other than once when they were on Talking Smack in February 2017. During this show, when Renee Young brought up their sweatshirts, Jimmy Uso suggested that the phrase really does just mean “sort of day one.”

However, Jimmy Uso immediately said “nah,” and everyone on the Talking Smack panel started laughing, so it’s likely that he was just joking around with that explanation, or he realized he wouldn’t be able to curse on the show and so he made up another origin for the catchphrase off the top of his head.

UPDATE: Since the original publication of this post, The Usos have updated their clothing so that it now says “Down Since Day One Ish” instead of just “Day One Ish.” They also have new lyrics in their theme song which say “We’ve been down since day one ish.” With these updates, it now makes more sense for The Usos to be saying that they’ve been down since almost day one but not quite.