Getty The final table at the 2009 World Series of Poker

The 2017 World Series of Poker Main Event final table begins Thursday night in Las Vegas, Nevada. This year’s Main Event field was the biggest field in nearly a decade and the third-largest in the tournaments history. Day 1C had 4,262 entrants, making it the single largest day turnout in history. The 2017 WSOP Main Event had a field of 7,221 players, but only nine remain.

Here’s how to watch the 2017 WSOP Main Event final table:

The easiest way to watch the final table action is on ESPN. ESPN will be showing all three nights of the final table beginning at 9 p.m. ET Thursday night on ESPN2. Friday and Saturday’s coverage will be on ESPN. The action will also be on ESPN+. WatchESPN and ESPN Play will broadcast the final table via TV network simulcasts.

Here’s how the table stacks up heading into Thursday:

Blumstein and Hesp start off with a huge advantage. Between the two, they have over half the chips in play.

Blumstein is an online poker player from Morristown, New Jersey and is making his WSOP Main Event debut.

“I can’t believe it’s real,” said Blumstein. “I have a great group of guys, and we’re going to get to work and prepare for one of the biggest moments of my life.” 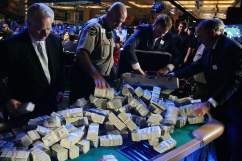