The Boston Celtics have managed to land the most coveted remaining free agent on the market away from the Utah Jazz. While star forward Gordon Hayward had a tough decision on his hands, ESPN’s Chris Haynes was originally reporting that the former Jazz star had chosen to sign with the Celtics.

The real decision, though, came from Hayward later on Tuesday evening when he announced on The Players’ Tribune that he was going to be leaving the Jazz and heading to Boston.

While having to make the tough decision on whether or not to leave the team who drafted him, Sam Amick of USA TODAY Sports reported that Hayward was “genuinely torn” on the decision.

With Hayward now heading to the Celtics, here’s a look at what the team’s updated roster and starting lineup look like, which obviously improves quite a bit with him added into the mix.

Per The Vertical’s Shams Charania, the Celtics have traded Avery Bradley to the Detroit Pistons for Marcus Morris.

It’s hard to argue that with Hayward in the mix the Celtics haven’t immediately closed the gap on LeBron James and the Cleveland Cavaliers. Hayward is fresh off the best season of his career in which he averaged 21.9 points, 5.4 rebounds and 3.5 assists per game. He should step in and add an extra scoring punch to the Celtics offense.

The deal may have been tipped off a bit after Rich Levine reported that Hayward’s trainer opted to follow quite a few of the Celtics players and the team’s official Instagram account as well.

It’s also worth noting that the roster work isn’t done for the Celtics because after signing Hayward, ESPN’s Bobby Marks pointed out that the team needs to create cap space for him. Here’s what he said needs to happen via an article by Haynes:

Boston would now need a series of transactions to create cap space for Gordon Hayward. The Celtics would have to pull the qualifying offer on Kelly Olynyk, renounce free agents Jonas Jerebko, James Young, Gerald Green and waive the contracts of Jordan Mickey and Demetrius Jackson (or trade). The Celtics would be left with $27.6M in room and likely need to move the contract of Terry Rozier or Marcus Smart. Trading Rozier would have the Celtics short $1M of a max salary a lot.

This certainly means that the roster above should look a bit different once the 2017-18 season begins, but the core will look pretty similar. Part of that move to free up space began when the Celtics traded Bradley for Morris. Bradley’s 2017-18 cap hit was $8.808 million, while Morris’ is $5 million.

Hayward would also be teaming back up with his former college coach Brad Stevens, as the two led the Butler Bulldogs to a National Championship appearance back in 2010, but they fell just short against the Duke Blue Devils. It’s hard to envision that this wasn’t a major selling point for Hayward, as he and Stevens seem to still have a strong relationship even after their college days. 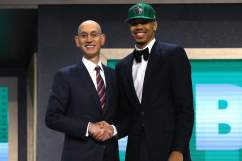