When @espn asked me to be apart of their #BodyIssue, I was honored. When I found out I made the cover, I actually cried. Initially, I was reluctant to make myself so vulnerable by sharing my story and taking the photos. People tell me I'm strong quite often, but really Im strong because of the people around me. This ones for every man, woman, or child facing some sort of adversity. You control your circumstances, they don't control you. Find your passion, and let it consume you. If a little one legged lady can climb rocks and chase mountains, I promise you, you can do whatever it is your heart desires. Thank you to everyone involved! #climbing #climbon #leftlegless On a lighter note, if you don't like butt cracks or tattoos, don't look! ?

Fans looking at the list of athletes included in the 2017 ESPN Body Issue may notice an unfamiliar name: Kirstie Ennis.

But while she may not have the same kind of worldwide name recognition as athletes like Ezekiel Elliott or Isaiah Thomas, Ennis–a former U.S. Marine Corps Sergeant turned amputee snowboarder and rock-climber and marathoner and a whole lot of other things–has a pretty strong claim as the most impressive individual featured in the annual edition of the magazine.

Here’s everything you need to know about her:

1. She Lost Her Left Leg After a Helicopter Crash

I've had some amazing photographs taken of me on this wild ride I'm on. But this one really hits home. You only see three here, but I have more knees and feet than people have shoes. @theveteransproject #veterans #amputee #leftlegless #powerful #iwontstop

The daughter of two Marines, Ennis enlisted out of Florida when she was 17 years old in 2008. She served for six years as a helicopter door gunner and airframes mechanic when disaster struck on June 23, 2012.

While on her second deployment to Afghanistan, Ennis’ helicopter crashed. She suffered a multitude of injuries to her brain, spine, face, shoulders, and in November 2015, doctors had to amputate her leg below the knee. All-in-all, she says she underwent 44 surgeries.

Determined not to be defined by her physical injuries, she has learned the importance of a positive attitude and perseverance.

“One of the things I learned [after the amputation] is that it’s what’s behind your rib cage and the 6 inches between your ears that matters,” she says. “If you have your head and your heart in the right place and go into things laughing and smiling, it’s going to be smooth sailing.”

2. She Became an Above-the-Knee Amputee in December 2015

On this day, a year ago. November 23–You got me good. The 23 is just not a good day for me ? June 23 bird crashed. Nov 23, below the knee. Dec 23, above the knee. F***! #ampuversary #onthisday #leftlegless #backatit #amputee #monoped #OLH ? My friends mainly came to the hospital to harass me ? @designbyxtine

After her below-the-knee amputation on November 23, 2015, Ennis caught MRSA in the hospital and doctors were forced to remove her knee exactly a month later. As she explained, the second amputation was a much larger setback than the first:

I will never complain about being an amputee — I’m alive, happy, healthy — but I would do damn near anything to have my left knee back. A below-the-knee amputation is night and day from above-the-knee. When I went in to the hospital and they said you’re going to be above-the-knee now, I lost it. I snapped. I screamed. I made a fool of myself in the hospital.

But while it was discouraging at first, Ennis hasn’t let it stop her from chasing an incredibly lofty list of goals.

Chief among that list of goals is the 2018 Winter Paralympic Games in Pyeongchang, South Korea, in March. Ennis, who hadn’t snowboarded before her injury, took it up and quickly enjoyed immense success, winning the 2015 USASA National Championship.

As of June 2017, she ranks 12th in the Para Snowboard world rankings.

Amidst high stress levels (thanks alive day and Tims over the hill birthday ?, teasing) with crazy climbing and lots of firsts, it hit me. I am going to hit a world record that means something to ME. I've come in first, I've been the first, but this will be heard around the world and more importantly, be top ranked in my heart. I'm hungry, maybe even foolish for you #Carstenzs, but let's dance ?. #leftlegless #climbing #climbon #mountainsarecalling #mountainbuilt #staywild #findyourpassion #chaseyourdream #committosomething #forceofnature #3weeks @theheroesproject ? @amandapapageorge

In addition to snowboarding and completing marathons and Iron Mans and pretty much any other ridiculous athletic achievement that you can think of, Ennis has her sights on summiting the tallest mountain on each of the seven continents. In March, she became the first above-the-knee amputee to ever top Mount Kilimanjaro, and she has plans for Mount Everest Base Camp in October and the Denali summit in May of 2018.

“It is unheard of for amputees, especially above the knees to want to take on mountains, especially the highest in the world,” she says. “My passion is the outdoors and there is no other feeling like standing on top of a mountain taking in the world around you.”

Perhaps Ennis’ most ambitious goal? Reaching the top of Carstensz Pyramid in Indonesia, a 16,000-foot rock face that has only been attempted by one other above-the-knee amputee, who had to be pulled off after 500 feet.

Remember when Barbie created that cute doll with a little more curves? 5' short little thing packing a bit more in the upper and lower halves? Hi, here I am, an example. Curves and all, one leg. I love this body and the hell I've put it through. Thank God, I have been so blessed. I love imperfection, and I love "imperfect" bodies–they all tell stories. See more in @espn Body Issue. #leftlegless ? @marissa.boucher

As part of a Walking With the Wounded charity event in 2015, Ennis made a 1,000-mile trek across Britain, during which she honored 25 fallen soldiers by laying down a dog tag every 40 miles. She was also joined by Prince Harry during certain segments.

“Prince Harry told me his knee hurt, and I looked over and was like, ‘That’s f—ing cute. Really?'” she recalled. “I used to roll my eyes and be like, ‘You have no idea.’ But now I look at people and I’m happy they’re feeling what they’re feeling because it’s making them tougher. I like seeing people grow, and in order to have growth, you have to be uncomfortable.” 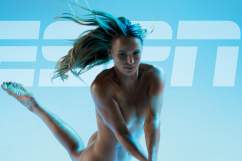