Getty The Rams will take on the Chargers in a preseason L.A. battle.

Football is coming. When the NFL starts depends on how you define the beginning of the season. The Arizona Cardinals and Dallas Cowboys are the two teams with the earliest training camp start dates. Arizona starts on July 21 while Dallas begins a day later on July 22.

The squads kick off the preseason in the Hall of Fame Game on Thursday, August 3. Week 1 of the NFL season does not begin until Thursday, September 7 when the Chiefs take on the Patriots. As the calendar shows, there are a variety of different milestones along the way to get you ready for the season.

With that in mind, Heavy is here to help you look ahead to the preseason. Let’s be honest, preseason football is not always of the highest quality, so it requires a bit of digging to find what you are looking for. Here at Heavy, we have a simple philosophy. Some football is always better than no football.

During preseason, starters get limited reps making it a good time for fans to get familiar with rookies and players on the rise.

Here’s a look at five 2017 NFL preseason games that need to be on your calendar.

GettyThe Chargers and Rams will meet for the first time as Los Angeles teams.

In the span of a year, Los Angeles went from being without an NFL team to having two teams. The Rams opening season in L.A. was far from ideal. With new coach Sean McVay there is a sense of optimism about the Rams.

This is the first meeting between the two Los Angeles teams. Aside from the obvious rivalry factor, fans are curious to see how quarterback Jared Goff performs in his second season. Todd Gurley is also due for a bounce back season.

GettyDeshaun Watson is set to make his NFL debut for the Texans.

Deshaun Watson and Christian McCaffrey were two of the most exciting players in college football. With neither player’s role clearly defined, fans should be able to get a good look at them in this preseason Week 2 matchup. The Panthers also added speedster Curtis Samuel who can play both wide receiver and running back. The Panthers new-look offense is one of the most interesting things to watch during the preseason.

GettyMitchell Trubisky should see a lot of game action in the preseason.

All eyes are on the quarterback position in this matchup. For the Broncos, second-year quarterback Paxton Lynch is looking to prove he can take over the reins from Trevor Siemian. The Bears brought in veteran Mike Glennon then drafted Mitchell Trubisky out of North Carolina. Glennon is expected to start this season, but expect Trubisky to get some good reps during the preseason.

It is not often the Browns make a list for positive reasons, but there it plenty to watch in Cleveland. The Browns selected defensive end Myles Garrett with the number one pick, and rookie DeShone Kizer is fighting for the starting position. The Giants brought in plenty of playmakers on offense to give Eli Manning numerous weapons in his final years. New York drafted one of the best receiving tight ends in Evan Engram. The Giants also brought in veteran wide receiver Brandon Marshall.

GettyEric Decker heads to Nashville to give the Titans a much needed receiving weapon.

Tennessee has beefed up their receiving core with the addition of Eric Decker and drafting Corey Davis. The Chiefs drafted Patrick Mahomes who they hope will be their quarterback of the future. Alex Smith is expected to hang on to the starting job for at least this season. It is hard to predict how the teams will handle playing time given it is the final preseason game, but this could be an entertaining matchup if some of the rookies get to play. 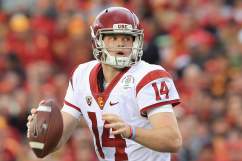