Getty Dak Prescott expects to make his preseason debut tonight against the Colts.

The Dallas Cowboys host the Indianapolis Colts at 7 p.m. Eastern on NFL Network. It will also be broadcast on Fox 59 in the greater Indianapolis area.

Line: Cowboys by 5.5 points (Line is according to OddsShark and subject to change.)

Game Preview: Colts fans are anxiously awaiting the return of Andrew Luck. Scott Tolzien is expected to make the start tonight at quarterback. Reports on Luck’s status have been mixed, and there is a chance Luck will not be ready for the start of the regular season.

While the Cowboys are entering their third preseason game, most of the Cowboys key players have not played. Dak Prescott, Dez Bryant and Jaylon Smith will all make their preseason debut. For Smith, it will be his first NFL game after missing all of last season while recovering from injury.

The focus for Cowboys fans and fantasy football players will be on the Cowboys run game. With Ezekiel Elliott’s suspension, Darren McFadden and Alfred Morris are battling for the starting spot while Zeke is out.

Last week, McFadden received the majority of carries, but did not manage to do much with the opportunity. With tonight being the Cowboys third preseason game, fans can expect the offensive distribution to look similar to a regular season game.

The Colts really looked to bolster their defense through the 2017 NFL Draft. Safety Malik Hooker and Quincy Wilson should strengthen a secondary that has given up big plays in recent years. The Colts also selected pass rusher Tarell Basham in their defensive heavy draft.

Like the Cowboys, fans are watching the running back position with rookie Marlon Mack looking to take carries away from veteran Frank Gore. 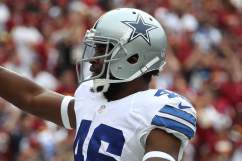 Alfred Morris & Darren McFadden Fantasy: Who Is the Cowboys RB to Own?