Getty Alfred Morris should be the preferred Cowboys running back in Dallas.

With ESPN’s Adam Schefter reporting Ezekiel Elliott will be suspended six games, it adds serious question marks in fantasy to the entire Dallas Cowboys backfield. Here is the good news: multiple Cowboys running backs will be worth owning.

The bad news is knowing which one to own this early in the season will be difficult. If you are drafting in early August, you do not have the luxury of watching the preseason play out.

As things stand now, Morris should get the slight edge. Keep in mind the Cowboys signed Morris prior to drafting Elliott. The team liked him, and would have felt comfortable with Morris as the starting running back if they had decided to draft another player like Joey Bosa over Elliott.

Morris has performed well in limited action with the Cowboys, and will have the luxury of running behind the best offensive line in football.

While Morris should be viewed as the favorite, it is worth monitoring how McFadden performs in preseason. McFadden was able to rush for over 1,000 yards in 2015 behind the Cowboys line. McFadden has been plagued by injury concerns for the majority of his career, and fantasy owners will want to take that into consideration as well.

With the uncertainty in Dallas, fantasy owners should not draft a Cowboys running back before the middle rounds. Continue to monitor how the Cowboys distribute touches in the preseason, but if you are drafting soon Morris should get preference over McFadden.

It is worth noting, McFadden is listed above Morris on the current Cowboys depth chart. Ronnie Hillman was listed as the fourth back when Elliott was the lead back. Elliott did not play in the Hall of Fame game, giving fantasy owners an extremely small sample size to explore.

Morris had seven carries for 42 yards, while McFadden had just three carries for -6 yards. Rod Smith was the biggest beneficiary with 18 carries for 64 yards. While he is still in play to get carries with Elliott out, this performance should not be overvalued as the majority of reps in an NFL team’s first preseason game is given to players lower on the depth chart. 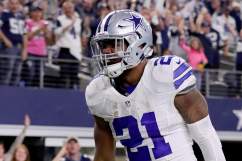 Ezekiel Elliott Fantasy Value: Where to Draft Zeke After Suspension