Getty Heavy gets you ready for the start of the season with the best fantasy team names.

Coming up with a fantasy football team name that feels right can be almost as difficult as drafting your team. We are here to help with the top options for 2017.

There are several different ways to approach your team name. Classic names like Show Me Your TD’s don’t require you to have a certain player on your team. Others like Turn Down for Watt are more dependent on your roster construction, and ensuring that said player is on your team.

As for the actual fantasy football strategy, three of the first five picks are running backs according to the Fantasy Pros data. David Johnson, Le’Veon Bell, Antonio Brown, Julio Jones and LeSean McCoy are the first five players going off the board in fantasy drafts.

Don’t see your favorite fantasy team name? Make sure to leave your top pick in the comments section.

Here’s a look at the top ten fantasy football names for 2017.

GettyEddie Lacy is fighting to be the Seahawks lead running back.

This suggestion from DFSStrategy.com may be the funniest name on the list. A slimmed down Eddie Lacy currently has an ADP of 86.4 which is good value for a team like the Seahawks who want to rely on the run.

This name works more effectively if you are able to draft both Ezekiel Elliott and Carlos Hyde. Elliott is a bit risky with his suspension, while Hyde has been greeted with some skepticism with the 49ers drafting Joe Williams.

If your goal is to use this name, you can likely snag Hyde in the middle of your draft. If you’re only able to get one of the players, you could always alter it to say Hyde & Seek or Hide & Zeke. This name comes courtesy of Reddit user dagnir_glaurunga.

No. 3 Dalvin and the Chipmunks

GettyAlvin and the Chipmunks is a perfect compliment for Dalvin Cook and/or Alvin Kamara owners.

This name offers fantasy owners some flexibility. It is a perfect fit for Dalvin Cook owners, but even works if you snag Alvin Kamara in the later rounds (which is a good play regardless of team names). Your team logo possibilities with this name are endless, including the player heads photoshopped onto a picture like the one above with the actual chipmunks. Thanks to Reddit user GhostofSparkyAndersn for this name.

Yes, smokin’ Jay Cutler is back from a retirement that only lasted the summer. This is a great name, but it does somewhat require the owner to have Jay Cutler on your team. This may not be the most ideal option as Cutler’s 197.4 ADP shows. For teams in two quarterback leagues, Cutler is definitely going to be rostered.

GettyGame of Thrones fans have a few options when it comes to fantasy team names.

Game of Thrones enthusiasts are always looking for a way to incorporate their G.O.T. love into their fantasy team. This one only works if you draft Julio Jones, or if Julio is too rich for your blood, you could always draft Marvin Jones. Reddit user Imurdaddytoo suggested this one. Winter (and Julio) is coming.

No. 6 Russell and Flow

GettyRussell Wilson is hoping to stay healthy in 2017.

This name works great for either the Russell Wilson owner or Seattle Seahawks fan. The name comes courtesy of DFSStrategy.com. Wilson is going as the fifth quarterback off the board. With a suspect offensive line, he took a lot of punishment last season and his fantasy performance suffered as well. Look for a bounce-back season from Wilson.

No. 7 Deshaun of the Dead

GettyDeshaun Watson is likely to start the season as the Texans backup quarterback.

Those wishing to take a late-round flyer on the rookie quarterback have a perfect name courtesy of Athlon Sports. This name is more suitable for dynasty league teams as the Texans have named Tom Savage the starting quarterback. That said, it would not surprise anyone if Deshaun Watson is the starter by the end of the season. Watson has looked good in spots during the preseason, and brings with him an impressive college football pedigree.

GettyDez Bryant owners hope to be throwing up the X a lot this season.

Throw up the X, Dez Bryant owners. According to Fantasy Pros, Bryant has an ADP (average draft position) of 18.8 meaning he is going in the middle of the second round in 12-team leagues. Assuming he stays healthy, Bryant is a good option with Dak Prescott behind center. This name is courtesy of DFSStrategy.com.

GettyKenny Golladay has impressed during the preseason.

Are you feeling sleeper wide receiver Kenny Golladay? This name from Yahoo Sports has you covered. The 6’4″ Lions rookie wide receiver’s performance in the preseason has fantasy owners scrambling to get him in their drafts. Based on the ADP data (186.8), it looks like you have a good chance to select him in the later rounds. It will be important to manage expectation with Golladay as it can take a while for rookie wide receivers to become fully accustomed to the NFL.

GettyIsaiah Crowell is going in the third round in many fantasy drafts.

As a Counting Crows fans, I love this name from DFSStrategy.com. Isaiah Crowell is a name rising up draft boards as he is expected to be the lead back in Cleveland. Crowell’s 29.6 ADP shows he is no longer a sleeper as he is going as early as the third round in some leagues. 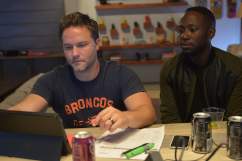