Getty The Detroit Lions have made the "WCF" logo on their jerseys permanent.

This season, the Detroit Lions are once again wearing a “WCF” logo on the left sleeve of their jerseys. The “WCF” is a tribute to the late William Clay Ford, Sr. A grandchild of Henry Ford, William Clay Ford, Sr. died in March 2014 at age 88. Since his death, the Lions have been owned by his widow, Martha Firestone Ford.

The Lions have been honoring William Clay Ford Sr. since the 2014 season. At first, the team wore a patch on the upper right side of the jersey, above the player’s number. The patch was the shape of a football, with “WCF” in front of a black field and blue and silver bars behind the letters.

The team wore the patch again in 2015. After wearing it again for the 2016 season opener, the Lions announced that the “WCF” patch would become a permanent addition to the uniform, reports ESPN. However, the patch was not included on the Lions’ 2016 “Color Rush” jerseys, which they were supposed to wear for their annual Thanksgiving Day game. Since they opted not to wear the “Color Rush” uniform, they didn’t have to worry about playing a game without the “WCF” patch.

GettyThe old “WCF” tribute was a patch on the front of the jersey.

In July 2017, the Lions unveiled a whole new uniform set. To the untrained eye, the uniform doesn’t look all that different from past years, but it does include a new iteration of the “WCF” tribute. “WCF” was moved to the left sleeve and is now a printed part of the jersey, not an add-on patch. The black field – along with all other black accents that used to be a part of the uniform – is gone. The new jerseys also have “LIONS” printed on the right sleeve.

The new uniform set also includes a new “Color Rush” uniform that will make the Lions look like giant silver blobs on the field. The uniforms will be worn for the Saturday, December 16 game against the Chicago Bears, which will air nationally on the NFL Network.

At least it means we’ll never have to see the weird all-black 2016 “Color Rush” uniforms in action. 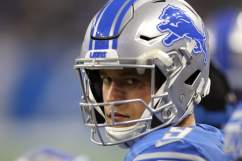 Matthew Stafford’s Net Worth: 5 Fast Facts You Need to Know

Read More
Detroit Lions, NFL
The Detroit Lions wear "WCF" on their jerseys in honor of the late William Clay Ford. Find out the history behind the patch.