Getty Christian McCaffrey is firmly locked in my starting lineup for Week 1.

Congratulations, you made it through the long off-season. Now, comes the fun part of actually participating in fantasy matchups.

What is not as fun is agonizing over who to start, and sit each week in your lineup. One helpful piece of advice I have heard from fantasy analysts over the years is to ask yourself one simple question. What is most likely to happen?

Could DeShone Kizer outscore Aaron Rodgers in Week 1? It’s possible, but not likely. There are going to be outlier performances each week. However, if you take the approach of starting your best players every week, it is going to work in your favor more times than not.

Where you want to consider matchups the most is with players of similar value. You’re unlikely to sit Jordan Howard regardless of who the Bears are playing. Eddie Lacy may be more of a matchup play given you selected him in the middle rounds (though he has a payback game opportunity this week against Green Bay).

As a reminder, make sure to sit all Dolphins and Buccaneers players with the game being postponed.

As always, reach out to me on Twitter @JonDAdams for any questions you have.

Here are the players I am locking in my starting lineup, along with this week’s duds who should stay on your bench.

GettyCarson Palmer is telling you to put him in your Week 1 fantasy lineup.

QB Carson Palmer, Arizona Cardinals: Palmer has a beautiful opening schedule making him the perfect pairing for Andrew Luck owners. Word out of Arizona is Palmer’s arm is fresh, meaning the Cardinals offense should regain the explosive form we are used to seeing. The Lions defense should not scare fantasy owners from starting Palmer on opening week.

RB Christian McCaffrey, Carolina Panthers: McCaffrey is going to become a must-start by mid-season, especially in PPR leagues. McCaffrey is so versatile that fantasy owners can put him in their lineup with ease. ESPN reported McCaffrey has a customized playbook to help the Panthers take advantage of his skill set. The Panthers have a nice opening matchup against the 49ers. McCaffrey may be starting in his first NFL game, but make sure he is in your lineup.

WR DeAndre Hopkins, Houston Texans: Chances are if you spent an early round pick on Hopkins you are starting him. However, there has been some trepidation among fantasy owners after his lackluster 2016 season. Tom Savage and Deshaun Watson may not seem like ideal quarterback options, but either is an improvement from Brock Osweiler. The Texans will look to put up points against a Jaguars team that struggled mightily in the preseason.

TE Zach Ertz, Philadelphia Eagles: The Eagles traded top wideout Jordan Matthews opening the door for Ertz to have an increased role this season. Early reports have Carson Wentz looking Ertz way early and often. Finding a tight end to start Week 1 can be difficult, but Ertz is a safe bet to go with. He has a solid opportunity this week against the Redskins.

For those streaming defenses, the Rams are the one to go with Week 1 against the Colts. Los Angeles already has upside, and have a plus matchup this week against the Colts. Scott Tolzien is starting at quarterback for a recovering Andrew Luck. The Rams have enough talent on the defensive line to force Tolzien into throwing multiple interceptions, making them the start of the week at DST. Los Angeles even has some staying power past this week as a DST option.

GettyPhilip Rivers owners will want to find other options for Week 1.

QB Philip Rivers, San Diego Chargers: Rivers tends to start the season strong, but has a tough Week 1 matchup against the Broncos defense. The Chargers have had a brutal off-season with injuries, and I’m not convinced the Chargers offensive line is going to be any better at protecting Rivers. If you have other quarterback options, I’d go with them this week.

RB Mike Gillislee, New England Patriots: Outside of Brady and Gronk, I’m sitting most Patriots skill position players. Gillislee generated a lot of buzz this offseason for his anticipated role in the offense. The truth is no one has any idea how the Patriots will use their running backs. I’d rather wait a week to see how Gilliselee is used. He also goes against a very good Chiefs defense, which is far from an ideal matchup.

WR Donte Moncrief, Indianapolis Colts: Moncrief has not fared well with Luck out of the lineup. While I like Moncrief overall this season, there are better wide receiver options to go with in your Week 1 lineup. If you drafted T.Y. Hilton, there likely isn’t a good alternative to starting him. However, wherever possible, I am fading Colts wide receivers this week in an already less than ideal matchup with the Rams defense.

WR Kenny Golladay, Detroit Lions: Listen Golladay truthers, he flashed in preseason, but things are much more difficult when the regular season starts. While I think there is a good chance Golladay can become fantasy relevant by season’s end, fantasy owners would be wise to have him on your bench until you see the targets are there. The Cardinals also have one of the best NFL secondaries, which is not good for Lions receivers.

WR Kevin White, Chicago Bears: While I love Kevin White this season, let’s see how the Bears receiving core shakes out before we put him in our lineup. It is not a great matchup against the Falcons secondary, and I am keeping White on my bench. Long term, I think there’s a good chance he becomes Chicago’s WR1, but that will have to wait a week. 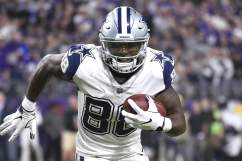