Getty Ezekiel Elliott and NFL Commissioner Roger Goodell pose after he was selected to the Dallas Cowboys.

Ezekiel Elliott 6 game suspension has been upheld by Harold Henderson, per source

No question, Elliott's legal reps and NFLPA will vigorously continue the fight beyond tonight.

Even with Henderson’s ruling, Elliot could still be eligible to play if his temporary restraining order is granted.

According to a report, Elliott could be eligible to suit up for Week 1 of the NFL season.

Mike Fisher, a Cowboys insider for 105.3 The Fan in Dallas, said he was informed by a courtroom source that a federal judge answered “yes” when asked if Elliott will be eligible to play Week 1 against the New York Giants.

However, Fisher later clarified his report, saying that even with Elliott cleared to play Week 1, the NFL still has the ability to do “whatever it wants to do.”

Absolutely true. NFL told #Cowboys that @RandyGregory_4 could return to field. Then inexplicably pulled the plug. So … anything goes. https://t.co/w6yI4NsuTj

NFL Network’s Ian Rapoport had reported earlier in the day that a ruling on the suspension had to be made by 4 p.m. Eastern on Tuesday, or he would indeed be eligible to play Week 1.

A ruling on Ezekiel Elliott’s appeal must be given by 4pmET Tuesday. If not, the RB will be eligible to play on Sunday.

However, Elliott’s status for Week 2 is still up in the air due no official ruling from the judge on the motion as of yet.

Elliott went before Judge Amos L. Mazzant on at the U.S. District Court for the Eastern District of Texas on Tuesday regarding a motion that was filed by the NFLPA for a temporary restraining order to be imposed against the running back’s six-game suspension. The NFL had suspended Elliott on August 11 for six games after an internal investigation into domestic abuse allegations. He appealed it five days later.

Elliott and his lawyers then filed a petition in federal court to block a ruling against his appeal, accusing the NFL of having a “conspiracy” against him, Pro Football Talk’s Mike Florio reported.

On September 4, USA Today‘s A.J. Perez reported that the NFL filed a motion to dismiss the case from district court because they said Elliott didn’t “have the legal standing to challenge in federal court a six-game suspension over domestic assault allegations.”

Hours before Tuesday’s hearing on The Fan, Cowboys owner Jerry Jones said he would “have good news for you as we get into the week,” but wouldn’t go much further.

“I don’t want to make the comment, and I know y’all can imagine with all that we have flying around the courtrooms and the basic hearing rooms,” Jones said during the interview. “That would be one I’d pass on this morning.”

The domestic abuse allegations against Elliott come from a woman who describes herself as his ex-girlfriend. She brought forth photos that show brusied on her knee, arms and neck and accused Elliott abused her for months.

“It finally got out of control to where I was picked up and thrown across the room by my arms. Thrown into walls. Being choked to where I have to gasp for breath. Bruised everywhere, mentally and physically abused,” she said in a caption of the photos.

As told in a press release from the city of Columbus, charges would not be pressed on Elliott for the five alleged incidents.

“This is primarily due to conflicting and inconsistent information across all incidents resulting in concern regarding the sufficiency of the evidence to support the filing of criminal charges,” the press release said. 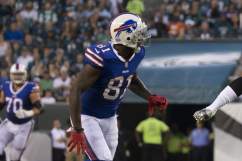