Buffalo Bills wide receiver Anquan Boldin shocked many when he abruptly announced Sunday that he’s decided to retire from football.

Many wondered why Boldin came to the sudden decision to call it quits after playing wide receiver in the league for 14 seasons.

Boldin cleared the air on his retirement with a powerful statement released via Twitter.

“Football has afforded me a platform throughout my career to have a greater impact on my humanitarian work,” Boldin wrote. “At this time, I feel drawn to make the larger fight for human rights a priority.

Statement from Anquan Boldin on his decision to retire: pic.twitter.com/z19jekK33R

Boldin, who will turn 37 in October, signed a one-year deal with the Bills on August 7 worth up to $4 million. It was the fifth team he’d be playing for in his career.

“In my opinion, Anquan Boldin is a Hall of Fame player,” Bills general manager Brandon Beane told reporters after the signing. “Add that to winning the Man of the Year Award and we’re excited.”

As Beane alluded to, Boldin won the Walter Payton Man of the Year award in 2016 as a member of the San Francisco 49ers. It was his philanthropy that earned him the award.

In 2004, he establised the Anquan Boldin Foundation, which seeks to expand the education and life opportunities for underprivileged children.

“When I first got into the NFL nobody could tell me anything,” Boldin said during his NFL Honors speech. “I was living life. I had achieved my dream of one day making it into the NFL, but I soon realized that’s not what life is all about.

“I realized my purpose in life was not to make it to the NFL and score touchdowns. God put me on this earth for something much bigger than that and I realized and understand what my purpose is now. … It’s my prayer and my hope that I can live out the rest of my life honoring God and help as many people as possible.”

Watch his acceptance speech below:

After playing collegiate football at Florida State University, Boldin was selected in the second round of the 2003 NFL Draft by the Cardinals (No. 54 overall).

Last year, Boldin played for the Detroit Lions and had a 70.5 percent catch rate, closing the season with 67 catches for 584 yards and 8 touchdowns. His best statistical season came in 2005 when he caught 102 passes for 1,402 yards and 7 touchdowns as a member of the Arizona Cardinals. 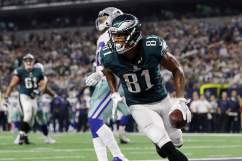