2016’s No Mercy event turned in a pretty solid performance for the SD Live brand.

But for 2017, Raw is being handed the reigns to that WWE PPV staple. And by the looks of things, Kurt Angle’s brand is set to rival the Blue Brand’s take on the show. The Universal Championship main event will erupt into a mega hoss battle between the champ (Brock Lesnar) and his behemoth challenger (Braun Strowman). Then, two of WWE’s biggest franchise players will face off in a dream match that’s WrestleMania worthy – John Cena vs. Roman Reigns. For such a B-level PPV, No Mercy 2017 is jam packed with marquee matches that aim to please.

It’s time for me to break down each and every match, then offer my predictions on who will win it all at No Mercy 2017.

Predictions & Winner: Apollo Crews mopped the floor with Curt Hawkins on this past episode of Raw, so now he’s onto facing another mid-carder who’s floundering as much as he is. Crews gets the win here just cause. Can these guys get a decent storyline with some actual character development, please? These meaningless Kickoff Show matches aren’t doing guys like them any favors…

Predictions & Winner: The way the universe works is so confusing and ever so cruel. Big Cass was supposed to be the one making better strides after splitting up with his former boy Enzo. Then out of nowhere, Enzo defeats Cass in a street fight and the big man is forced to leave the arena in an injured state. So now, Enzo has actually moved on to bigger and better things by aiming his sights at the Cruiserweight Championship. His numerous wins on Raw and 205 Live have pushed him into top contention for Neville’s championship (which is something that still baffles me). To put it bluntly, Enzo sucks in the ring. But the man can talk, which is always a plus in the WWE. Yet I still can’t fathom Enzo defeating Neville, who’s still experiencing a career high. That bump in the road committed by Akira Tozawa to Neville didn’t do too much harm to him since he easily regained the title. And I’m sure he won’t let Enzo be the one to stop him so soon into his 2nd Cruiserweight Championship run.

Predictions & Winner: So this match actually turned out to be a pretty solid contest at SummerSlam. But it wasn’t as epic as it should have been. Bray hardly tapped into his mind games and just let Finn run roughshod over him. I totally get that Finn was in Demon form, but Bray still should have gotten more decent offense in. Welp, it looks like Finn is going to be forced into wrestling under his normal guise this time. There’ll be no demonic antics here as Bray has called out Finn for a man-to-man rematch. I figure Bray’s due for one of those “Hey look guys, I’m still a threat!” wins, so I’m going with him. This’ll set up a tie breaker matchup between both men that’ll probably go down on a random episode of Raw.

Predictions & Winner: Sasha Banks’ championship run booking is so strange to me. She’ll win it during some triumphant match on Raw or on PPV, then lose it mere weeks later to the former title holder. She deserves a lengthy run with Raw’s Women’s strap, but it looks like that’s a pipe dream for now. She’s going to take on Miss Bliss once again, but now both ladies have to keep their eyes on their back. Nia Jax and Emma have been inserted into their rematch proceedings, which is pretty cool if you ask me. Emma’s one of the more underrated female competitors on Raw, plus Jax is steadily improving. Then there’s the X-Factor in all this – the fully healed Bayley. I think she’ll be the one who’ll take Banks’ focus away from the champ in some form or fashion. Their friendly rivalry will probably take a turn for the worse due to the outcome of this bout. I’m very much looking forward to this match since all five women are capable of performing at the highest level during multi-women matches. Bliss is a sneaky lil’ she-devil who tends to come out on top more often than not, so I’m selecting her as the victor here. 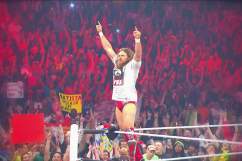