Twitter Aaron rodgers was carted off the field after suffering an apparent shoulder injury Sunday.

The injury typically takes about seven-to-eight weeks to recover from, and Rodgers suffered the same injury a few years ago.

It occurred when Rodgers was slammed to the ground hard by Vikings linebacker Anthony Barr following a 2nd-and-9 incomplete pass. As he hit the ground, Rodgers’ shoulder rolled hard and he laid in visible pain after the play. He was evaluated by trainers on the field before being helped to the sideline and was eventually carted to the locker room for further evaluation.

The Packers described it as a right shoulder injury, and he was listed as out for the remainder of the game.

Watch a video of the hit below:

Here's the injury to Rodgers. Barr brings him to the ground and he lands on his throwing elbow/shoulder. #Packers pic.twitter.com/fIcN6g0yIE

Backup quarterback Brett Hundley took the field in Rodgers’ absence and threw an interception on his first pass and a touchdown on his second. The Packers ended up lost the game, 23-10.

After the game, Packers coach Mike McCarthy said Hundley will remain the quarterback moving forward and made it sound as if there’s no expectation they will sign a free agent.

McCarthy: As far as the QB position, Brett Hundley is my quarterback, Joe Callahan is the backup. That's the direction we're going. #GBvsMIN

Rodgers has stayed relatively healthy throughout his career, aside from suffering a fractured clavicle (collarbone) during the 2013-14 season. Rodgers was hurt in Week 9 of the season on a sack by the Chicago Bears’ Shea McClellin, and his status fluctuated from week to week. Eventually, he was cleared to play again during the final week of the season.

Rodgers led the Packers to the victory against the Bears in that game, throwing for 318 yards and 2 touchdowns to win the NFC North championship. 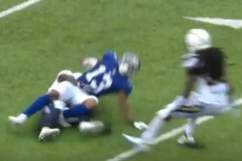