YouTube Odell Beckham Jr. was suffered a serious injury in a game against the Los Angeles Chargers on Sunday.

During the fourth quarter against the Los Angeles Chargers, OBJ leaped to catch an Eli Manning pass, but he was immediately brought down by a Chargers defender. As his right leg planted, the defender inadvertently rolled up onto his ankle, the receiver OBJ into extreme pain.

An emotional OBJ laid on the ground in tears as trainers tended to him, and he was carted off the field in obvious pain. The Giants believe the fourth-year receiver suffered a broken fibula, and an MRI will reveal if there is any ligament damage. According to ESPN’s Adam Schefter, OBJ “could” have surgery, but a decision hasn’t been made yet.

Giants WR Odell Beckham Jr. fractured his ankle. He could have surgery but no decision yet.

Watch the video of OBJ’s injury below:

The injury will put OBJ onto the injured reserve list for at least eight weeks.

OBJ was the fourth Giants receiver to exit the game early, with Brandon Marshall, Sterling Shepard and Dwayne Harris all leaving with injuries. Harris broke his foot while Marshall and Shepard suffered ankle injuries.

During the preseason, OBJ sprained his right ankle and missed the first game of the season because of it. Since then, though, the injury hasn’t slowed him. He left the Chargers game with a season-high 97 yards receiving and 1 touchdown.

Since he was drafted in 2014, OBJ’s quickly risen to be one of the premier receivers in the NFL. He’s eclipsed 1,300 yards receiving and scored at least 10 touchdowns during each of his three seasons. It was expected that he’d ink a massive contract this offseason.

The Giants exercised Beckahm’s fifth-year option during the spring, and he expressed his desire to be the top-paid player in the NFL during training camp.

“I leave that in the hands of the man above,” Beckham said in June about a possible contract extension. “When that time comes that time comes. Right now is really not the time to discuss it.” 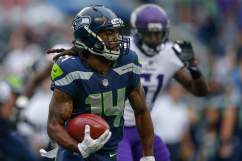 J.D. McKissic’s Fantasy Value: With Chris Carson Injured, Is He Worth Picking Up?