The Chiefs square off with the Redskins on Monday Night Football.

The undefeated Kansas City Chiefs take on the Washington Redskins on Monday Night Football. According to OddsShark, the Chiefs are favored by seven, and the over-under is set at 48 points.

Washington has yet to play a game this season where they hit the over. Two games hit the under while one ended in a push. Two of the Chiefs three contests hit the over.

The OddsShark computer likes the Chiefs chances of remaining undefeated. The computer projects a 27.6-14.5 Chiefs victory. The computer is taking the Chiefs to cover the spread, and the under on the point total.

Kansas City is coming off a 24-10 road victory over the Chargers. The Chiefs most notable win came in the NFL’s opening game of the season at New England. The Chiefs defeated the Patriots 42-27 in what was a major statement game for the Chiefs. Kansas City also has a win over the Eagles.

Washington has won two straight games after losing their opening game against Philadelphia. The Redskins are coming off a 27-10 victory over the Raiders. Washington also got a road win against the Rams.

What team has the edge in tonight’s matchup? Kansas City’s defense gives the Chiefs a huge edge, and the Chiefs also have one of the best home field advantages in the league. Look for the Redskins to hang around, but the Chiefs will begin to pull away in the fourth quarter. 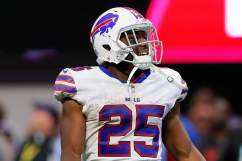 Read More
Football, NFL, Odds, Sports Betting
The Kansas City Chiefs take on the Washington Redskins on Monday Night Football. Find out the latest Vegas odds, and our pick against the spread.