It’s only Week 4 in the NHL, but certain trends are emerging amongst the 31 teams.

In the Eastern Conference, the Tampa Bay Lightning continue to dominate, while the defending champion Pittsburgh Penguins are coming off yet another lopsided loss. Over in the west, the Vegas Golden Knights make expansion history as the L.A. Kings surprise us with a solid start.

We break down each of our top 10 picks in this week’s NHL power rankings.

The Tampa Bay stars both extended their season-opening points streaks to nine games— making them just the second teammates to have season-opening nine-game point streaks in the last 24 seasons. They’ve combined for 34 points to become one of the most formidable duos in the NHL.

The Lightning are off to a hot start and are an extremely well-balanced team.

Let’s not get too ahead of ourselves, but the last time the Bolts started off 7-1-1 was 2003-04— the same season Vinny Lecavalier and Marty St. Louis led the franchise to its first title. Just saying.

On Thursday, Tampa Bay had its best defensive showing yet, holding a strong Columbus team without a goal in a 2-0 shutout.

Their last six wins have been against stiff opponents: the Capitals, Penguins, Blues, Red Wings, Blue Jackets and Penguins again.

Coach Babcock’s team is looking like Stanley Cup contenders, and their young crop of talent is serving them well. Auston Matthews has a skillset that continues to ignite their offense. The 20-year-old has scored 7 goals in 8 games. While Matthews has stolen the spotlight, this offense has depth.

The Maple Leafs can roll out three scoring lines and still have some offensive talent on the fourth line.

However, they’ll need their defense to step it up down the stretch. The Leafs are looking to get back to their winning ways tonight against the Los Angeles Kings.

The Blackhawks own a top 10 offense and a top 10 defense.

Patrick Kane has a league-leading 11 points, while Ryan Hartman has nine. However, this team isn’t just relying on its stars to score. Six of their skaters have at least six points.

However, the Hawks have an average of 36.8 shots allowed per game. That’s the most in the NHL, and an area they’ll need to address.

I’ll admit, I slept on them too. Not only are they winning, but we’ve seen a very different Kings team than the one we’re used to.

L.A. is on its best opening stretch in franchise history. Seven games into their season and the Kings still have yet to lose a game in regulation. After finishing the season at 22nd overall last year, the Kings rank fifth in the league.

Do they have what it takes to move from a fringe playoff team back to being a Stanley Cup contender?

It may be soon to tell, but there’s a lot to like about the way this Kings team is playing.

The team is producing more shots than last season with 46.7 shot attempts per game.

The biggest changes have come from Anze Kopitar and Dustin Brown, who have 11 points each. Kopitar leads the team with 6 goals, and Brown has notched 5.

The Knights are the first NHL team to win six of their first seven games in their inaugural season. Expansion team or not, that’s a solid start.

James Neal is a big reason why. The former Stars and Predators winger has six goals in the first seven games. Forwards Reilly Smith and William Karlsson are also emerging as leaders. They’ve combined for 11 points.

Goaltending is the biggest concern for the team. We knew playing without Marc-Andre Fleury, who is out with a concussion, would be a challenge. But now, his replacement, Malcolm Subban, is expected to miss 4 weeks after suffering a lower-body injury Saturday against the Blues. Oscar Dansk is likely to get the start on Tuesday.

This NHL season has been full of surprises already, hasn’t it? And the Devils have been one of the biggest ones so far.

Jesper Bratt and Will Butcher have led the way. After scoring three goals in his first two games, Bratt has slowed in the points department. However, he has established himself as one of the team’s top penalty killers. Butcher became the first rookie defenseman in NHL history to produce eight assists in his first five career games. A guy by the name of Sidney Crosby had seven assists in his first six NHL games back in his rookie season in 2005. Seems like Butcher is one the right track.

However, the Devils will face their biggest test yet with Cory Schneider out. New Jersey’s offense is looking to rebound after coming up blank for the first time this season against the San Jose Sharks on Saturday night.

The injuries are piling up for the Blues, but they’re managing the challenge well.

Now for the good. They’re powerful and fast at even strength. St. Louis is also leading the league in blocked shots. Those are very positive signs for a team missing as many key players as the Blues.

They have a group of hungry forwards along with a solid goaltender. Ottawa is determined, and capable of giving any opponent a challenging game.

An overtime loss to the Devils, and a 6-3 win over Toronto shows the Senators can compete.

What’s even more impressive is that they’ve done most of their work without Erik Karlsson. The captain made his triumphant return on Tuesday night against the Canucks. Karlsson has racked up six assists in the three games he’s played. After a devastating injury, he’s looking like he’s back to his old self, which should be very encouraging for Sens’ fans.

After the Flyers’ 2-1 win against the Edmonton Oilers on Saturday, Philadelphia improved to 5-3-0, with three wins coming in their last four games.

The Flyers have scored 28 goals and allowed just 18.

And then of course, there’s Wayne Simmonds, who leads the team in goals with 6. The veteran forward has racked up 9 points in 8 games.

How do they stack up in the Eastern Conference? Time will tell. Only 10 of their first 33 games come against conference opponents.

The Columbus Blue Jackets have faced some difficult opponents over the past few games, and they’ve fared well.

Sergei Bobrovsky is looking like a Vezina Trophy contender once again. He’s been solid out of the gate, posting a .927 save percentage in six starts.

Their offense is also holding their own and entering Monday, ranks 14th in goals per game.

Artemi Panarin is proving to be quite the addition, and continues to make a difference, especially with his speed. Panarin has racked up nine points in his first eight games. 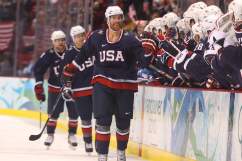 Read More
Hockey, NHL
Which teams are hitting their stride and which teams are struggling? We break down each of our top 10 picks in this week’s NHL power rankings.