Getty Ryan Malone celebrates with his team mates after he scored during the ice hockey men's semifinal game between the United States and Finland on day 15 of the Vancouver 2010 Winter Olympics.

After much speculation, the National Hockey League announced in April that it will not participate in the 2018 Winter Olympics in PyeongChang, South Korea.

The NHL won’t allow any player with an NHL contract, including those with two-way contracts who get sent to minors, to compete in PyeongChang.

The controversial decision brought an end to NHL players participation in the Olympics, which has been allowed for the past four Winter Olympic games.

Several NHL stars voiced their disappointment with the NHL’s decision for the 2018 Olympics, including Alex Ovechkin, who initially said he would leave his team to play for Russia.

In September, Ovechkin made it clear that he won’t try to pursue temporary leave for the upcoming Olympics.

The National Hockey League Players’ Association released a statement against the decision in April.

The players are extraordinarily disappointed and adamantly disagree with the NHL’s shortsighted decision not to continue our participation in the Olympics,” the statement read. “Any sort of inconvenience the Olympics may cause to next season’s schedule is a small price to pay compared to the opportunity to showcase our game and our greatest players on this enormous international stage.

While some of the most recognizable names in hockey won’t be taking the ice, Team USA is still eyeing a podium finish.

“We expect to compete for a medal, and this will be no different,” said Tony Granato, the Team USA coach for the Olympics, according to the Los Angeles Times.

The U.S. will now form a team of NCAA college athletes, junior players and professionals competing in other leagues outside of the NHL.

USA Hockey will evaluate 2018 Olympic hopefuls at the Deutschland Cup in Germany in November.

Here’s a look at some of the most notable names who are eligible to compete for Team USA:

Chris Bourque is the son of Hall of Famer Raymond Bourque. The forward led all skaters with seven goals at the 2006 World Junior Championship. He is on an AHL-only contract and totaled 77 goals over his past three NHL seasons.

Malone left the NHL in Feb. 2015, after the Rangers placed him on unconditional waivers and terminated his contract. The 37-year-old forward won a silver medal during the 2010 Olympics in Vancouver. A former 20-goal scorer with the Tampa Bay Lightning, Malone landed a professional tryout with the Minnesota Wild. He was released from his PTO in Minnesota on September 29, but continues to train for a spot on the Olympic roster.

Troy Terry was a a member of the gold-medal winning U.S. National Junior team during the 2017 World Junior Championship. Terry went 3-for-3 in shootout attempts to lead the U.S. past Russia in the semifinals, then scored the only shootout goal of either nation in the final against Canada. That same year, Terry helped the University of Denver to an NCAA title. He netted nine goals and added eight assists for 17 points in 18 games.

The 28-year-old forward finished second in goals (25) and first in points (55) in the Swiss National League this past season. Arcobello is a former NHL player who brings experience from four different teams: the Arizona Coyotes, Nashville Predators, Edmonton Oilers and Pittsburgh Penguins.

Nathan Gerbe signed with the Swiss League in October 2016 after playing in 394 career games between Buffalo and Carolina. He collected 138 points (58 goals, 80 assists) while playing in the NHL.

Former NHL player Drew Shore scored 24 goals in the Swiss League. The 26-year-old was selected by the Florida Panthers in the second round (44th overall) of the 2009 NHL Entry Draft.

Ryan Zapolski has extensive experience in the ECHL and KHL. He played Division I college hockey for Mercyhurst from 2007 to 2011. His best college season was 2008-09, with a save percentage of .934.

He currently plays for Helsinki-based Jokerit in the Kontinental Hockey League. His goals-against average is 1.18. 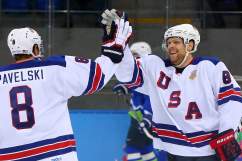 Hockey Qualifications for the PyeongChang 2018 Olympics

Read More
Hockey, Sports, Winter Olympics 2018
While NHL players won’t be taking the ice for Team USA, there are still many notable prospects. Here's a look at who may be on the roster for the 2018 Winter Olympics in PyeongChang.