Getty Yasiel Puig of the Los Angeles Dodgers is congratulated by Curtis Granderson after hitting a 2 RBI home run in the fifth inning against the Colorado Rockies at Coors Field on September 30 in Denver, Colorado.

The Los Angeles Dodgers earned the top seed in the National League for the 2017 postseason. They will play the winner of the NL Wild Card Game between the Colorado Rockies and the Arizona Diamondbacks.

The NLDS series starts Friday and it will be televised by TBS, though the start time and pitching matchups for Game 1 haven’t yet been announced. However, Clayton Kershaw will in all likelihood get the start for L.A., as he’s been lights out all season long yet again.

The one-game playoff between the Rockies and D-Backs is scheduled to start at 7:08 p.m. Eastern on Wednesday, October 4.

The Dodgers completed a historic regular season, compiling the best record in the MLB by going 103-58 overall. They claimed their fifth-straight National League West title during the season, and it wasn’t really ever close. They were led all season by a potent offense and stellar pitching.

Justin Turner has led the charge at the plate with a .321 batting average, while rookie sensation Cody Bellinger has exceeded expectations. He’s led the team with 94 RBIs, 39 home runs and 86 runs scored while batting .273.

Here’s a look at the future schedule for the NLDS series:

NOTE: Some times still to be determined. 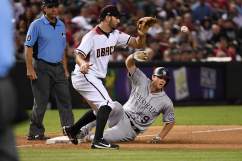