Getty UCFs Scott Frost is one of the most coveted head coaches in college football.

As UCF moved into the top 15 in both the AP and Coaches Polls, today should have been a day of celebration. Instead, Scott Frost rumors went from whispers to being yelled through a megaphone. Florida became the first marquee college football program to fire their head coach as the Gators parted ways with Jim McElwain.

In a matter of minutes, Frost was listed as the Gators head coach on his Wikipedia page, and Twitter began buzzing about the Gators potentially looking to their neighbors to the south for their next head coach. Frost has long been one of the most coveted football coaches in the country.

In case you have not been following, here is what Frost has accomplished at UCF. The Knights have the number one scoring offense in the country, and are a perfect 7-0 just two years after going winless. In his first season, Frost led UCF to a bowl game, and began transforming the Knights into a potent offense.

It is not just what Frost has done on the football field, but the little things that have helped grow the program. After hearing complaints about UCF’s stale uniform combinations, Frost put in a call to Phil Knight (yes, that Phil Knight) to have Nike put together custom uniforms that were more appealing to the young players Frost would be recruiting. Knight owed him a solid after Frost allowed Knight to sit in the coaches box during Oregon games when Frost was the offensive coordinator.

If you were designing a top college football coach in a video game, Frost would be the prototype. Frost played at Stanford, but his best years came at Nebraska where Frost ran the option all the way to a 1997 national championship. Through both his playing and coaching career, Frost has learned under a number of top coaches including Tom Osborne, Bill Walsh, Mike Tomlin and Chip Kelly.

UCF isn’t just battling Florida, but the entire country in their efforts to retain Frost.

UCF Will Try to Appeal to Scott Frost’s Legacy

If you are not familiar with UCF, this is not an under-resourced mid major program that Frost just jumped at the chance to get his first head coaching job. Frost turned down Power Five jobs like Syracuse in favor of the Orlando sunshine. UCF’s enrollment of 64,000 makes it the second largest university in the country.

As the video below details, UCF is in the process of building a lazy river (YES, A LAZY RIVER) as part of a brand new athletic village for student-athletes.

This will go with an indoor practice building and other facilities UCF previously had to stay competitive with top programs in the country. More important than all of this, UCF is located in Orlando, a major city home to some of the country’s top football recruits every year. Frost smartly targeted UCF when he left Oregon, because he knew he could get the speed he needed to run a similar version to Kelly’s Oregon offense.

The Knights have a long history of sending players to the NFL including Daunte Culpepper, Brandon Marshall, Blake Bortles, Josh Sitton and a host of others. Frost did not introduce success to UCF, but does have a chance to take the program to even greater heights. Under George O’Leary, UCF dominated Baylor in the 2014 Fiesta Bowl despite being more than a 20-point underdog.

O’Leary’s time eventually wore out, and the fan base grew restless with the old-school coach’s resistance to change. After starting 0-8, O’Leary resigned leaving a program that had declined rapidly since its Fiesta Bowl season. Frost was met with a series of requests from frustrated UCF fans, and it is time for UCF fans to recognize Frost (and the university) has helped meet those demands.

Fans wanted killer uniforms, and the Orlando faithful got more than they bargained for. Here is exhibit A, space-themed helmets with a UCF logo that looks similar to the moon.
https://twitter.com/darrenrovell/status/917871470566572033/photo/1

Other requests included names on the back of the jersey and more night games. Check and check. Finally, an offense that makes fans excited to go to games. O’Leary’s three rushes and a punt had grown tiresome. Two years in, and Frost transformed UCF into averaging over 47 points a game.

UCF has long had a core group of dedicated fans who have supported the team even when it was bad football in a dilapidated Citrus Bowl. Tune into a Knights road game against a major opponent, and you will see a fan base that travels well. Despite all this, attendance has been a concern this season as many fringe fans have stayed at home.

If you are a football fan in Orlando slow to come to the party, here is what you need to understand. You have the prettiest date at the ball, and if you don’t do everything in your power to take care of that date, they will end up dancing with someone else.

UCF hopes to retain Frost by emphasizing he could be a legend at UCF as opposed to just another good coach in a long line of good coaches at an older program. The school launched the UCF Excellence Fund to increase donations which could also be renamed “Help UCF Stay Frosty”.

Since the College Football Playoff started, the big question has been just how far a Group of Five team could go if they went undefeated. After other teams fell short, we could be on the verge of finding out just that if UCF can finish with a strong November. The Knights sit at No. 15 in the AP Poll, and it will be interesting to see how the committee views UCF when the initial rankings are unveiled.

This is where the Big 12’s missteps in failing to add UCF and USF could really hurt the program. For all UCF can offer, the biggest challenge is access. If UCF runs the table, they will head to a New Year’s Six bowl game, but the question remains whether this is as far as the program can go under the current system.

Here is what is critical for UCF fans to understand. This is not UCF against Florida, but UCF versus college football. It just so happens that what could end up being UCF’s best season in school history coincides with a number of job openings at Power Five programs. Tennessee, Nebraska and Ole Miss are just a few of the likely openings.

Nebraska has long been the sentimental favorite to lure their former quarterback back to Lincoln. However, it is not a given the situation is more appealing than UCF. ESPN’s Todd McShay recently said as much in an interview on the The Ryen Russillo Show.

“I’d rather be at UCF [than Nebraska]. There is so much talent at UCF, in that area,” McShay noted (via WKMG).

Sports Illustrated’s Andy Staples noted a similar belief. Since shortly after arriving in Orlando, Frost has deflected questions about his future, noting he had “unfinished business” to take care of at UCF. It remains to be seen whether this business is just starting, or the 2017 season fulfill’s Frost’s goals when he took over the job.

One thing is for sure, Frost will have plenty of suitors with Florida being the first of many to come knocking. 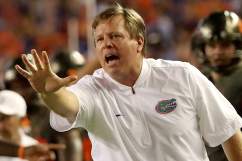