Getty Jim McElwain has been fired as Florida head coach.

Football Scoop’s Zach Barnett reports Jim McElwain has been fired at Florida. In case you had not been following, things were weird in Gainesville. Not only is Florida struggling on the football field, but the program is surrounded with drama. Last week, McElwain claimed he and his family were receiving death threats after Florida’s slow start.

This prompted the university to issue a statement saying they had not seen proof of these threats. McElwain then declined to elaborate as this dissension took place publicly in the days leading up to Florida taking on rival Georgia.

As the McElwain era ends, let’s take a look at the top five candidates for Florida to pursue as their next head coach.

With the Gators firing McElwain before season’s end, it is a good indication Florida is looking at a coach that is already available. Coaching hires are one big pendulum swing. Florida hired McElwain as the Colorado State offensive guru to replace Will Muschamp’s boring offense. What happened? McElwain’s offense was just as boring leaving plenty of irate Florida fans.

Look for Florida to go on the offensive again to appease a restless fan base longing for the Tim Tebow offense of old. For all of his disappointment in the NFL, Kelly revolutionized college football offenses, and knows how to coach at the college level. He’ll be the most coveted name this off-season as several Power Five jobs open up. The Gators can get a head start on Kelly before firing season begins in December.

Coach Frost was "wired up" for @CollegeGameDay this week!

As a UCF alum, it pains me to write this, but Knights fans should be more worried about Florida than Nebraska. Nebraska may be the sentimental favorite, but Frost could easily construct what he has built in Orlando a couple hours north. As ESPN’s Todd McShay pointed out, Frost is likely able to pull better recruits at UCF than he would be able to get at Nebraska.

In Gainesville, Frost can do everything he is doing at UCF with more resources and the SEC name attached to his program. Frost has built college football’s No. 1 offense at UCF as the Knights are averaging 47.3 points per game.

Frost is a Kelly disciple, and has combined the Oregon offense with Florida athletes. Talk about a player’s coach, Frost ran the scout team offense as UCF prepared for Navy’s triple option. UCF will be in the fight of their life to keep Frost from going to a program in a bigger conference this off-season. Here’s Frost looking more capable than many current college quarterbacks.

Catch all the action at 3:30 PM ET on CBSSN! pic.twitter.com/viohODXmvh

Frost has the pedigree all college football programs covet. He played quarterback at Nebraska under Tom Osborne then went on to have an NFL career. In addition to Kelly and Osborne, Frost also learned from Scott Walsh and Mike Tomlin.

Two seasons after going winless, UCF is a perfect 7-0 and the favorite to represent the Group of Five at a New Year’s Six game. Had UCF’s game against Georgia Tech not been canceled because of Hurricane Irma, we could be looking at a top 10 program.

As the former USF head coach, Taggart knows the state of Florida. Taggart left Tampa this off-season for the great Northwest to try to bring Oregon back to prominence. The results may not have come along as quickly as Ducks fans would like, but Taggart has proven at every stop he can transform a college football program if he is given a few years to build it.

Like the other names on this list, Taggart has proved he is capable of building a dynamic offense. Taggart transformed USF into one of the best offenses in the AAC. While not the Oregon offense of old, the Ducks are still averaging over 30 points a game, and Taggart is bringing a more balanced attack to Eugene.

Then a schematic shift borne out of the desire to make the most of Flowers’ athleticism sent Taggart on a journey of enlightenment that ended with him joining the spread run-pass option revolution. Now he’s taking that system, along with his recruiting and program-building techniques, up to Oregon.

At USF, Taggart’s power-coast offense finished 118th in S&P+ in 2013 and 116th in 2014. After some reorienting around the spread RPO and Flowers, the Bulls finished seventh in the same metric last season, with one of the best offenses in the country.

Campbell may be the least sexy name on the list, but he has built a winning program in Aimes, a tricky place to compete. Campbell is hitting his stride in his second season as Cyclones head coach. Iowa State has upset wins over Oklahoma, TCU and Texas Tech this season. The Cyclones are now a legitimate threat to win the Big 12.

Campbell came to Iowa State after two straight nine-win seasons at Toldeo. Campbell would be able recruit much better athletes at Florida, but Iowa State is averaging 31 points per game this season.

ESPN analyst Kirk Herbstreit has been one of Campbell’s biggest proponents.

After years of the Mad Hatter being a thorn in the Gators side, why not have Miles join enemy lines? Miles does not fill Gators fans thirst for an offensive mastermind, but he has years of experience of being a successful college football coach. Miles’ time ran out in Baton Rouge, but don’t think he is not still capable of building a winning program.

Miles spent four seasons at Oklahoma State then moved on to LSU for 12 seasons. Over his career, Miles is 142-55 which equates to a 72 percent win percentage. Fans would be wise not to let recency bias cloud their vision on how good of a coach is now sitting at home on Saturdays instead of on the sidelines.

Miles has made it clear he wants to coach again. Back in August, He detailed his plan to Bleacher Report’s Adam Kramer.

I want to accomplish that again [winning a national championship]. It’s an intoxicating feeling…I felt like this time away helped me resolve some issues with where I wanted to go and what I wanted to do. It’s pretty obvious now what I want to do. I want to hire a great staff and chase a national championship at a place that wants this pursuit. I want to recruit again. I want an AD and president to say, ‘I’m with you, let’s go do this.’ I want them with me.

By the way, Miles recruited current Gators quarterback Feleipe Franks, and Franks originally committed to play under Miles at LSU before flipping to Florida. 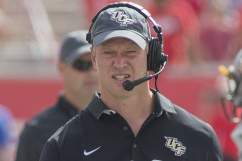