Getty Fans are wanting Tony Romo to make an appearance for his hometown team.

Consider this the first official “Tony Romo should come out of retirement” siting of the season. NFL Network’s Kay Adams noted on the Fantasy Zone’s live coverage that there could be some intrigue over a potential Romo return in Green Bay. It is important to note Adams was not reporting this as a rumor, but did wonder if it could have potential.

Just wondering: what if the Packers called Wisconsin’s own Tony Romo…?

The story really gained steam after Troy Aikman suggested during a broadcast the Packers could lure Romo out of retirement.

Troy Aikman just said that Kaepernick can't help a team and that the #Packers can perhaps coax Tony Romo out of retirement. ?

Romo is originally from Burlington, Wisconsin. Could Romo consider dropping his new announcer headset in favor of a Packers helmet? It would be hard to envision Romo returning after missing nearly two months of the season. Romo would be stepping into a Packers offense that is extremely beat up.

Romo told NFL.com in July that he had no plans of making a return.

Oh yeah, probably a good chance [of returning to the NFL]. We’ll see how it plays out. I think you’ll find — I’m joking. Like I said before, I’m done…

I’m pretty happy and excited about the opportunity that was presented to me. I got coach Jim Nantz teaching me all the tricks of the trade that I’m going to be behind on, but I’m improving fast. I’m excited about it. It gives me a chance to compete, get better and improve. I get to be passionate about the game, hopefully teach a little bit, hopefully make it a little bit entertaining along the way. It’s going to be fun.

While there appears to be a slim chance of Romo returning, this story does have more legs given Romo’s Wisconsin connection. Romo did grow up a Packers fan. He detailed his admiration for Brett Favre in an interview with ESPN.

I still look up to him [Brett Favre] Anybody who grew up in Wisconsin, everyone knows who Brett Favre is and what he’s meant to Green Bay and Wisconsin life. They come around once in a generation. Green Bay’s been lucky enough to go from Brett to Aaron [Rodgers] and that’s just unrealistic in real life to have that happen in professional sports. But Brett getting inducted is one of the most no-brainer things that’s ever taken shape. I’m just glad to see the reunion of that two that has happened.

The logical part of us should say there is no way this happens. Romo’s last two attempts to play football ended in season-ending injuries. It is also extremely unlikely Romo has been staying in football shape during his new announcing career. The Packers also have one of the better backup quarterbacks in Brett Hundley.

However, the made-for-TV movie of Romo coming out of retirement to rescue his hometown team makes us stop just short of dismissing it entirely. This would be a hard one for Cowboys fans to swallow given how the Packers have had Dallas’ number over the last few years.

Don’t expect Romo to leave the booth to make another NFL run. There is also a strong possibility the Packers want to see what they have in Hundley after investing three years in developing the quarterback. That said, don’t expect this story to die anytime soon. 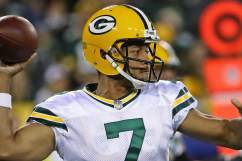