WWE Hell In A Cell Kickoff: Oct. 8, 2017The Hype Bros look to get themselves back on a winning streak as they face off against the freshly minted team of Chad Gable and Shelton Benjamin on the Hell In A Cell Kickoff! Catch the match and pre-show analysis from a panel of experts and all of the late-breaking news before Hell In A…2017-10-09T00:07:51.000Z

The most heated feuds in WWE have been settled under the most dangerous conditions.

Street Fights, Last Man Standing affairs, TLC spectacles and more have all played the part as battleground for super intense rivalries. One of the most intimidating structures in pro wrestling is the dreaded Hell in a Cell. SmackDown Live have been bestowed the honor of putting the match card together for this year’s HIAC event and, to put it simply, they did a fine job. Kevin Owens and Shane McMahon, plus The New Day and The Usos will finally settle their differences within the massive steel cage. Also on the card, AJ Styles will defend his US Championship against Baron Corbin while WWE Champion Jinder Mahal will lock horns once again with Shinsuke Nakamura.

If you’re looking for all the match results and highlights of everything that took place at HIAC 2017, you’ve come to the right place. 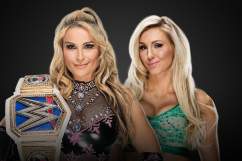 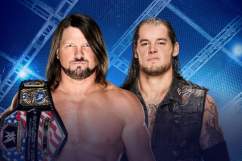 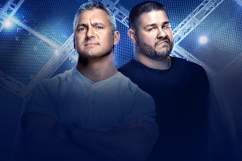 Highlights: Gable and Mojo started the match for their respective teams. Both men got into a lockup war, but Gable got the better of Mojo and tagged in Shelton. Shelton kept working over Mojo’s arm before he tagged Gable back in to continue the job. Mojo eventually broke free and got into a move exchange war with Gable and then pulled off a tag team maneuver with Ryder. Ryder laid in a few moves of his own Gable, but Gable dodged a dropkick from him at the lats second. Ryder decided to show some respect to his opponent, then Shelton got tagged in to give Ryder someone new to contend with. Shelton and Ryder went back and forth for a few moments until Ryder laid out his hand to shake Shelton’s. Shelton seemed to be down to show some respect to Ryder too, but it was all a ruse since he gave Ryder a quick Spinebuster that forced to him to roll out of the ring.

Once Ryder made his way back in, Shelton and Gable took turns weakening Ryder even more. At one point, Ryder laid in a quick punch to Gable. That did nothing but piss him off even more and cause him to lay in some stiff strikes to Ryder in the corner. When Shelton got back in, he looked to land something big on Ryder from the top rope. But Ryder saved himself by pushing Shelton down to the mat and then coming off the ropes to hit him with a Missile Dropkick.

Ryder finally got the hot tag to Mojo, who went on to land a big series of moves on Gable. After a flood of moves were handed to him, Gable recovered and got back at Mojo with a Belly to Belly Suplex and a beautiful Moonsault. Gable and Shelton then worked together to land a big tandem maneuver on Mojo, but it wasn’t enough to end him. Shelton tried striking down Mojo some more, but it did nothing but get him hype. The end of the match was almost at hand when The Hype Bros had a moment of miscommunication that led to Ryder eating a Paydirt. Mojo saved his boy before he met his end. However, he was unable to save Ryder after he got dropped by a Powerbomb/Clothesline Neckbreaker maneuver.

Highlights: “The Super Athlete” and “The Viper” quickly locked up and went toe to toe with counters. Orton got himself free from Rusev’s grasp and almost landed a match ending RKO, but Rusev slipped out of his grasp and slipped out to the outside. Once the match restarted, Rusev ended up flipping Orton to the outside and laying into him to force him down to the arena floor. Rusev followed him and used a Fallaway Slam to fling him into the crowd barrier. Rusev then threw Orton back into the ring and crushed him with strikes and a tight chinlock hold. Orton managed to escape, slip out of the ring and then catch Rusev off guard by dropping him back first onto the crowd barrier. This didn’t incapacitate Rusev for too long, though. Rusev got back to his feet and clotheslined Orton as soon as “The Viper” turned back to face him.

Both men got back inside the ring to continue their match. Rusev seemed to be in control again, but his cocksure attitude led to him running face first into the ring post. Orton took advantage of this mistake by nailing Rusev with his signature comeback offense. Orton looked to land his middle rope DDT, but Rusev countered him by landing another Fallaway Slam that was followed up by a roundhouse kick. Rusev then signaled for his Accolade submission, but Orton broke the hold and ran to the outside. This further angered Rusev, who chose to follow Orton to the outside and crack him with a Superkick. Rusev then looked to land a big splash from the top rope to Orton in the ring, but Orton moved out of the way just in the nick of time. Orton responded to Rusev’s top rope error by landing his middle rope DDT. Orton almost landed an RKO, but Rusev shocked him by getting up in time to almost lock in The Accolade. Orton slipped out just in time to land a nasty RKO that nabbed him the win.

Highlights: Ziggler decided to follow up Roode’s flashy entrance by arriving to nothing but boos. Once the match got underway, both men countered each other during their many starting exchanges. Roode’s cockiness out shined everything Ziggler tried to pull off. Ziggler found himself on the losing end of everything near the start as he was clotheslined and knocked down repeatedly. Ziggler finally got the upper hand when he dropped Roode’s neck over the top rope and then dropkicked him. Soon after, Ziggler controlled the offense as he kept Roode grounded for a good while. Ziggler finally locked in a sleeper hold and almost caused Roode to go unconscious. Roode woke back up, got to his feet and responded to Ziggler’s hold by landing a back suplex. Ziggler recovered and trued to ram his shoulder into Roode’s gut in the corner, but Roode moved and forced Ziggler to instead ram his shoulder into the ring post.

Roode then began landing his signature comeback moves on a now weakened Ziggler. Roode stayed on top of Ziggler for a while until Ziggler fed him a DDT. Ziggler locked in another sleeper hold, but Roode escaped once again. Roode’s back suplex counter failed this time though and led right to Ziggler landing his Fame Asser. Ziggler signaled for the Superkick and almost landed it, but Roode dodged him and landed a big Spinebuster. Roode tried to land his Glorious DDT, but Ziggler tried rolling him and using his tights to get the dirty win. Both men pulled the same trick on each other multiple times until Roode finally succeeded with it. After the bell rang, Ziggler fed Roode a Zig Zag and left the ring in a particularly pissed off mood…

Highlights: All three men almost locked up simultaneously, but then AJ and Tye focused their attention on Baron. Baron slipped to the outside, but both men decided to follow him. Baron then ran back into the ring, but AJ and Tye ran in with him and beat him down. Baron got beaten to the outside while AJ and Tye began pummeling each other. AJ got the better of their exchange when he landed a “Phenomenal” dropkick on Tye. AJ went for something big to follow that move up, but Baron tripped him up when he ran to the ropes. Baron ran into to work on Tye, but Tye dodged his offense and responded with some repeated top rope punches. Baron shook them off and pushed Tye to the outside and then began focusing on damaging the champ. At one point, Tye got himself back into the ring to land something big on AJ in the corner. AJ flipped out of Tye’s move, but Baron ran in to clothesline Tye then throw AJ right into him. AJ then got flung right into the bottom of the ring post.

Baron continued to control the match by preventing AJ from getting back into the ring while he worked on Tye. Baron made the mistake on going to the outside to work on the champ, but AJ woke back up in time to slam Baron into the crowd barrier. This pissed off Baron, who decided to send AJ right into the same crowd barrier. Baron ran back into the ring to lock in a submission on Tye while the crowd berated him. Tye broke the hold, which led to Baron finding himself on the ropes. AJ tried jumping back into the ring, but Baron clocked him in the jaw with a slick punch before he could. Baron then turned his attention right back to Tye. When AJ revived himself, he finally got a second wind by landing several strikes on the larger Baron. AJ was unable to keep Baron on his shoulders for a follow up move, but he was able to clock him with an Enzuguri.

AJ tried to land his Styles Clash, but Corbin proved too heavy to get hit with it. Baron found himself pushed to the outside and put on the receiving end of an AJ knee strike. Tye then got his second wind as he laid in “Perfect 10” punches on AJ and then one for Corbin on the ring apron. Tye then began landing his comeback maneuvers on the champ while Baron remained laid out. Soon, AJ looked like he was on the verge of landing a Styles Clash on Tye but Tye prevented it from happening. But Tye was unable to counter AJ’s next move – the Calf Crusher. Tye writhed in pain for a while and looked like he was close to tapping, but Baron pulled Tye right out of the Calf Crusher and straight to the outside. AJ followed Baron to the outside with an elbow assisted plancha. Back inside the ring, Baron fed Tye a Deep Six and then AJ a Chokeslam into a Backbreaker.

Afterwards, all three men exchanged corner strikes and other signature maneuvers with each other. After getting caught with a an AJ Pele, Tye fell right on top of Baron and almost got the winning pin. Bu Baron shoved him away before the 3-count. AJ woke up just in time to land his Springboard 450 Splash on Baron, but Tye broke up the following pin attempt. AJ and Tye then began landing stiff shots on each other. AJ finally rid of Tye with a Phenomenal Elbow, but Baron booted him to the outside and stole his pin to claim the title.