Getty Allen and his wife pictured together in Miami in May 2015.

Retired NBA superstar Ray Allen has been with the love of his life since 2004 with the couple sharing four beautiful children together. Allen, a two-time NBA champion and the league’s most successful 3-point shooter ever, married Shannon Walker Williams back in 2008 after four years together. Williams is famous in her own right as former member of Motown Records group Shades as well as being a graduate of Northeastern University. Nowadays, Shannon is better known as a TV chef while she and her husband seek to reinvent fast food in America.

Here’s what you need to know about Mrs. Ray Allen:

1. Allen Says His Wife Was Harassed by His Cat-fisher, Bryant Coleman, at Her Restaurant

On November 21, Allen appeared in court in Orlando to deny charges of stalking, reports ESPN. While Allen countered that the many accusing of him of stalking, Bryan Coleman, was catfishing the former Miami and Boston superstar. A motion filed on Allen’s behalf read, “Coleman pretended to be a number of attractive women interested in Ray Allen. Ray believed he was speaking with these women and communicated with them.”

Allen continued by saying that he came to a settlement with Coleman where the alleged cat-fisher agreed to stop contacting Allen. Though Allen says Coleman continued with his harassment. The affidavit says Coleman “posted about Ray’s wife, Ray’s children, Ray’s dog, Ray’s homes, Ray’s wife’s restaurant, and numerous other personal items. Coleman not only posted about these things, he would actually post while physically located inside Ray’s wife’s restaurant in Orlando. And he would make sure they knew it, tagging Ray and his wife on those posts.”

2. During Her Life With Shades, Shannon Says She Lived on Coca-Cola, Coffee & Chicken Wings

In a 2011 interview with Wellesley Weston Magazine, Shannon said during her music career she lived on a diet of “Coca Cola, coffee and chicken wings.” Shannon expanded on this in an interview with ESPN saying, “No, I was the person that everybody would cook for in the family. You know how it is in big families: food was about comfort for us. But when Ray and I started dating like 20 years ago, I realized how important food was to his life, and that food was really a tool for him. I started meeting with Ray’s team nutritionist at the beginning of every season and asking, ‘What’s his body fat? How much does he weigh? What’s his BMI? What does he need less of? What does he need more of?’ And then I’d try to incorporate that into our meal planning.”

In June 2016, USA Today reported on Shannon opening a health fast food restaurant in Florida. Shannon said about the idea, “In this country if you want to eat burgers, fries, hot dogs, pizza or fried chicken, you are golden, you can get those things everywhere, without getting out of your car. But if you want wild caught salmon or drug-free natural meats without going to a fine dining restaurant, or have kids with special dietary needs, you are out of luck. It’s no judgement against fast food – I love fast food, I have five kids, I’ve driven around with the car seats, that’s why I’m doing this.”

Shannon told ESPN that in 2008 when Allen went to play in Boston, she came up with idea of a sports-related cooking show. It was titled Pre Game Meal and it aired on CSN in Boston. In March 2017, Allen and Shannon opened a cafe in her hometown, Middletown, Connecticut, reported the Middletown Press. The cafe is tied to Wesleyan University.

Shannon confessed in a 2012 interview with CBS Miami that Type 1 diabetes had nearly killed her and Allen’s son, Walker. Shannon told ESPN that Walker had been diagnosed in 2008 while Allen was en route to winning the NBA Championship with the Celtics.

4. Shades Released 1 Album While She Went on to Try to Make it as an Actress

Shannon was one of the founding members of Shades along with Danielle Andrews, Tiffanie Cardwell and Monique Peoples. The group was formed while all four were students at Northeastern University in Boston. In 1997, Shades released their only album, the self-titled Shades. They were signed to the iconic Motown Records. The lead single, “Tell Me (I’ll Be Around),” peaked at number 50 in the Billboard Hot 100. The second single, “Serenade,” got to 88 while their third single didn’t chart. The group split later in 1997.

After leaving the music business, Shannon tried to make it as an actress, appearing in movies such as Girlfight in 2000, Spike Lee’s Bamboozled also in 2000 and Britney, Baby, One More Time in 2002, according to her IMDb page. A Complex feature on the wives and girlfriends of Miami Heat players speculated that perhaps it was the couple’s Spike Lee-connection that helped them get together. In 1998, Allen starred as Jesus Shuttlesworth in Lee’s He Got Game.

5. Despite Her Success With Food, Shannon Says She ‘Will Never Stop Singing’

During her 2011 interview with Wellesley Weston Magazine, Shannon said:

I’ll never stop singing. Most of the time right now, I sing to the kids and along to the radio. I did get to sing “At Last,” an Etta James song, at Symphony Hall, for the Joslin Center.

It was amazing to have so many instruments playing behind me, all these talented musicians with the Boston Symphony Orchestra.

While when asked about the future, Shannon said that she had formed a business, Life After Basketball, with her husband and had made documentary about an orphanage in China for blind children. 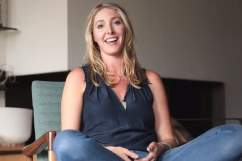