Jose Canseco is in the news today after a series of questionable tweets. The former baseball star, who was named the 1988 American League MVP, went on a bit of a rant on Tuesday, sharing some interesting information with his 500,000 followers.

His messages were posted on the same day that Roy Moore lost the Alabama Senate Race to Democrat Doug Jones. As most people know, Moore has been accused of sexual misconduct by a number of women, four of whom claim that they were in their teens at the time.

One of these women, Leigh Corfman, was just 14 when she says Moore came on to her.

“Leigh Corfman was the first woman mentioned in the Washington Post article that broke the story of Moore’s alleged sexual misconduct. She said she was 14 years old when the 32-year-old Moore made unwanted sexual advances toward her.”

Another woman, Wendy Miller, claims that she was approached by Moore when she was also just 14.

“Wendy Miller said Moore approached her for the first time when she was also 14. She said she was working at the Gadsden Mall in Alabama when she was 16 and he and started asking her out. Miller’s mother didn’t allow her to go out with Moore.”

While it’s unclear if Canseco’s messages were directly about the Roy Moore scandal, it’s hard to assume differently, given the context of his tweets. Not only did Canseco specify that he was referring to “politicians,” but he also said that he himself had been molested in the past — by several women — and he went on to say that “it was kind of a turn-on.”

You can see Canseco’s tweets below.

Canseco then went on to address his feelings on the women that have been coming forward as part of the #metoo movement.

According to Fox News, Canseco’s comments could cause him to be out of work. Although he is no longer working for NBC Sports California (his contract ended after the 2017 baseball season), his comments aren’t going unnoticed.

“Jose Canseco is no longer an employee with NBC Sports California. His agreement with us ended after the 2017 baseball season. We certainly don’t agree with his comments, which do not reflect the values of our network or our team partner,” NBC Sports California said in a statement.

A statement from the Oakland A's. pic.twitter.com/TREZpby3nU

After attracting quite a bit of attention for his insensitive tweets, Canseco asked why people cared so much.

Canseco then switched gears, perhaps trying to capitalize on the attention that he was receiving. His next string of tweets attempted to promote his new show, Renegades, which will be at Caesar’s Palace in Las Vegas. Further details about the show haven’t been made available, but Canseco says that he teamed up with Jim McMahon and Terrell Owens for the gig. Of course, it’s entirely possible that Canseco will be asked to sit out following his comments about being molested, which seemingly mocked the stories that have come out over the past several weeks.

Canseco ended the night with tweets about casinos and bitcoin. His Twitter account has been quiet for the past 19 hours. 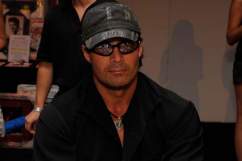