Getty Dez Bryant and the Cowboys are still in contention for an NFC playoff spot.

The term statement game is often used to describe a team earning a signature win during the NFL season. There were several of these games during Week 15, but none bigger than the Rams defeating the Seahawks in Seattle by 35 points. The Rams are the new class of the NFC West, and the high-powered L.A. offense had no problems in the Pacific Northwest as Todd Gurley ran all over the Seahawks defense.

For as much as the game put the entire league on alert on the Rams capibilities, it was just as much a statement on how the Seahawks have fallen away from the NFL’s elite teams. While the Seahawks are still in contention for a playoff spot, Seattle used to be an impossible place for opponents to compete, much less dominate the Seahawks. Injuries, poor offensive line play and a lack of a rushing attack have put Seattle’s postseason hopes in doubt.

Statements sometimes come from familiar faces as the Patriots pulled off a thrilling comeback on the road against the Steelers. It was not the Patriots most dominant performance, but it was a reminder that the Patriots are still the Patriots as the win clinched the AFC East for New England.

Speaking of statements, Jacksonville had not made the playoffs since 2007, but the Jaguars victory over the Texans punched their ticket to the postseason. With a run game and a defense that will travel, don’t be surprised if the Jaguars are able to make a deep run come January.

Here’s a look at our latest NFL power rankings.

GettyCase Keenum has done an amazing job with the Vikings offense this season.

It wasn’t pretty, but the Patriots came up big when it mattered most. On the verge of suffering their second straight loss, the Patriots pulled off a fourth quarter comeback to defeat the Steelers, and win the AFC East title. According to ESPN, it is an NFL record ninth straight division title. The win over Pittsburgh puts New England in prime position to also be the top seed in the AFC, and secure home field advantage throughout the playoffs.

The Patriots will be favored in their remaining two games against the Bills and Jets. New England survived a brutal stretch of games as the Patriots were the road team in five of their last six games. The Patriots went 5-1 during this road-heavy part of their schedule.

Minnesota is your 2017 NFC North division champions after their dominant win over the Bengals. Heavy also projects the Vikings to be the top seed in the NFC when the season ends. We like the Vikings chances of winning their final two matchups against the Packers and Bears.

While it has no bearings on the postseason, it was nice to see Teddy Bridgewater make his return to football after spending over a year recovering from a dislocated knee and torn ACL.

While playing the Giants is not the most difficult test, Nick Foles impressed in his first opportunity to take over for an injured Carson Wentz. Foles went 24-of-38 for 237 yards and four touchdowns in the Eagles win over the Giants. It may not be the kind of numbers Eagles fans have grown accustomed to under Wentz, but it was a nice opening outing for Foles’ first start of the season.

Things get a bit more difficult next week against the Raiders. They also have a challenging Week 17 matchup against the Cowboys as Philly looks to secure home field throughout the playoffs.

No. 4 Los Angeles Rams
Last Week: Defeated the Seahawks 42-7
Next Week: at Titans

It’s not surprising the Rams defeated the Seahawks, but it was the way they won in Seattle that has the NFL’s attention. Los Angeles handed the Seahawks their biggest home loss that we have seen in quite some time. Todd Gurley had himself a day rushing for over 150 yards along with four total touchdowns.

The only question on the Rams’ resume is their losses to the other top NFC teams, the Eagles and Vikings. The Rams will most likely face one of these two teams in the playoffs if they are hoping to make a Super Bowl run.

No. 5 Pittsburgh Steelers
Last Week: Lost 27-24 to Patriots
Next Week: vs. Texans

For most of the game it looked like the Steelers were going to try to make their claim for the top playoff spot in the AFC. Instead, the Steelers were shutout in the fourth quarter, and allowed the Patriots to pull off a comeback victory. Bigger than the loss is the health of star receiver Antonio Brown, who suffered a partially torn calf muscle against the Patriots.

According to NFL.com, the Steelers are hoping Brown can return for the playoffs, but this is not the kind of injury a team wants to deal with heading into the playoffs.

Given the state of the Jaguars franchise in recent years, football fans may have thought the world was ending when an alert ran on the bottom ticker noting Jacksonville had clinched a playoff birth. The Jaguars have been puzzling to watch as GM David Caldwell has consistently done well (on paper) in the NFL draft, but the team was unable to reach their potential under Gus Bradley. A lot has been made about Tom Coughlin’s return to Jacksonville, but Doug Marrone also deserves a lot of credit for the turnaround down in Duval County.

Blake Bortles continues to be judged based on preseason memes, rather than his play on the field this season. Jacksonville is now winning, in part, thanks to Bortles, rather than in spite of his performance as the Jags were doing at the beginning of the season. Bortles had his second 300 yard outing in three weeks with 326 yards and three touchdowns. The most impressive stat is the zero in the interception column.

The Panthers survived the return of Aaron Rodgers to win their sixth game in seven outings. Christian McCaffrey had one of the better games of his young career with 136 total yards and a touchdown. Cam Newton was also impressive throwing for 242 yards and four touchdowns along with 58 rushing yards.

All signs point to an epic NFC South battle on New Year’s Eve between the Falcons and Panthers with both teams looking to secure a playoff birth.

Things were tighter than expected as the Saints hosted the Jets, but New Orleans did enough late in the game to secure a victory. Mark Ingram’s long fourth quarter touchdown run iced the game as Ingram had 151 total yards and two touchdowns. New Orleans will look for revenge this week against their NFC South rival Falcons as the two teams, along with the Panthers, continue to compete for the division title.

The Falcons continue their final stretch of only NFC South opponents, which could end up working in Atlanta’s favor as they have been trying to gain ground on the Saints and Panthers. While nothing is a given, the Falcons are expected to take care of business against the Bucs, which would set up a massive rivalry matchup next week against the Saints.

Atlanta was able to pull off the upset in Week 14, but this matchup will be more challenging for a couple reasons. The Saints get to host the game this time as Atlanta attempts the tall task of defeating the same team twice in three weeks.

It was not the cleanest victory, but a Derek Carr fumble into the endzone keeps the Cowboys postseason hopes alive. There’s little time for celebration in Dallas as the Cowboys host the Seahawks who are also competing for a playoff bid. The Cowboys will need to win their remaining two games, and likely get a bit of help to make the postseason given the strength of the NFC.

The good news for the Cowboys is Ezekiel Elliott returns in Week 16 to give Dallas a bit of a boost as they look to make the playoffs. 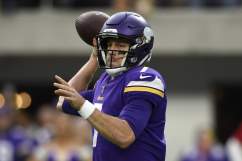