Getty The 2017 Heisman Trophy will be awarded tonight in New York City.

The 2017 Heisman Trophy award ceremony will be tonight at 8 p.m. Eastern on ESPN. While the broadcast begins at 8 p.m., fans can expect to wait until the last few minutes of the hour-long broadcast for the winner to be announced. ESPN has a history of building up the suspense during the telecast with interviews and various stats while waiting until the very end to announce the winner.

Baker Mayfield, Bryce Love and Lamar Jackson are the three finalist for the 2017 award. Quarterbacks have won the Heisman Trophy is six of the last seven seasons. Mayfield is a heavy favorite to win tonight’s award.

In an ESPN poll with 12 college football analysts, Mayfield received 11 of 12 first place votes. Love came in second while Jackson finished third in the poll. There are a number of factors that make Mayfield the clear favorite, including being the only one of the finalist playing in the College Football Playoff. In addition to leading Oklahoma to a successful season, Mayfield put up some of the best numbers in the country. Mayfield threw for 4,340 yards, 41 touchdowns and 5 interceptions while completing 71 percent of his passes. He also rushed for 310 yards and five touchdowns. Mayfield was a finalist for last year’s award, and finished third in the voting.

Mayfield has had some off-field challenges, and the Oklahoma quarterback could lose votes based on his behavior. ESPN’s Joe Tessitore reported some voters have admitted they will not vote for Mayfield because of his antics (via 247 Sports).

66 percent said not at all [Mayfield’s behavior would impact their voting], but 11 percent said very much so. Baker Mayfield is not receiving 100 percent of first-place votes for the first time in weeks. Lamar Jackson went from fifth to third, but he’s running out of time during a season that might be better than last — when he won the Heisman Trophy.

While Mayfield is likely to lose some votes, don’t expect it to have a major impact on the outcome. Love and Jackson could end up with a few more first place votes, but it is not expected to keep Mayfield from winning the award.

Traditionally, ESPN spends the first 45 minutes of the broadcast interviewing the finalists and their families. They also show a feature video recapping each finalist’s season. At the end of the hour-long show, all the past Heisman Trophy winners in attendance stand on stage as the winner is announced. The night concludes with this year’s winner receiving the famous trophy, and offering an acceptance speech. For fans wishing to just see who has won the 2017 award, fans can tune into the final part of the broadcast for the Heisman Trophy presentation.

One interesting note, Jackson will likely stand on stage given he was last year’s winner, but he is also a finalist for the 2017 trophy. 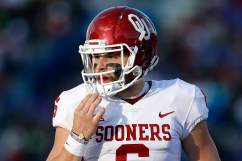