Alabama’s Kyriq McDonald collapsed on the sideline, according to ESPN. https://t.co/8ztBEQkIq6

Kyriq McDonald collapsed on the sideline during Monday night’s National Championship Game. The video above shows the Alabama freshman being taken off the field on a stretcher. An update on his current condition has not been released.

According to ESPN, the scary collapse was called a “non-athletic medical issue” by a team spokesperson.

McDonald passed out at the end of the third quarter. He had been standing near the team’s bench when he just fell to the ground. Photos showed him surrounded by the team’s staff. The 195-pound Cornerback from Madison, Alabama, was conscious as he was taken to the locker room to be evaluated, according to SB Nation, which is a good sign.

Scary situation in Atlanta: #Alabama DB Kyriq McDonald has collapsed on the sideline. A stretcher is out. @newnewspage pic.twitter.com/bIMKDXZf8s

“The freshman defensive back is being loaded onto the medical cart. He’s awake and conscious right now. It was a serious situation with him surrounded by medical staff, he apparently just collapsed in the bench area of the Crimson Tide. Glad to see his eyes open right now. He was nodding during some of the prompts that the training staff was giving him. Obviously, we’ll update you as we go along, but it was good to see him awake and alert and give a little bit of a smile there as he heard the crowd shout at him,” ESPN’s Tom Rinaldi said during the live broadcast.

Not long after his collapse, Twitter lit up with well wishes and prayers sent for the team’s defensive back. You can read some of those thoughtful messages below.

Hoping and praying all is well with Kyriq McDonald #rolltide

Praying for Kyriq McDonald and his family.

According to the Alabama Crimson Tide website, McDonald has not played in a single game this season. Below is a bit of information about his football stats.

“[He] arrived at Alabama in January 2017 as one of the top athletes and defensive backs in the state … participated in spring drills … four-star recruit by Rivals rated the No. 24 cornerback overall and No. 16 player in Alabama … tabbed a three-star prospect by Scout, ESPN, 247Sports and the 247Composite … ranked as the No. 41 cornerback in the country and No. 2 in Alabama by Scout.”

Any time an athlete collapses during a practice or a game is cause for alarm. Regardless of which team you are rooting for, no one wants to see someone get hurt or fall ill. Last month, Pittsburgh Steelers linebacker Ryan Shazier got injured during a play and ended up being paralyzed from the waist down.

Shazier had attempted to make a tackle on Cincinnati Bengals wide receiver Josh Gordon when he went down on the field. He grabbed for his lower back, clearly in extreme pain. He rolled over and appeared to signal for help, his lower body was not moving.

A few days ago, WPXI-Pittsburgh reported that Shazier has regained feeling in his legs.

“He’s a long way from where he was on that Monday night when he was laying on the field,” his dad, Vernon Shazier, told WPXI-Pittsburgh. Football fans have been so relieved to hear that Shazier’s condition is improving.

This post will be updated with information as it becomes available. 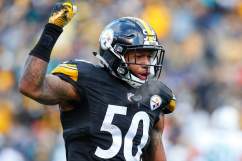