Ryan Shazier was injured during the Pittsburgh Steelers vs. Cincinnati Bengals game on Monday night. Shazier had attempted to make a tackle on Cincinnati Bengals wide receiver Josh Gordon when he went down on the field. He immediately reached for his lower back, writhing in pain for a few seconds before rolling over. He appeared to signal for help with his hand and went to remove his helmet before he was surrounded by Pittsburgh medical personnel.

As he was placed on a backboard, he was laying completely still and appeared to be unable to move his legs. This led many to believe that he may have suffered a back injury that caused paralysis from the waist down.

Shazier, 25, used his hands to cover his face while he was carted off the field, clearly in excruciating pain.

He was taken to the hospital by ambulance and underwent a CT Scan and an MRI, according to an official statement from the team’s general manager and vice president, Kevin Colbert. You can read that statement below.

Below is the latest update on Shazier as of Thursday, December 7.

Within seconds of Shazier’s injury, Twitter lit up with posts about how gruesome the injury was.

“Oh man that ryan shazier injury is one of the scariest football injuries i’ve seen…. i hope he’s okay oh my god,” wrote one Twitter user.

“Put your college and pro differences aside and come together as a football community and support Ryan Shazier after that injury. That made me cringe. Red and silver, black and yellow, doesn’t matter. Just hope that he is ok. He is a great defensive player,” added another.

“Prayers up for Ryan Shazier and the guys looking after him right now. That injury looked terrifying,” wrote a third.

Many people have been wondering about Shazier’s condition, particularly because he appeared unable to move his lower body immediately following the injury. A spinal cord injury can cause a person to be paralyzed — either temporarily or permanently. According to UPMC, this happens because the nerves in the back can’t “send messages properly.”

“Spinal cord injuries usually occur when the back is damaged by a strong blow to the area such as from an automobile accident or a diving accident. When a spinal cord injury occurs, the damaged nerve pathways can not send the messages properly. The person loses sensation and control of the muscles. The extent of the damage depends on the location of the spinal cord injury.”

There are various ways in which a spinal injury can be treated. Many patients with back injuries require surgery, so hearing that Shazier underwent surgery isn’t surprising. It is unknown if he will need additional surgeries in the coming weeks. Shazier may also need physical therapy, which is not uncommon when it comes to back injuries. While it did appear as though Shazier’s injury was season-ending, Colbert’s statement seemed optimistic. If Shazier is able to travel back to Pittsburgh sometime today, that is a good sign.

Football have been hoping that Shazier’s injury was not as bad as it looked. That is still the hope as the days go on. 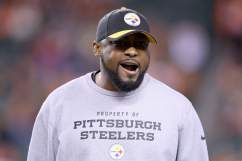 Who Did the Steelers Draft in the First Round?