Lindsey Vonn is currently single, according to the site, Who’s Dated Who. The Olympic Alpine Skier had been dating Kenan Smith, a former NFL assistant coach, for about a year before calling it quits back in November.

“Unfortunately, their busy schedules ultimately took a toll on the relationship. It was amicable and they are still friends. Lindsey is laser-focused on her training for the upcoming Olympics and is leaving the country for several months to start competing,” a friend of Vonn told People Magazine at the time.

Vonn is set to return to the Winter Olympics, competing in speed events in PyeongChang, South Korea. Vonn was forced to miss the 2014 Olympics in Sochi after suffering a knee injury — something that she’s all too familiar with. Vonn has previously had three seasons — 2013, 2014, and 2016 — end early due to crashes.

“While most of Vonn’s victories have come in the speed disciplines of the downhill and Super G, she’s the rare elite skier to have won races in both speed and technical events. She owns four giant slalom wins, two victories in the slalom, and five in the combined, which mixes the downhill and slalom.Her 39 wins in the downhill, and 28 in the Super G are an all-time mark. She’s tied with Stenmark for most discipline titles, with 16. Vonn has been the best downhill skier in eight different seasons, while also winning 5 Super G titles and 3 championships in the combined,” Time Magazine reports.

If Vonn is dating someone, she has not gone public with him. It is possible that a new guy could make his debut during the upcoming Olympic games, perhaps supporting her from the sidelines.

Prior to dating Smith, Vonn was linked to Canadian actor Alexander Ludwig. According to Page Six, the two dated in mid-2016. They were spotted together taking in a Clippers game at the Staples Center in Los Angeles in April of that year. Their rumored romance didn’t last very long, however, as the two were only spotted together a few times before Vonn began dating Smith.

Back in 2012, Vonn started dating pro-golfer, Tiger Woods. Their relationship took off like lightning in a bottle, going strong for three years. The two were pretty much inseparable, supporting each other in their respective sports. Vonn was a very big part of Woods’ life and even met his two kids, Sam and Charlie (their mom is Woods’ ex-wife, Elin Nordegren).

Vonn was previously married to fellow skier, Thomas Vonn. The two met at the Olympic Games in Salt Lake City when Vonn was just 16 years old — Thomas Vonn was 25. They wed in 2007, but got divorced in 2011.

“It is with great sadness that I announce that Thomas and I have begun divorce proceedings. This is an extremely difficult time in my personal life and I hope the media and my fans can respect my need for privacy on this matter. I will continue to be coached by the U.S. Ski Team and look forward to competing the rest of the season,” Vonn told The Denver Post at the time. 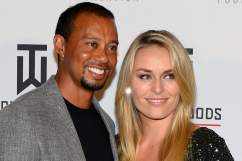