Getty Mariota's first career postseason TD pass was to himself.

Marcus Mariota is playing his first career NFL playoff game in Kansas City, and his first TD was one-of-a-kind.

On a third and goal, Mariota spent what felt like an eternity in the pocket before rolling to his left. He stepped forwards to throw, but his pass was deflected. Mariota caught HIS OWN PASS and scored for the Titans first touchdown.

Mariota really did throw a touchdown to himself, in the playoffs pic.twitter.com/hv1B0midRg

It wasn’t an easy start for Mariota, who threw a costly interception from the Chiefs 21-yard line in the first half. But the Titans responded nicely with the first drive of the second half, and at the very least gave them a chance to win this game.

The real winners are the fantasy football players. If you had the stones to start Mariota in your DFS lineups, he just scored both a passing touchdown and a receiving touchdown. That play alone puts him ahead of Alex Smith, who lit up the Titans for two scores in the first half.

The grounds crew will be out to scrape the rest of Mariota off the field during halftime https://t.co/Hw8CQMOoO8

Even if the Chiefs blow away the Titans in the second half, the NFL Playoffs have already given us an all-time highlight. And for Mariota, who is expected to be in the NFL for some time, it’s an incredible way to start a postseason career. 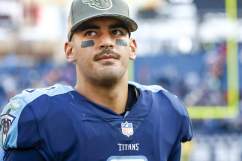 Marcus Mariota & Girlfriend Kiyomi Cook Have Made a Home in Nashville