Anastasia Bryzgalova started curling in 2009. At the time, she had seen “an advertisement for a curling club at an ice sports complex,” according to the Daily Mail — and she was intrigued. She decided to give it a try, pursuing a career in the sport, and, it turns out, she’s pretty good at it.

Bryzgalova, 25, and her husband, Alexander Krushelnitskiy, are curling partners. They are competing in the 2018 Winter Olympics in PyeongChang, South Korea. On Tuesday, February 13, they will play their final match. If they win, they will take home a bronze medal.

Some people watching the Winter Games couldn’t help but notice Bryzgalova, who became the talk of the internet because of her looks. When she’s not curling, she stays active by hitting the gym and playing beach volleyball.

1. She Has Taken the Internet by Storm & Is Being Compared to Megan Fox

Not long after Bryzgalova appeared on television, the internet lit up with posts about her, many comparing her to actresses Angelina Jolie and Megan Fox. Perhaps it’s the long brown hair or her striking blue eyes, but Bryzgalova is causing quite the frenzy.

“I don’t really understand curling but Anastasia Bryzgalova has made me a fan,” added a third.

And the comments didn’t stop there. Hundreds of people have been pointing out just how good looking they think Bryzgalova is, and they can’t wait to see her compete again.

2. She & Krushelnitskiy Lost Their First Match in PyeongChang to a Team From the United States, But Are Still in Medal Contention

Just as the Olympics were getting started, Bryzgalova and Krushelnitskiy found themselves on the losing end of their very first match. Team USA’s Matt and Becca Hamilton, a brother and sister team from Wisconsin, beat the Olympic Athletes from Russia team 9-3.

Bryzgalova and Krushelnitskiy lost 8-2 to Canada on February 10. They lost their next two games against Switzerland, but are still in medal contention.

The Olympic Athletes from Russia will compete in their final game on Tuesday, February 13, against Norway. The winner of that game will win a bronze medal.

3. She & Krushelnitskiy Won a Gold Medal at the 2016 World Championships

Bryzgalova and Krushelnitskiy took home a gold medal in the 2016 world championship, beating China’s Ba Dexin and Wang Rui 7-5 in the final.

Although Krushelnitskiy and Bryzgalova were knocked out of the World Championships the following year, they still qualified for the 2018 Winter Olympics.

“In the classification matches, Krushelnitskiy and Bryzgalova would go on to beat Ireland, Scotland and the US pairing of Matt and Rebecca Hamilton to finish the tournament in ninth overall. Despite the early exit, they still picked up enough points to comfortably qualify for Pyeongchang thanks to their title from the previous year,” their Olympics bio reads, in part.

4. She Is Married to Her Curling Partner, Alexander Krushelnitskiy

Bryzgalova recently tied the knot. She married her curling partner, Alexander Krushelnitskiy, on June 13, 2017. Bryzgalova shared a couple of photos from her wedding day on Instagram.

The couple exchanged vows at Russian’s well-known Matrimony Palace in St. Petersburg. It’s one of the most popular wedding locations in the whole country.

“The magnificent marble staircase is the favorite place for wedding photo sessions. Due to its popularity, some couples have to wait for up to six months to marry here, especially given it’s not only St. Petersburg residents who want to get hitched in the palace, but people from all over Russia. Many of the country’s celebrities have also chosen this spot to tie the knot,” according to Russia Beyond.

The newlyweds posed for photos at the English Quay, one of the most popular streets in St. Petersburg.

“The English Quay (called the Angliskaya in Russian) was a very fashionable address and it was the home of members of the aristocracy including the Grand Dukes. It was quite close to the Winter Palace and most of the government ministries were nearby. Its’ proximity to the port also made it a good location of the residence of the American Ambassador, which he leased at his own expense from a Russian noble,” according to the Alexander Palace website.

5. She Has a Degree From Lesgaft National State University of Physical Education, Sport & Health

Bryzgalova isn’t just a pretty face. She obtained her masters degree from Lesgaft National State University of Physical Education, Sport and Health, according to the Daily Mail.

The school, named after Russian teacher and physician, Peter Lesgaft, is located in St. Petersburg, Russia.

It is unclear what Bryzgalova studied. 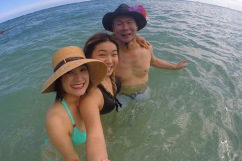